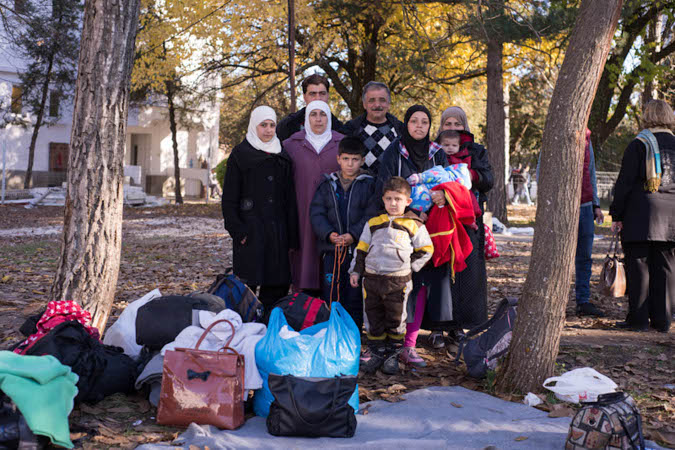 Whole families are on the move and pass through the one stop center in Presevo, Serbia. Photo: UN Women / Mirjana Nedeva

Women and children now represent the majority, with over 60 per cent of refugees arriving in Greece, according to data from the UN High Commissioner for Refugees. The vast majority are women who have experienced war in Syria, Iraq and Afghanistan. Many have witnessed or survived sexual violence, torture, bombings, kidnappings of loved ones, slavery, trafficking and other wartime atrocities. It is important that reception and resettlement facilities be designed and operated in compliance with gender responsiveness standards.

In the context of the European Council meeting held today and tomorrow, UN Women calls for the specific needs and vulnerabilities of women and girls to be addressed in the response to the refugee and migration crisis. The detention of women and girl asylum-seekers, especially pregnant and lactating women, must be avoided. UN Women is concerned about the serious medical and psychological challenges migration related trauma causes for women and girls.

UN Women also emphasizes the importance of family reunification to support the integration of asylum-seekers within the European Union, and reduce the attractiveness of illegal migration routes. Equally, it is important for women to have the right to make independent claims for asylum, regardless of the situation of other members of their family. Evidence shows that women and girls who are survivors of violence or other abuses rarely report them to appropriate authorities and gender-responsive measures need to be taken to mitigate this risk.

Many EU States and Turkey are signatory to the Council of Europe Convention on preventing and combating violence against women and domestic violence, (the Istanbul Convention) which provides for the protection of refugee women against violence and requires that gender-based violence be recognized as a form of persecution in line with the UN Refugees Convention. UN Women stands ready to collaborate with all partners in the UN system, the European Union and in all concerned countries, to ensure a gender-sensitive response in conformity with human rights standards.

Related News
11/04/2022
Speech: Women’s involvement is both a right and an opportunity for better outcomes
09/12/2021
In the words of Rahime Hasan: “We should not overlook the place of men in the fight against violence”
18/05/2016
Civil society refugee advocates forge recommendations ahead of World Humanitarian Summit in Istanbul
04/05/2022
Ukraine: New UN Women and CARE report highlights disproportionate impact of the war on women and minorities
12/04/2022
Executive Director meets with Ukrainian refugees and Moldovans leading the humanitarian response
END_OF_DOCUMENT_TOKEN_TO_BE_REPLACED