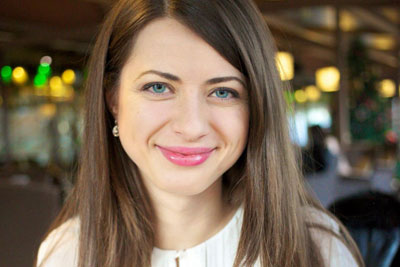 Cristina Arama is a journalist with the Unimedia.info news portal in the Republic of Moldova, who took part in the UN Women-led training and periodic self-assessments. Photo Courtesy of Cristina Arama.

Cristina Arama, a reporter at the Unimedia.info news portal in Moldova, used to only request interviews from men when she had to write an article about politics or economics.

“Women often appeared in articles under the social or style sections of our news portal and accounted for only 10 per cent of all the presence in the political or economics section. I, as journalist, didn’t have a serious attitude towards women,” admits Ms. Arama. Now, the 25-year-old believes it is “an absolutely false justification to assume that there are not many experienced women experts in Moldova.”

This change in perception happened after she took part in a self-assessment exercise where media had to evaluate their gender sensitivity. The exercise was initiated and run by UN Women in Moldova with financial support from the Swedish Embassy and in collaboration with the Association for Independent Press (AIP) and Partnership for Development Centre, in 2013.

However, UN Women’s work with Moldovan media on gender-sensitized reporting traces back to 2009, when the office began working with Alina Radu, Editor-in-Chief of the Ziarul de Garda newspaper, to develop a set of indicators for media to monitor how women were portrayed in sports, the economy and social fields.

"This was extremely successful and the participating media began to understand the societal implications of ‘gender blindness’," explains Ulziisuren Jamsran, UN Women’s Representative in Moldova. 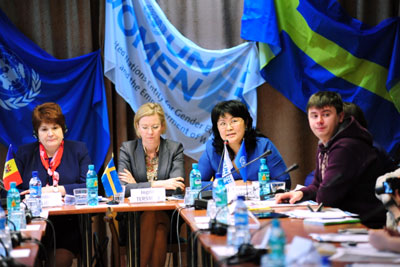 Participants took part in a round table on "The role of media in covering women's participation in public life," with representatives of civil society and government, in February 2014. Photo: UN Women/Iurie Mardari.

From 2012 to 2013, the project expanded and 17 print and online media outlets took part in more comprehensive monthly self-assessment exercises over the course of nine months. The organizations came together every quarter to review their findings. This peer pressure motivated them to show progress each time they met. They also worked with peers in other news outlets to promote gender sensitivity in their reporting. As a result, 29 organizations pledged to create a gender platform to advocate for gender equality and human rights.

“After the analysis, we conducted several meetings in the newsroom and talked about the changes we needed to make; from the way you write a women’s position* to a balanced presence of women in the news in relation to men,” said Ms. Arama, who took part in the monthly self-assessments.

An analysis by AIP found that since the self-assessment exercises began, gender-balance had increased in their news reporting. “The data recorded in each of the three quarters of self-evaluation shows that the share of men in the news registered a decline of 13.5 percentage points from the beginning of the self-assessment exercise,” said Peter Macovei, Executive Director of AIP.

Meanwhile, the visibility of women news protagonists in the 17 media outlets nearly doubled, increasing from 16.7 per cent in February to 28.6 per cent in October 2013.

Mr. Macovei underlined that the assessments proved to be effective, with positive results “correlated with exposing the editors and journalists to thematic trainings on gender equality and also reviewing the editorial policy from a gender perspective.”

Oxana Diaconu, a participating journalist from the newspaper Unghiul from Ungheni city, 105 km north-west of the capital, Chisinau, says she now approaches more women as sources for stories related to politics, economics or business. “Statistics showed that women rarely appeared in our news, or were presented as housewives or appeared only in the education and medicine areas and less in politics, economics or business articles,” she admitted. 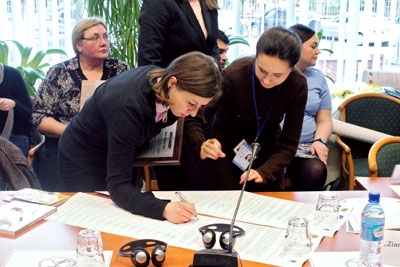 Journalists signed the Commitment for a balanced presence of women and men in the news, in February 2014. Photo: UN Women/Iurie Mardari.

The media gender self-assessment exercise has contributed to the promotion of women in all spheres of life, especially in politics, by media organizations in Moldova. In 2014, when UN Women launched an advocacy campaign on gender quotas, their relationship with gender-sensitive media was so strong that, within one day, they were able to mobilize a large number of media organizations to put pressure on decision-makers. As a result, a law to establish gender quotas on electoral lists passed its first hearing in Parliament.

Advancing gender-sensitive journalism, however, is a work in progress that requires continuous and consolidated efforts. “The ground we have covered with the print and online media regarding gender-sensitivity is not yet feeding through to the population and many media outlets still remain relatively unresponsive to the need for gender awareness,” cautions Ms. Jamsran.

To deepen efforts, in June 2015, UN Women will launch its next round of training, targeting audiovisual media, which has the biggest reach.

* In Romanian, high-level positions and other nouns are assigned as either masculine or feminine and journalists tend to avoid using the female form for women.

Stories of survivors portrayed by journalists in Georgia

In Focus editorial package on Women and the Media, Beijing+20 campaign website