With support from UN Women, women leaders in the Balkans are putting gender issues at the centre of politics and fueling women’s empowerment in order to bring peace and stability to the region.

Through the cracks of a tragic history, decades after the disintegration of Yugoslavia and the subsequent conflicts that engulfed the Balkans in the 1990s, a powerful group of women are uniting to overcome ethnic and political differences and build a better future. 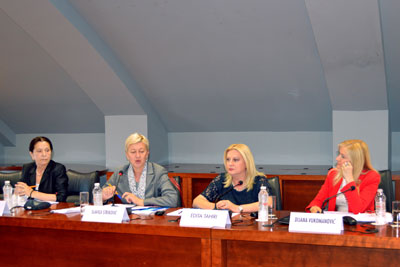 (From left to right) Memnuna Zvizdic, Slavica Strikovic, Edita Tahiri and Dijana Vukomanovic discuss the role of women in speeding up the implementation of the Brussels Agreement at the International Conference in Saranda, Albania. Photo: Art Murtezai/UN Women

With financial support and sustained technical assistance from UN Women, the Regional Women’s Lobby for Peace, Security and Justice in South East Europe (RWLSEE) is working to fuel women’s empowerment, include a gender perspective in politics and boost women’s participation in decision-making across the Balkans. Founded in 2006, the group gathers influential women political and civil society leaders from Albania, Bosnia and Herzegovina, Croatia, Kosovo (under UN Security Council Resolution 1244)1, The Former Yugoslav Republic of Macedonia2, Montenegro and Serbia.

“RWLSEE is a unique organization, the only one in the region which gathers women leaders from seven countries. It shows that it is possible to make peace after a troubled past, work together to find common issues, go beyond the differences, push forward a positive agenda by putting history behind,” says Edita Tahiri, Deputy Prime Minister of Kosovo and Chairwoman of the RWLSEE.

As one of the founders of the RWLSEE, Ms. Tahiri says the organization believes women have a crucial role to play in bringing peace and stability to the Balkans. They want to see more empowered women in the region — a feat that requires collaboration and a unified vision.

“In the beginning it was not easy. For the first meeting, we met in Dubrovnik in Croatia. I must say it was more a meeting of divisions rather than a meeting of identifying common ground. We got stuck in history. The second day, we started to reflect on making progress for a better future,” she recalls.

At the group’s latest gathering in Saranda, Albania in late September, more than 70 prominent women politicians and civil society activists from across the region came together for an international conference on increasing the role of women in politics, peace and security. It was organized, mediated and moderated by UN Women with support from the Swedish and Albanian Governments. A joint declaration was adopted by women MPs from Kosovo and Serbia. Participants agreed to intensify networking and cooperation between women in politics and civil society across the western Balkans, and spur young women’s political participation in particular.

Despite tense discussions during the day, by the evening, participants’ differences seemed to disolve. At an ice-breaker social event, which was also symbolic of the efforts to intensify working together, the women danced hand-in-hand to traditional Balkan folk music, eating and laughing together.

“Taking into consideration the unresolved ethno-nationalist conflicts in the Balkan region and that the region is also struggling on its path to fully integrate with the European Union, it is obvious that the efforts of the Women’s Lobby are crucial and much-needed to create a sustainable peace,” says Ingibjorg Gisladottir, UN Women Regional Director for Europe and Central Asia.

At their regional conferences, these high-level women discuss and share their views on women’s empowerment. Their aim is to see their recommendations become reality back home.

And the results are evident. Ms. Tahiri says all countries in the region now have quotas for women’s political representation in Parliament.

“Women are half of the capacity of each society and their participation sophisticates policymaking,” says conference participant Teuta Arifi, Mayor of the ethnically diverse city of Tetova, (The FYR) Macedonia.

The former MP and Deputy Prime Minister was the first ethnic Albanian woman elected to the Macedonian Parliament in 2002. “But I faced a very hard campaign from my opponents, which was very personal. And I think this happened because I was a woman.”

Through a series of inter-ethnic dialogues between women politicians from Kosovo and Serbia, the RWLSEE, in close partnership with UN Women, also supports the implementation of the Brussels Agreement. Signed in April 2013 between Serbia and Kosovo, the Agreement is the first formal step to normalize relations between the two countries 14 years after the end of the war. Ms. Tahiri was among its key negotiators.

To ensure women’s role in implementing the Brussels Agreement, UN Women supports the Lobby through a project funded by the Ministry for Foreign Affairs of Sweden. It seeks to break through barriers of mistrust by engaging women from Kosovo and Serbia in inclusive and sustainable conflict settlement to build long-term stability, peace and security.