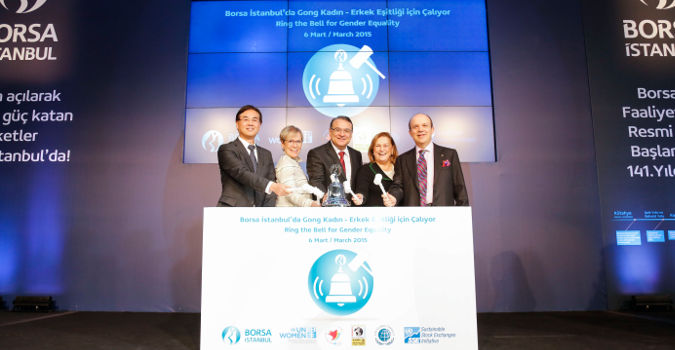 UN Women envisions a Europe and Central Asia free of gender discrimination, where women and girls are empowered to lead the changes that unlock progress for all. Partnerships are the essential foundation for all that we do towards this goal.  Partnering with governments, civil society, the private sector and committed individuals, brings together expertise and resources, both from within and beyond our region, thereby creating a powerful force for change.

UN Women’s work relies entirely on voluntary financial contributions that sustain and enrich programmes and initiatives throughout our region. Member States contribute the overwhelming majority of UN Women’s US $500 million annual budget. Thanks to the generous support of the 143 governments , UN Women can fund and sustain regional and country programmes and projects that support gender equality and women’s empowerment in Europe and Central Asia.

Acting as central advocates and champions for gender equality within governments, national women’s mechanisms across the region are vital UN Women partners.  These mechanisms drive the integration of gender equality and women’s empowerment in national policies and programmes, as well as in ensuring compliance with international agreements on women’s rights, including key gender-related conventions such as the Beijing Platform for Action, the Convention on the Elimination of All Forms of Discrimination against Women (CEDAW), and the Istanbul Convention on Preventing and Combating Violence against Women and Domestic Violence, among others. For reference, see the latest Directory of National Mechanisms for Gender Equality.

The Women’s Empowerment Principles offer practical guidance to businesses and the private sector at large on how to empower women in the workplace, marketplace and community. Developed through a partnership between UN Women and the United Nations Global Compact, the principles are designed to support companies as they review policies and practices—or establish new ones—to realize women’s empowerment in all possible levels and sectors.

Civil society organizations are vital advocates for gender equality and women’s empowerment and as such, are strategic partners for UN Women, both globally and regionally, as well as at the national and local levels. By advocating on core issues of concern for women and girls, as well as holding international and national leaders accountable for their commitments to gender equality and women’s rights, civil society groups make significant contributions to the global policy framework. Their valuable insights and experience assist us in implementing UN Women programmes, projects and initiatives that are tailored to the needs and concerns of different groups of women and girls across the region.  UN Women recently established its Regional Civil Society Advisory Group  for Europe and Central Asia, which will serve as an important forum for engagement.

Call for Proposals: Support to improved performance and increased capacity among shelters for victims of gender-based violence
In the words of Elena Biceva: “By taking care of ourselves, we can help even more”
In the words of Larysa Denysenko, a Ukrainian legal expert: “Sexual violence is a tactic of intimidation, torture and humiliation”
From Where I Stand: “We need women’s voices for a sustainable marine life and fisheries sector.”
Women with disabilities from Montenegro empowered to recognize and report violence against women
END_OF_DOCUMENT_TOKEN_TO_BE_REPLACED