Private sector initiatives support the 16 Days of Activism against Gender-Based Violence in Kosovo, reaching 1.5 million individuals in the first week 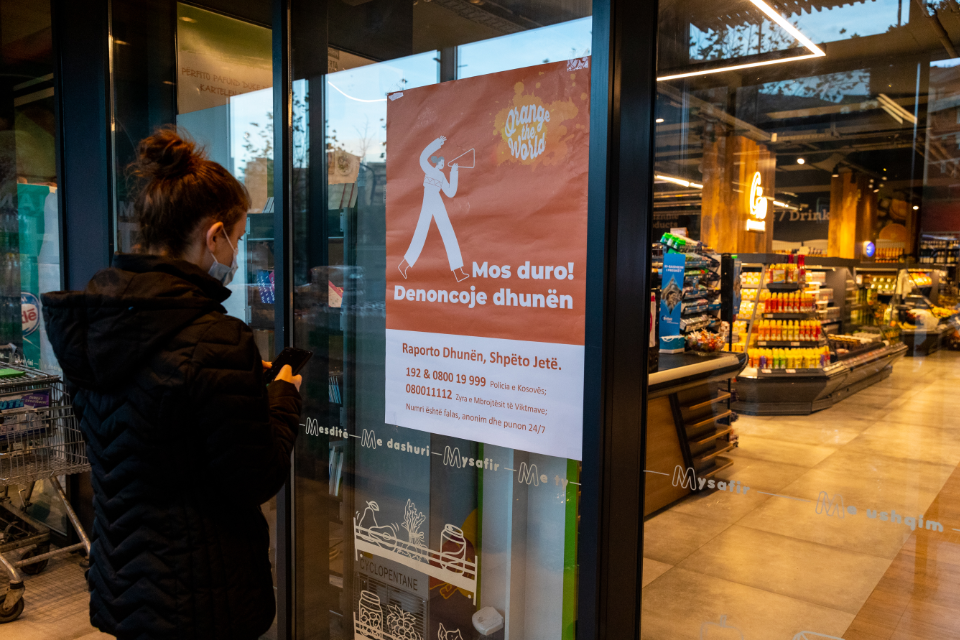 Learn where you can Report Violence in the Meridian Express Supermarkets. Photo: UN Women Kosovo

Gender-based violence has detrimental effects on everyone and cannot be considered a private matter. To highlight this, a number of private sector companies and corporations in Kosovo[1] joined this year’s 16 Days of Activism against Gender-Based Violence campaign.

The importance of the role of private sector in responding to gender-based violence is more evident than ever, and it makes good business sense too. This year for the first time, UN Women invited private sector representatives in Kosovo to become part of the global campaign, with around 20 companies and corporations joining. In the first week, 1.5 million individuals were reached across Kosovo.

By using their brands and reach, the companies challenged the traditional gender norms and stereotypes that fuel gender-based violence and harassment in the first place.

As part of the global campaign against gender-based violence, the participating companies disseminated information on gender-based violence through their own communication channels. Special emphasis was given to providing the hotline phone numbers for reporting cases of gender-based or domestic violence. In this regard, companies used their social media accounts to spread messages against gender-based violence, placing messages on their products, creating “orange corners”, disseminating brochures, and displaying posters in their premises. In addition, they “oranged” their premises, broadcast advertisements on their television channels, played campaign messaging on led screens in the main squares of different cities in Kosovo, published articles on different portals, and organized events with the intention of raising awareness, mobilizing the community and preventing gender-based violence.

Vlora Nushi, Head of UN Women in Kosovo, highlighted the role of the private sector in preventing gender-based violence and raising awareness in the community by saying: “Businesses should make use of their influence to encourage their partners, consumers and community leaders to raise awareness, mobilize collective action, shift traditional attitudes and norms, and change laws and administrative practices to prevent gender-based violence and provide proper compensation and support to survivors when violations do happen.”

She said that although gender-based violence is a quite a challenging issue to tackle, businesses have the capacity to shift norms in the community, and a lot to gain from such efforts, including improved overall performance and productivity.

Related News
09/12/2021
Press release: International conference focuses on ensuring women's protection and protagonism in politics and peacebuilding
25/11/2021
Believe Survivors. Act Now. Sara Gashi’s Story, Kosovo
08/09/2021
Roma, Ashkali and Egyptian communities in Kosovo tackle a centuries-old harmful phenomenon
27/07/2021
UN Women teams up with the Embassy of Italy to Kosovo and the Ministry of Justice to address the needs of survivors of domestic and gender-based violence
20/04/2021
Take Five: “It is imperative that all laws are harmonized with the obligations in the Istanbul Convention”
END_OF_DOCUMENT_TOKEN_TO_BE_REPLACED