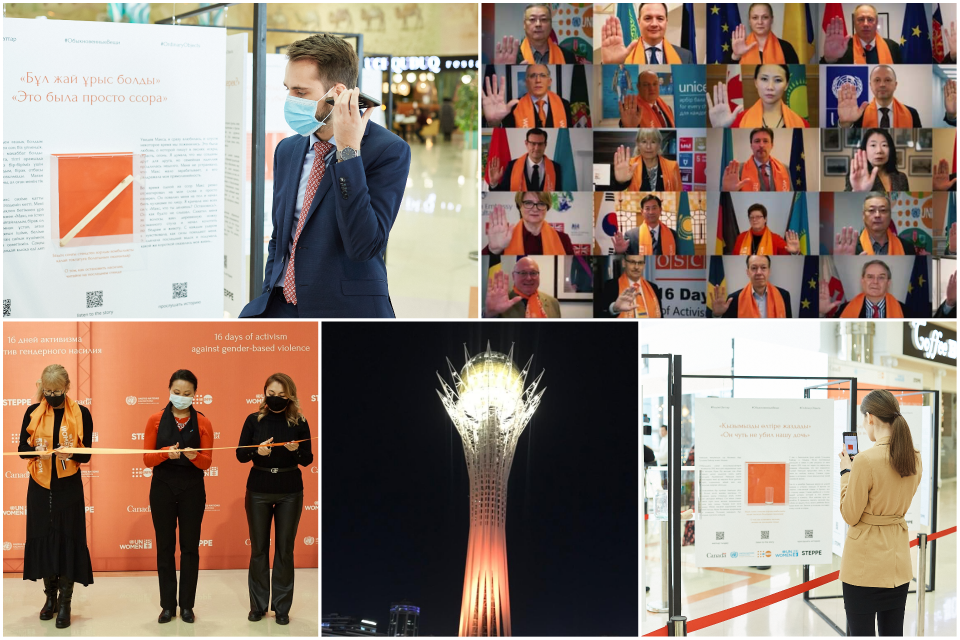 2 December 2021, Nur-Sultan – UN Women in Kazakhstan released a video message from the heads of diplomatic missions and international organizations, calling on the public to take a stand against gender-based violence. Today; during the 16 days; and every day.

In addition, 35 diplomatic missions and organizations operating in Kazakhstan signed a joint statement backing the campaign. It affirms their commitment to end violence against women and girls, commends women activists, and urges the Government of Kazakhstan to further introduce legislation to ensure full and comprehensive protection for women and girls.

“In recent years, much has been achieved to prevent and reduce violence against women and girls. The challenge now is to expand global efforts and make a difference in more lives,” said Sima Bahous, United Nations Under-Secretary-General and Executive Director of UN Women. “We must ensure that essential services are available and accessible to women of all ages. We need to support environments, online and offline, in which women can participate safely in decision-making.”

Maria Dotsenko, UN Women Representative in Kazakhstan emphasized that, according to the Attorney General’s Legal Statistics Committee, in the first 10 months of 2021, at least 1,644 girls and women in Kazakhstan were exposed to various forms of gender-based violence, 48 women were killed and 300 were injured as a result of domestic violence. During the pandemic, the number of domestic homicides in the country increased by a third, and cases of domestic violence reported to the police increased by a quarter.

“These numbers are very alarming,” said Dotsenko. “We call for an end to violence against girls and women, and to support the initiative to criminalize domestic violence, as well as other comprehensive measures to eliminate these offenses.”

On the first day of the 16 Days of Activism campaign, an interactive audiovisual exhibition entitled “Ordinary Objects” opened in Nur-Sultan. It presents 16 seemingly ordinary things: a glass, a book, a shoe, etc., but behind each item is the real story of a person who suffered from domestic violence. The exhibition is organized by the UN Resident Coordinator’s Office, the Embassy of Canada in Kazakhstan, Kyrgyz Republic and Tajikistan, UN Women and UNFPA.

“People experience a huge range of emotions when they read stories like these,” said exhibition visitor Vladislav Saiko.

“After reading the first three stories, I was unable to continue”, shared another visitor, Dana Buralkiyeva.

The exhibition was one of the multitude of events organized globally and in Kazakhstan to call for joint action to end gender-based violence. The global 16 Days of Activism against Gender-based Violence campaign ends on 10 December, Human Rights Day.

Kazakhstan has also joined the global Action Coalition on Gender-Based Violence, with the country’s commitments in this area announced by the President during the Generation Equality Forum on 1 July 2021.

#ORANGETHEWORLD is the official slogan and hashtag of the 16 Days campaign, which runs globally from 25 November to 10 December. During this time, many of the world’s landmarks are lit in orange. The city of Nur-Sultan has also joined the global campaign, lighting the capital's landmark Baiterek and other city sights in orange throughout the 16 days.

Related News
12/11/2021
Call for Proposals to support the establishment of a regional funding mechanism for the Central Asia women’s movement.
27/11/2020
Press Release: International online gathering in Kazakhstan spotlights prevention of violence against women and women’s access to justice
01/06/2020
Women confront pandemic-related violence against women across Europe and Central Asia
19/05/2020
Social media broadcast draws attention to domestic violence amid COVID-19
09/04/2020
From where I stand: “The fact that domestic violence is not a criminal offence in Kazakhstan is hurting women during COVID-19 crisis”
END_OF_DOCUMENT_TOKEN_TO_BE_REPLACED