In the words of Esma Bekkar: “There should be stronger awareness about not just physical but all forms of violence.” 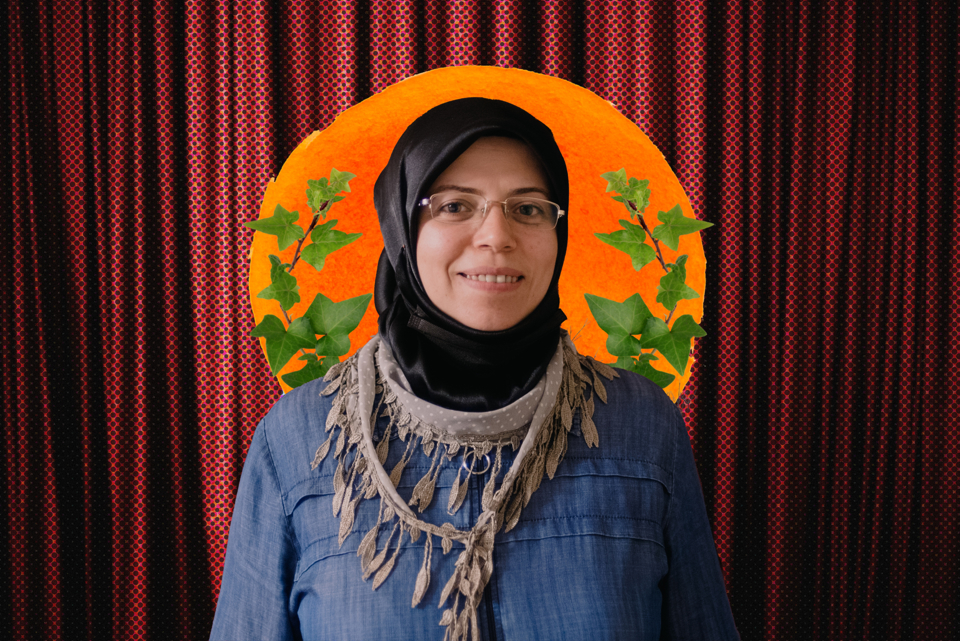 Esma Bekkar participated at the “Creating a Violence-free World” workshop as part of the 16 Days of Activism campaign. Photo credit: İlkin Eskipehlivan

Esma Bekkar, from Syria, has been living in Gaziantep province, Turkey since she and her family escaped from the war in 2017. As part of the 16 Days of Activism campaign, she attended the “Creating a Violence-free World” workshop, implemented by the UN Women Refugee Response Programme in partnership with the Association for Solidarity with Asylum Seekers and Migrants’ (SGDD-ASAM). This effort is funded by the governments of Japan and Norway. Bekkar talks about the prevalence of child marriage in the Syrian refugee community and how she raises awareness about the harmful consequences of this practice in her community. She invites women in Syrian and Turkish communities to keep a close eye on what is going on in their neighbourhoods and support local authorities to take solid steps to stop child marriages.

My name is Esma. I am 40 years old and have been married for 21 years. I participated in the workshop to gain information and inspiration about how violence can be spotted and ended. Child marriage is a cause of concern in our community, yet many do not regard child marriage as a violation of girls’ human rights. If we fail to create awareness around child marriages, we cannot prevent its spread within the community. When I first came to Turkey five years ago, I was a very shy person. Suffering from war anxieties, I used to stutter while talking and lose my way when I went out alone, but now I'm stronger thanks to the counselling support that I received from SGDD-ASAM. War is a devastating experience but moving to Turkey has given us the opportunity to be ourselves and be part of the wider society. As I integrated into the social life in Turkey, child marriages within my community have become more visible to me. If I had not left Syria, maybe I could not really see clearly that it is a harmful practice for girls’ health, education and integrity, let alone their future development. For this reason, I decided to play my role in ending child marriages in my community. We need to look at how we can change our perspective and that of others to create a difference.

In my community, I play an active role in preventing early marriages by explaining why this practice is harmful and what happens if a girl child becomes pregnant. I talk to families who want to get their daughters married at a young age, and I help to change their minds. There is no prohibition or obstacle in this regard in Syria, so it is very normal and common for girls to marry at an early age, but there is a legal sanction in Turkey. As Syrian women, we carried out awareness activities on the consequences of violating the laws in Turkey. This contributed to a significant decrease in such marriages.

Syrian women are often exposed to psychological violence, as men do not allow them to go out as they want to control women at all times. I think psychological violence is more prevalent in Syrian families than physical violence and child marriage is a consequence of this violence. When we lived in Syria, it was usual enough for a man to work and women to stay home and only socialise with their close relatives and neighbours. Here, refugee women have become more active members of the society thanks to the support of centres. There is no such thing as impossible anymore as long as we know how to advocate for our rights.”

Related News
09/12/2021
In the words of Intisar Cilliden: “No woman deserves violence for making her own choices”
09/12/2021
In the words of Mürfet Cacul: “I want people to think of Syrian women as open to change, curious to learn, and lovers of communication”
28/12/2021
Non-Violence Summit and Creating a Violence-free World exhibition held give visibility to gender-based violence in Gaziantep, Turkey
15/12/2021
European Union and UN Women join forces to provide financial and technical support to 22 civil society organizations
09/12/2021
In the words of Melek El Ahmed: “Violence begins when we do not give our daughters the same opportunities that we give our sons.”
END_OF_DOCUMENT_TOKEN_TO_BE_REPLACED