Only 1 in 10 women survivors of violence seek help from police, globally. But even those who do often withdraw from the justice process due to poor responses from police or other judicial actors. Women’s access to justice starts with believing survivors and taking action, every day. Through this special editorial series for the 16 Days of Activism, UN Women showcases the voices of survivors and programmes that transform lives and communities.

“Until I reunite with my children, I won’t give up. They are everything to me,” says Sara Gashi[1], a domestic violence survivor from Kosovo*. “My parents forced me to marry when I was 21 years old. I got married on 8 March, International Women’s Day. My husband, as well as his father and stepmother, physically abused and emotionally tormented me for years. Until one day, after enduring psychological and physical violence for so long, I decided to go to the police.”

Unfortunately, the police officers did not believe Gashi’s story. They tried to convince her that the abuse was not an excuse to leave. Finally, they took her to the Prishtina Domestic Violence Shelter, where she finally felt supported and safe. 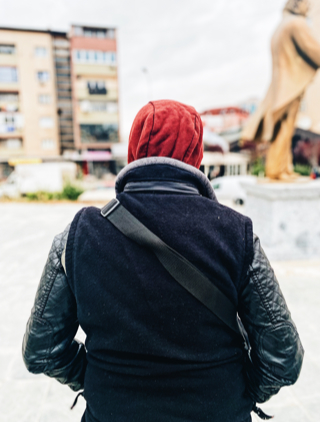 “The shelter staff provided me with a safe space and took care of me. After I had been there for three months, I realized I was pregnant with my first baby. That’s when I went back home, hoping things had changed,” says Gashi, now a mother of three.

After another eight years of enduring domestic violence, she went back to the same shelter, intent on ending the cycle of abuse. “The shelter informed me about my legal rights, and I filed for divorce. Because I had no income, I was left at the mercy of a free lawyer provided by the court, who showed up only to my first hearing and missed the other three.”

After she had exceeded the maximum one-year stay at the shelter, Gashi no longer had a home, so the court granted custody of her children to her husband and his family. She was homeless for five years, sometimes spending nights at her friends’ houses. Her parents had previously obliged her to waive her inheritance rights so the family property could go to her brother, leaving her with nothing.

She could only see her children twice a month for an hour, and most of the time, her ex-husband didn’t bring all three kids to visit.

A judge refused her request for alimony because her husband had no property in his own name and no income besides social assistance. Her parents and siblings haven’t spoken to her since she left her husband’s home. They also never offered her shelter.

Under UN Women’s regional programme on ending violence against women funded by the European Union, the Kosovo Law Institute (KLI) will be launching  an online platform providing free legal aid advice for women and girls with a special focus on domestic violence survivors and women from disadvantaged groups.

How you can take action

This platform will bring hope and support to survivors like Gashi, who need guidance on how to claim their rights and access justice by offering free advice on any legal topic of concern.

Gashi’s case is not an exception. Many survivors face similar treatment from the justice system, discouraging them from claiming their rights. Having a legal aid platform will not only make survivors aware of their rights but guide them on how to hold institutions accountable for their actions.

The free legal aid platform will be launched on 29 November during the 16 Days of Activism against Gender-Based Violence, alongside a series of awareness-raising activities with local civil society organizations. It will be available in Albanian and Serbian languages.

Beyond raising awareness, KLI considers increased accountability for institutions essential to avoid violations of women’s rights due to discriminatory mentalities or social norms.

“Judges in Kosovo must understand that women and men are equal under the Constitution and applicable laws, and this must be reflected in the application of the law in property matters. Practice shows that male and female judges, when enforcing laws, favour men to the detriment of women and in violation of women’s rights,” says Arrita Rezniqi, senior researcher and trainer at KLI.

As part of the EVAW regional programme, UN Women partner the Kosovo Gender Studies Center (KGSC) is organizing three trainings for 75 judges, prosecutors, lawyers and legal aid providers. They will also prepare an informative guidebook to review existing international, regional and national tools for the judiciary on violence against women and girls.

UN Women research with domestic violence survivors, entitled Law Enforcement and the Challenges that Domestic Violence Survivors Face During and After Legal Proceedings in Kosovo, confirms that women in general do not have a strong belief in the court system.

“According to the experiences of the survivors in shelters, court proceedings are lengthy and often stressful and one-sided,” says Economics Professor Fëllënzë Pula, who led the research.

KGSC is also in the process of monitoring cases of domestic violence handled by the court to review their compliance with international standards. The reporting will be thorough and identify gaps hindering the prevention of violence against women, protection of survivors, prosecution of perpetrators and the need for integrated policies.

[1] Survivor’s name has been changed to protect her identity.
* For the European Union, this designation is without prejudice to positions on status, and is in line with UNSCR 1244/1999 and the ICJ Opinion on the Kosovo declaration of independence. For UN Women, references to Kosovo shall be understood to be in the context of UN Security Council resolution 1244 (1999).

Related News
13/04/2022
In the words of Iliriana Jaka Gashi: “Bringing public and private institutions together to work on the economic reintegration of survivors of violence is indispensable”
20/04/2021
Take Five: “It is imperative that all laws are harmonized with the obligations in the Istanbul Convention”
12/04/2021
Call for Proposals for civil society organizations in Kosovo to submit project proposals on strengthening capacities of shelters to support survivors of violence, improving capacities of professional staff engaged in service provision, and development of
08/03/2021
Women leaders in the Western Balkans and Turkey confront violence against women amid the pandemic
07/12/2020
Women with disabilities at higher risk of violence in private and public realms
END_OF_DOCUMENT_TOKEN_TO_BE_REPLACED