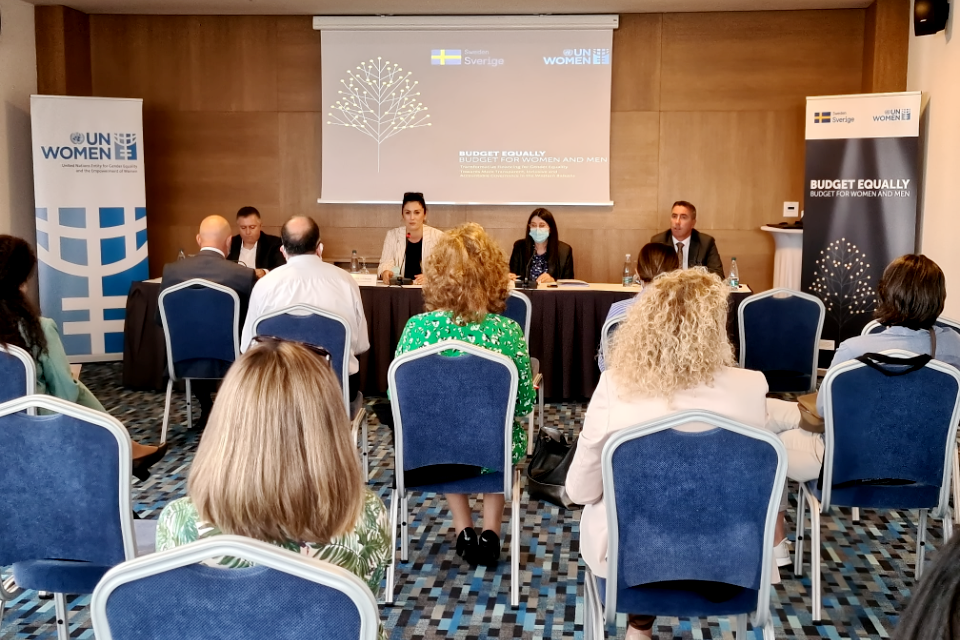 The “Local Needs Assessment Related to Gender Equality, Gender Responsive Budgeting, and Addressing Needs during the Pandemic” report was launched at a high-level event in Pristina on 3 September. The assessment found that while officials in Kosovo[1]  are to some extent familiar with applying a gender lens to their budgeting process, or gender-responsive budgeting (GRB), doing so was still largely driven by women officials.

The Assessment found that more women (84 per cent) than men (59 per cent) participated in workshops, training, and study visits conducted by GRB-related programmers. Meanwhile, significantly more men (76 per cent) than women (52 per cent) have had the opportunity to prepare or contribute towards preparing budgets. Furthermore, few local-level decision-makers and assembly members have a good knowledge of what comprises gender-responsive budgeting. These results point to gender issues being perceived as “women's issues” and that such trainings and workshops reach women officials and representatives more than men.

“GRB focuses on issues that are often overlooked in the analysis and decision-making of the conventional budget,” said Vlora Tuzi Nushi, UN Women Head of Office in Kosovo. “These issues include the role of unpaid work in economic and social outcomes, particularly the disproportionate responsibility that women bear for unpaid work; as well as the distribution of resources within and among families; and the extent to which women and men participate in budget decision-making,” she said.

Speaking at the launch event, Edi Gusia, Chief Executive Officer of the Agency for Gender Equality highlighted that, “the Government of Kosovo is supporting the implementation of gender-responsive budgeting, which will be used to tackle problems, inequalities and to achieve targeted interventions in areas where we can make changes.”

“Gender-responsive budgeting has started in our municipality long ago,” said the mayor of Gjakova Municipality, Ardian Gjini, at the event. “However, in municipalities there are short-term challenges and long-term visions, which are not always fully compatible,” he said, emphasizing the challenges faced by officials in municipalities like the one he leads.

Meanwhile, Qëndron Kastrati, Kamenica’s Mayor, highlighted that it is extremely important for local level representatives and decision-makers to understand the gender implications and differences when they exist when proposing or voting on policies and when preparing budgets.

“Factors for successfully implementing GRB are political will and leadership, also the commitment of public administrative institutions, and improving the technical capacity of civil servants, as well as the involvement of civil society, and the sharing of gender data, and involvement in discussions”, he declared.

During the event, participants had the opportunity to discuss the importance of GRB, future planning, and the significance of ensuring the gender-equitable distribution of resources and contributing to equal opportunities for all. Implementing commitments towards gender equality requires intentional measures to incorporate a gender perspective in planning and budgeting frameworks and concrete investment in addressing gender gaps.

To improve the situation, the assessment will serve as a basis for designing a training module for local administration on gender mainstreaming and GRB, and its application in emergency situations.

The launch event brought together mayors, gender equality officers, budget and finance directors, and other relevant actors. It concluded with an expression of the participants’ commitment to advancing the integration of gender equality at all stages of national and local policymaking and budgeting processes.

The assessment was conducted under the regional project, Transforming Financing for Gender Equality towards more Transparent, Inclusive and Accountable Governance in the Western Balkans. This effort is supported by the Swedish International Development Cooperation Agency (SIDA). The Assessment was conducted by UN Women with the assistance of IDRA Research and Consulting, Kosovo.