UN Women is launching a three-year project to advance women’s leadership and participation in political decision-making as well as the private sector in Turkey. The project is possible with financial support from the Government of Sweden. 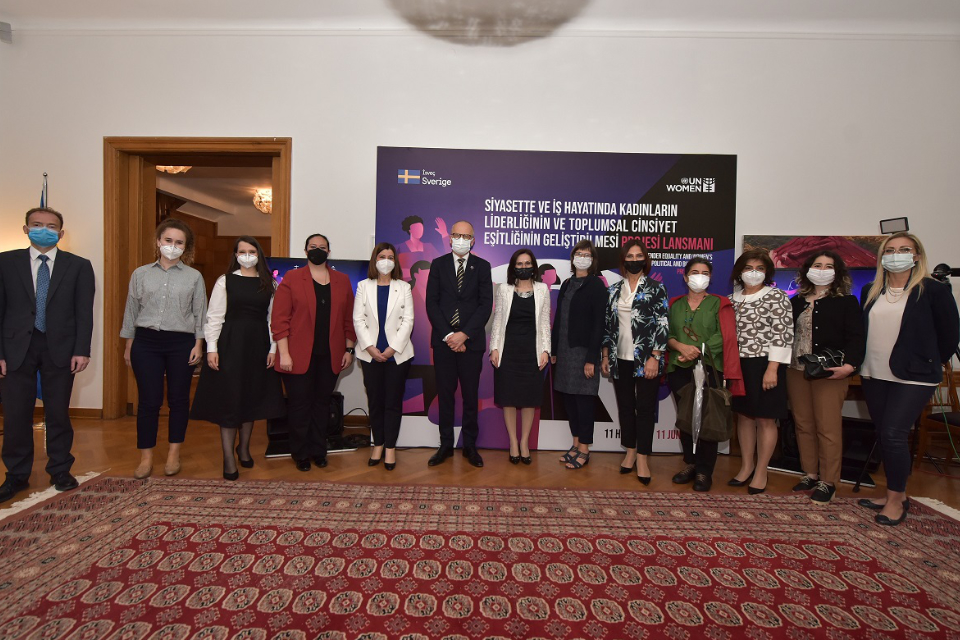 Key stakeholders of the project came together for the launch of the event. Photo: Ender Baykuş / UN Women

The Advancing Gender Equality and Women’s Leadership in Political and Business Life project kicked off in May 2021. Building on UN Women’s previous programmes and strong partnerships, this initiative seeks to further support the efforts of the Government, civil society and the private sector in increasing women’s leadership and participation in decision-making in politics and business. The Government of Sweden, through the Swedish International Development Cooperation Agency (SIDA), has contributed US$ three million towards the project.

The project was officially launched by UN Women and the Embassy of Sweden on 11 June with a joint event. Representatives from UN Women, the Embassy of Sweden, as well as project stakeholders from the local governments, public and private sectors and civil society organizations participated in the event.

Speaking at the event, Asya Varbanova, UN Women Turkey Country director said: “Despite incremental progress in the past decades, women are still underrepresented in political and public life and decision-making in most countries around the world, including Turkey. Expediting progress is crucial to achieving the Sustainable Development Goals by 2030: at the current pace of change, gender parity will not be reached in Parliaments before 2063. Through this project, we will intensify our efforts together with our national partners towards advancing women’s full, equal and effective participation and leadership in political, public and economic life.”

Also at the event, Staffan Herrström, Ambassador of Sweden, stated: “We support UN Women and this project in a true long term partnership because we see that around this action, the key stakeholders with their different mandates are gathered. As Sweden’s ambassador to Turkey I will seek dialogue with a broad range of actors, including the women’s movement which always plays a crucial role in all countries including my own. And I will always look for opportunities to raise and promote gender equality in constructive ways – based on the feminist foreign policy of our Government. As a HeforShe ambassador, I particularly invite and encourage men to be active supporters of gender equality.”

Key stakeholders of the project include the Committee on the Equality of Opportunity for Women and Men of the Grand National Assembly of Turkey, women aspirants, candidates and politicians and political advocates at the local level, representatives from non-government organizations, media organizations, private sector organizations, and gender equality activists.

Through the project, UN Women will work with national partners to strengthen legislative frameworks for increasing women’s leadership in political decision-making.

The project will also establish a cadre of interested, diverse and capable women to run for political office at the local level, increase solidarity and gender equality awareness among women from different political affiliations. Research on violence against women in politics and analysis on election data will also be conducted.

UN Women will support selected local governments to implement new tools and models to strengthen the provision of gender-sensitive services that address the needs and priorities of women.

UN Women will also strengthen and expand work with the private sector and advance women’s leadership in business life. UN Women will work with companies committed to gender equality to sign up to and implement the Women’s Empowerment Principles – a global framework of seven principles for businesses to advance women’s empowerment in the workplace, marketplace and community.

To challenge gender stereotypes and transform social and corporate norms, the project will have a specific focus on the engagement of men as allies for gender equality through UN Women’s HeForShe movement.

Under the project, capacity building activities will be organized for current and future media professionals on gender-sensitive journalism.

Related News
15/12/2022
Turkish Parliamentarians set sights on new policies and a road map for ending violence against women in politics
28/03/2022
In the Words of Kadem Doğan: “I question inequalities and also empower myself to challenge them”
01/03/2022
Call for Applications: Small Grants for Women’s Civil Society Organizations (CSO) and Women-Led CSOs under the ‘Strengthening civil society capacities and multi-stakeholder partnerships to advance women’s rights and gender equality in Turkey’ Project
15/12/2021
European Union and UN Women join forces to provide financial and technical support to 22 civil society organizations
26/07/2021
Call for Proposals: Strengthening political leadership and skills of women political aspirants at local level to advance gender equality and women’s leadership in political life in Turkey
END_OF_DOCUMENT_TOKEN_TO_BE_REPLACED