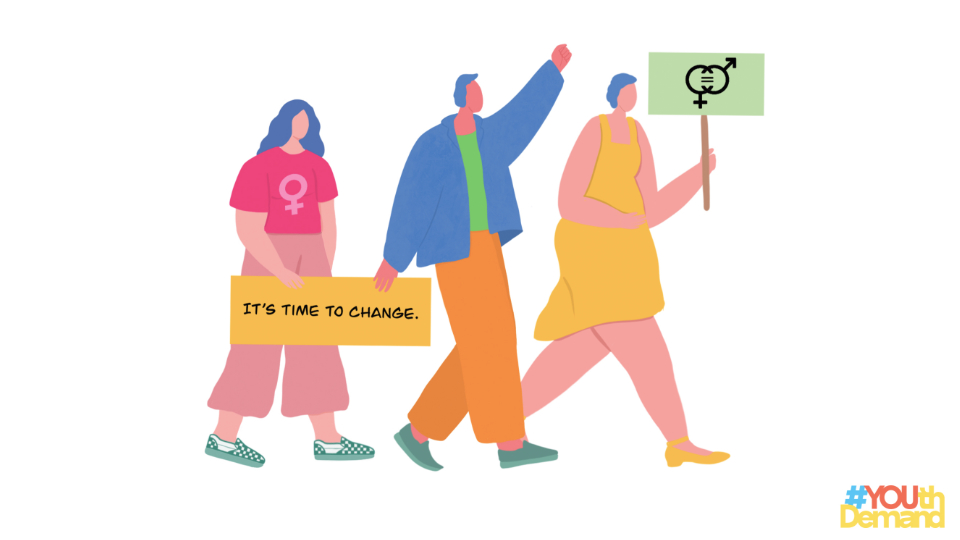 On the occasion of International Women’s Day, UN Women is launching #YOUthdemand, a youth-led social media campaign to galvanize action among the youth across the Europe and Central Asia region and beyond to make a strong call for the achievement of gender equality. Starting from 8 March, the campaign will encourage young people to take action and demand change using the hashtag #YOUthdemand.

The aim is to unite and amplify young change-makers' voices around the region and across the globe and put forward their ideas with the aim of influencing decision-makers. Co-created and led by the youth activists in cooperation with UN Women, the campaign will gather activists, influencers and opinion leaders across the region under a joint call to action: demand, change the world.

Running on UN Women ECA’s Russian and English Instagram accounts between 8 and 21 March, through its face filter and hashtag #YOUthdemand, the campaign will collect the youth's voices across the region and globe on what they think needs to be done to achieve gender equality. The collected data will be presented at the Generation Equality Forum in Mexico (29-31 March 2021), aiming to make the voices of young people heard by the decision-makers attending the Forum.

Led by two National Gender Youth Activists, Asel Kubanychbekova (24) from Kyrgyzstan and Dario Korolija (21) from North Macedonia, the campaign also provides a free space for activists to co-create innovative ideas to attract and mobilize the youth across the region.

“Co-leading #YOUthdemand Campaign is an honor and a significant commitment for me as a young feminist from Central Asia to mobilize the youth towards building a sustainable world. Creating this campaign with other young activists helps me improve the work I am doing in my country to empower girls and women economically,” says Asel Kubanychbekova.

“I am proud of being part of this groundbreaking momentum. With #YOUthDemand, we are probing beyond our close feminist circles and reaching out to the youth who wanted to participate in the decision-making processes but did not have the chance. We look forward to playing a changing role at the Generation Equality Forum by utilizing our findings. This is the beginning of a new era,” says Dario Korolija.

The campaign kicks off UN Women’s youth engagement roadmap in Europe and Central Asia under the Generation Equality agenda. The Regional Office aims to increase and expand youth activists' role as leaders and change agents in their communities and strengthen their knowledge and skills to create innovative actions for advocacy and community mobilization in the context of COVID-19.

UN Women Europe and Central Asia Regional Director Alia El-Yassir states, “We firmly believe in and recognize that the voice of today’s youth holds a pivotal role in making change happen. This campaign will give young leaders across the region a podium to voice their vision for the future. This new generation of conscientious change-makers can show us new ways to make positive change towards gender equality happen in their lifetime. It is time for the youth to take charge in shaping the future they want.”