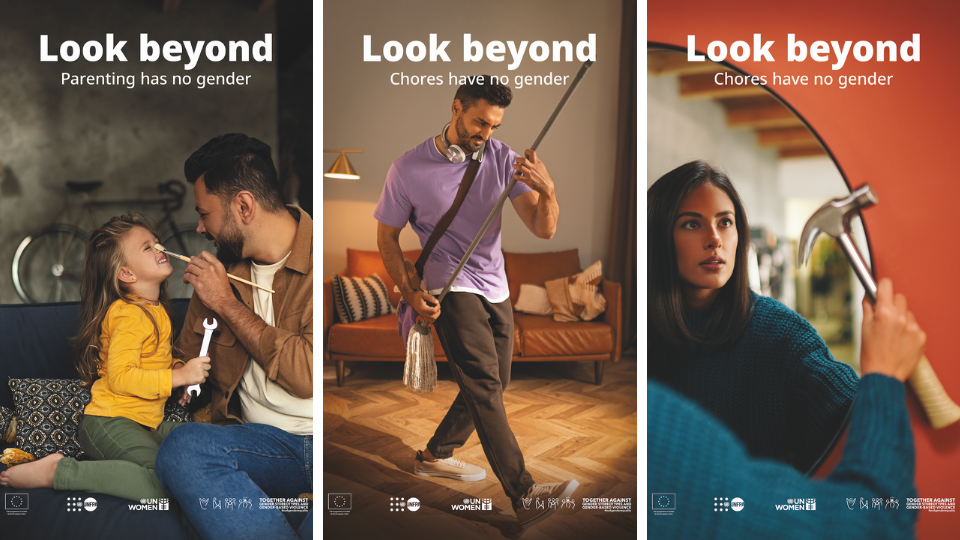 Of all the extraordinary challenges and transformations experienced worldwide as a result of the COVID-19 pandemic, perhaps the most disruptive – outside of the frontline health arena – have occurred in the field of work. Many have found themselves unemployed or with drastically reduced hours, while large swaths of the office-going workforce have been shifted to working from home. The closing of schools and other childcare services has meanwhile dramatically increased the burden of unpaid care work on families – especially women.

A new campaign called ‘Look Beyond’ seeks to make sure that this burden is equally shared by both men and women, and ultimately to encourage all of society to look beyond traditional masculine and feminine roles to a world where household chores and childcare have no gender.

Implemented jointly by UN Women and UNFPA, the campaign is taking place in the Eastern Partnership[1] within the framework of a European Union-funded regional programme. It was designed around the belief that the unprecedented situation of a world-altering pandemic can also provide us with a unique opportunity: to address the unbalanced power dynamics, and the preconceptions about what women and men can and should do, that are at the root of the unequal distribution of unpaid care work.

Even before the pandemic, women around the world did three times as much unpaid care work as men – work that is essential for the survival and prosperity of communities but is often invisible and taken for granted. According to a UN Women report, before the pandemic, 16.4 billion hours were spent globally on unpaid care work every day. That’s the equivalent of 2 billion people working full eight-hour days without pay.

Research in 18 countries done by Ipsos for UN Women shows that after the pandemic began, women started spending an additional 5.2 hours per week on childcare on average, for a total of approximately 31 hours. By comparison, men only reported an increase of 3.5 hours, to a total of approximately 24 hours per week spent on childcare. Moreover, according to a Rapid Gender Assessment survey led by UN Women in Europe and Central Asia, women now carry out 3.2 more activities in the household domestic and care realm, compared to only 2.3 more activities for men.

A shift in how we perceive fatherhood could form the cornerstone of much-needed change. According to the Guardian, the pandemic period has seen a surge in the number of hours men are spending with their children in the United Kingdom. This pattern is not unique to Western Europe. In Turkey, a nationwide survey supported by the United Nations Development Programme showed that the time men spend on childcare has also increased significantly. Men all around the world stepping up to fill a larger caretaking role for their children would be a boon to overburdened mothers and a big leap towards gender equality.

However, this alone does not create equality when it comes to unpaid care work. Not all couples or families have children. And for those that do, the number of hours spent on childcare does not reflect the full extent of the time required to fulfil the care needs of a family. Chores such as cooking, cleaning and doing laundry are still relegated mostly to women in societies around the world, and these demands have also significantly increased during the pandemic. If long-lasting change is to be achieved, men need to pick up their share of these tasks as well.

Men doing more unpaid care work means that women will be under much less stress, will have more time to dedicate to their professional development and will be empowered to transcend outdated gender roles in other ways. Challenging gender stereotypes within the family and encouraging men to understand and define their masculinity in different ways has also been shown to decrease the number of incidents of domestic violence, allowing women to feel safer in their own homes.

These kinds of profound changes are what the ‘Look Beyond’ campaign aims to help bring about, both through serious policy initiatives and playful incentives such as an Instagram filter mini-game that randomly assigns household chores to couples using it together.

The year 2020 brought many uncertainties. But what is certain is that our world will never be the same. With the right messages and policies, we can ensure that this new world will be a much better one, unburdened by gender stereotypes. All we have to do is look beyond.

Related News
14/10/2022
Youth activists and advocate Kerem Bürsin celebrate HeForShe’s 8th anniversary in Türkiye
15/09/2022
In the Words of Ender Baykuş: “I believe in gender equality and think everyone should be part of the change”
08/07/2022
The women who tame the bees: The buzz on developing a business in a traditionally male area
06/07/2022
UN Women works towards gender-responsive municipalities through engaging men and boys in Türkiye
02/06/2022
I am Generation Equality: Assemgul Temirkhanova, Kazakhstani golden grappling champion
END_OF_DOCUMENT_TOKEN_TO_BE_REPLACED