In the words of Zeynep Denli: “Women support women. We understand and empower each other”

Zeynep Denli, 30, works as a social worker at the SADA Women's Empowerment and Solidarity Center run by UN Women in Gaziantep, a city in southern Turkey along the border with Syria. Financed by the European Union and the Government of Japan, the Center responds to the diverse needs of Turkish and Syrian women to economically and socially empower them and increase their resilience. As a social worker, Denli plays an essential role in responding to women’s needs under the new circumstances brought by COVID-19. 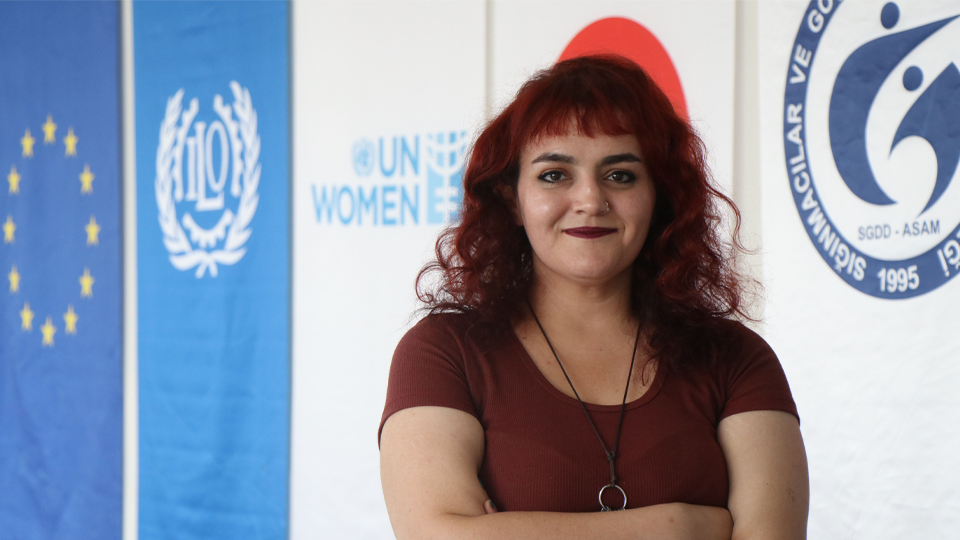 Zeynep Denli, 30, is working as a social worker at the SADA Women's Empowerment and Solidarity Center. Photo: Tayfun Yılmaz/UN Women

I have been working for almost nine years to help eliminate inequalities and support women's empowerment. Since September 2019, I have been working as a social worker at the SADA Center which is run by UN Women in cooperation with Gaziantep Metropolitan Municipality and the Association for Solidarity with Asylum Seekers and Migrants. I have provided psychosocial support to many Turkish and Syrian women and helped them recognize the signs of violence they might be exposed to and how to fight against it.

I believe spaces have a gender, and the gender of SADA is woman. The childcare room, breastfeeding room, and other features reveal the gender of the Center the moment you step in. Women who come here feel that they can freely talk about their problems. If the gender of this place was male, they would have had trouble telling us everything. Women come to the Center with different demands. During the first consultation, we try to explore the story behind the demand and reveal the difficulties she faces.

For example, a woman came to the Center and wanted to share with us issues related to her husband’s siblings, which she said created a negative influence on their children. But as the interview went on, we realized that it was not the only problem. It turned out that the woman had been exposed to psychological violence continuously. I referred her to a psychologist, a lawyer, and the child protection unit. Then, she joined Turkish language classes at the Center. She received counseling in women’s rights and violence against women. Meanwhile, we conducted family interviews where her husband was also involved. We understood that her husband was also upset about the situation. Later, her husband’s sister came to the Center and started attending Turkish courses as well. This is how SADA Center was able to support the empowerment of a woman and her family.

Amid COVID-19, we continue monitoring the welfare of all Turkish and Syrian beneficiaries from home. Our phones are turned on and reachable during the day, night, and weekends. I and the other colleagues at the SADA Center adapted our working modalities and lives to the new circumstances to continue supporting and reaching out to women.

During one of the curfews, a woman called and told me that she was subjected to all kinds of violence by her husband. She ran away to her parents' house with her children but said her husband might be able to find them. I informed her about her rights and called the police. As there was a curfew, we could not go to the police on our own, so the police took me and the woman to the police station. The woman demanded protection for herself and her children by explaining what she was going through. We were able to grant protection amid COVID-19 measures.

I am not just supporting someone when I do my job. I learn a lot from every woman I support. I see that we have different states of womanhood, different experiences, and different lifestyles. But at the end of the day, women support women. We touch each other’s lives, understand and empower each other.”

Related News
09/12/2021
In the words of Rahime Hasan: “We should not overlook the place of men in the fight against violence”
21/07/2020
Gender assessments in Europe and Central Asia reveal pandemic’s devastating impact on women
18/06/2020
Press Release: UN Women Turkey marks World Refugee Day on the 10th Year of the War in Syria
04/06/2020
UN Women and the Government of Japan gearing up to empower women affected by COVID-19 in Europe and Central Asia
04/05/2020
Amid COVID-19 lockdown in Turkey, UN Women runs campaign to curb violence against women and promote gender equality at home
END_OF_DOCUMENT_TOKEN_TO_BE_REPLACED