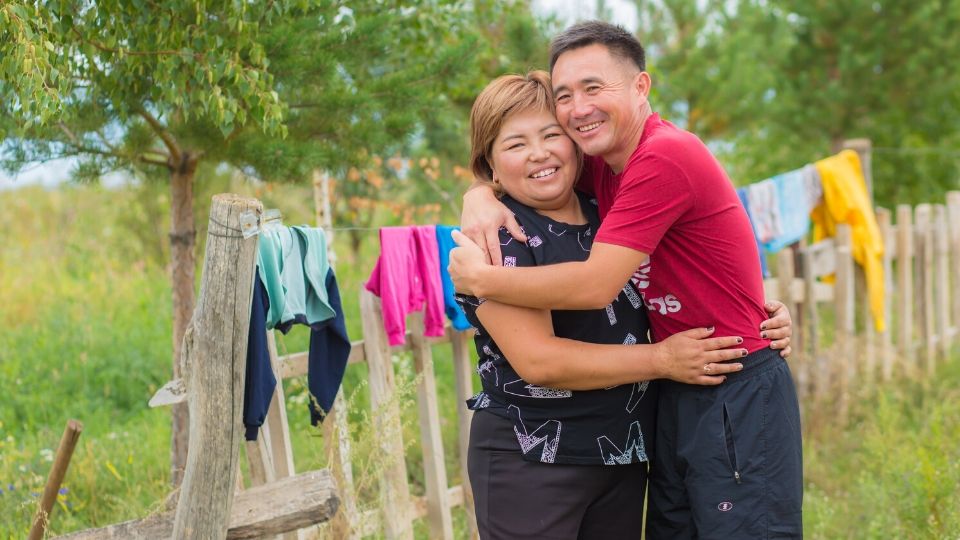 Maksat Kurmanaliev and his wife Eliza Koilubaeva have been married for ten years and have three children together. They are residents of a small village called Kytai in the eastern Issyk-Kul region. Here, and across Kyrgyzstan, a strong patriarchal culture translates into social norms where men rarely participate in domestic housework, and often their duties are limited to making money and decisions in the family. Until recently, Maksat and Eliza lived this way, like everybody else.

“I always considered myself the head of the family,” says Maksat. “I got used to holding leadership positions at work, and when I returned home late, I used to say: ‘I’m tired, don’t bother me’, ‘Is there any food?’, ‘I don’t have time for household chores!’ Eliza also worked, took care of the children, and did all the household work.”

But things began to change last year when Eliza and Maksat participated in a UN Women training called Gender Action Learning System (GALS). This is a community-led empowerment methodology addressing unequal power relations and harmful social norms authored by global gender consultant Linda Mayoux. She first applied the methodology in Kyrgyzstan together with IFAD and Community Development Alliance (Public Foundation) as part of the joint programme “Rural Women’s Economic Empowerment” by IFAD, UN Women, World Food Programme and FAO. The overarching goal of GALS is to promote harmonious and non-violent relationships in families and communities through a more participatory approach.

“The first shock for me was our family budget discussion,” Maksat recalled of the training. “I suddenly realized that although Eliza earns half as much, she manages her budget more efficiently, meeting our family’s basic needs. In addition to her main job, Eliza managed not only to do all the household chores and successfully raise children, but also to generate additional income by selling milk. When I saw the actual picture of what was happening, I decided that I needed to rethink my views on our life together. I was ashamed of myself, I wanted to compensate the lost time and attention to my wife,” Maksat said.

UN Women facilitated the GALS training within the context of the “Across generations and gender borders – Communities combatting gender-based violence in Kyrgyzstan” project, funded by the European Union and implemented in a partnership with NGOs HelpAge International and Agents of Change. Through the project 11,457 individuals (7,681 women and 3,776 men) like Maksat and Eliza have been reached in the target municipalities. Designated trainers have taught 46 community champions to share their knowledge and skills with other community members. They, in-turn, have cascaded their knowledge and skills to others. “In 2019, the project largely focused on connecting and building synergies between various groups of beneficiaries promoting a life free of gender-based violence for women and girls within their communities,” says Nurai Mamytova, UN Women Project Coordinator.

“Now all of us [in the family] realize how many goals we can achieve if we support each other and act as a team. Our family is only about us, not our relatives or neighbors, and it is in our hands to build a better future for our children, and to be their role models,” says Eliza.

After the trainings Maksat and Eliza reviewed and changed a lot in their family life: division of household chores, distribution of the family budget, joint decision-making and co-parenting.

“I began helping my wife with the household chores, learned how to cook. I started milking cows myself, which in our culture is considered to be quite shameful for a man,” Maksat said. “But this was not the most difficult. The hardest thing for us was to break stereotypes, especially in the village. When my friends, relatives and neighbors saw me milking a cow, they openly scoffed, filmed videos and said they would post it on the Internet. Relatives joked that my wife took the man-power from me. But thanks to the support of Eliza, I was able to overcome those difficulties,” he said.

Today Maksat considers it as a social responsibility to convince more men to do household chores on equal terms with their spouses. Maksat and Eliza also changed the way they communicate with their children. By starting to discuss their plans and dreams with their kids, they learned to effectively listen to them and they became closer.

"By asking our children what dreams they pursue, we, as parents, can better understand their needs, motivations, and fears. I am happy that both Maksat and I are also transforming as parents. We've never realized before how meaningful it is for us to spend time with our children. They know so much and we learn even more from them every single day,” says Eliza.

“GALS helps families plan for life. Joint planning promotes an atmosphere of trust and mutual understanding in the family, bringing husband and wife, parents and children closer together,” said Saliya Akulova from SCO Agents of Change, one of the implementing partners.

Maksat says that thanks to the training his family’s life together began to sparkle with new colors. “We actually decided to buy a milking machine, because I see the bad effect that milking has on hands and nails. I also want to buy my wife a car and help her get her driving license so she can take the kids to school and go to work,” he said. “My Eliza blossomed even more when she started having more time for herself and thinking about fulfilling her own dream - to open a language school.”

Related News
02/12/2021
I am Generation Equality: Amiran Karatsev, advocate for women’s rights and feminism
12/11/2021
Call for Proposals to support the establishment of a regional funding mechanism for the Central Asia women’s movement.
04/11/2021
I am Generation Equality: Gresa Hasa, feminist activist
30/09/2021
In Kyrgyzstan, a new a game on household chores encourages players to reflect
30/08/2021
Call for Proposals: Elimination of gender-based stereotypes and promotion of women’s active role in all aspects of a society
END_OF_DOCUMENT_TOKEN_TO_BE_REPLACED