UN Women and the Ukrainian Institute have created an annual award to recognize women in the arts because they have largely been an invisible part of cultural history. As the award gains popularity, the aim is for the winners to inspire a new generation of Ukrainian women artists. 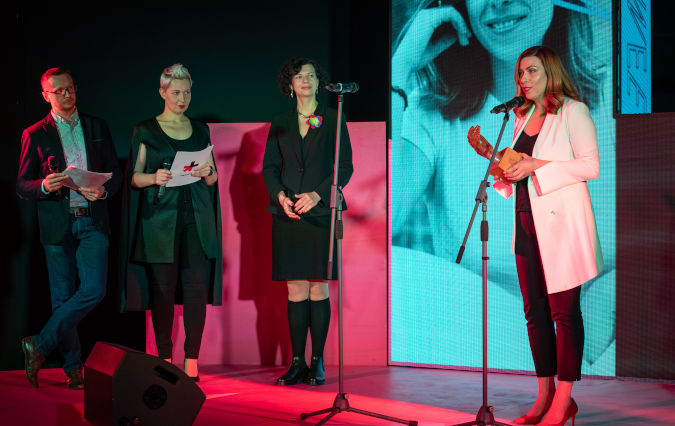 Women artists have always struggled for a place in the history of arts. An annual award in Ukraine aims to change that. The organizers hope it will become a milestone in Ukrainian cultural development to inspire women towards new artistic achievements.

UN Women Ukraine and the Ukrainian Institute, a state institution that represents Ukrainian culture internationally, presented in March 2020 the second Women in Arts Award marking International Women’s Day. Begun last year as part of HeForShe solidarity movement for gender equality, Women in Arts is an independent award to mark the emergence of a new tradition in Ukrainian arts.

This award allows women artists to be seen and heard and recognized on a national scale. It marks an important step in addressing a void in the art world.

“Historically, women have had fewer opportunities for self-realization in the professions, particularly in art and culture,” said Dominika Stojanoska, acting Representative of UN Women Ukraine. “That is why their work remains largely invisible in art history and less accessible to the general public even now. This award seeks to establish a new tradition of recognizing women's contributions to culture both in Ukraine and abroad. At the same time, we want to emphasize the importance of linking artists from generation to generation,” she added.

Oksana Zabuzhko, one of the Ukraine’s most famous writers, once said that the biggest problem of modern women artists in Ukraine is that every generation must start from the beginning. 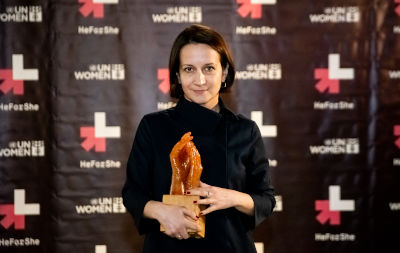 Director, scriptwriter, curator Natalia Vorozhbit received the award  in the category of women in theater and film. Photo: Nikita Yurenev

The Ukrainian Institute’s team of curators has updated and improved last year`s contest regulations and expanded the number of categories. Arts Week 2020 website lists the jury and award regulations.

Here are this year’s winners:

The winners were named during the HeForShe Ukraine anniversary celebration. Two HeForShe advocates in Ukraine, Michael Shchur and Yaroslava Kravchenko, moderated the awards ceremony. The Kyiv Academy of Media Arts students and YUKO – a Ukrainian music group that combines folk and contemporary genres – performed at the closing. Maria Kulikovska, an acclaimed Ukrainian woman sculptor, again created the awards statuette, which symbolizes the power of Women in Arts.

To reflect the continuity of generations, the winners of Women in Arts 2020 are automatically included in next year’s jury and will award the winners in their respective categories. The winners of the 2020 Award will also be featured in a series of interviews and podcasts with one of the most popular online media in Ukraine. UN Women Ukraine will continue to support and highlight their achievements with communication campaigns and events.