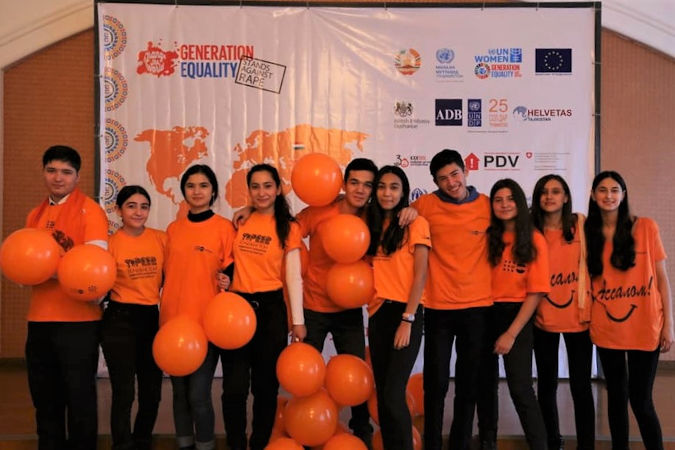 To mark the opening of 16 Days of Activism Campaign in Tajikistan, UN Women kicked off the joint campaign “Make the Lotus orange!” The entire Lotus building, where most UN agencies are based, was decorated with orange balloons and UN agencies joined forces to call for a brighter future and a world free from violence against women and girls. Over 150 people participated and committed to promoting and defending the rights of women and girls.

UN Women in Tajikistan developed an awareness-raising campaign for 16 Days of Activism to draw attention to the issues faced by women and girls in Tajikistan and to encourage the realization of their rights and opportunities. UN Women closely cooperated with the Committee on Women and Family Affairs under the Government of the Republic of Tajikistan and PO Hamsol ba Hamsol, a public organization. As part of the campaign, a panel discussion was organized which drew gender-based violence activists and over 200 people. The discussions covered women’s and girls’ access to education, social protection, access to justice, access to information, use of modern technologies and innovations, cyber violence, and economic empowerment. Short social videos, dance performances, and mobile theatres drew attention of participants to the issue of violence against women and girls. Participants reconfirmed their political will and strong commitment to ending gender-based violence. 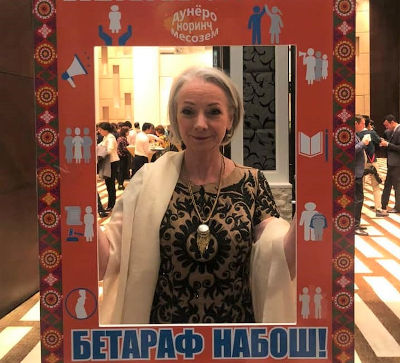 Mrs Yasmine Gouédard, Ambassador of France to the Republic of Tajikistan, during opening ceremony of the Tajik Film Festival. Photo: Sabrina Akhmadzoda

UN Women in Tajikistan, in collaboration with the French Embassy, dedicated the opening ceremony of the Tajik Film Festival “Golden Tulip” to 16 Days of Activism. The festival is organized by the Bactria Cultural Center, with support from the French Embassy in Tajikistan and the Tajikfilm State Film Studio. The purpose of the festival is to support Tajik cinematography, development of national film production, preservation of cultural identity and the promotion of Tajik cinema. During the festival, movies on gender stereotypes, family relations, and gender relations will be presented to the guests of the festival.

UN Women Tajikistan and the European Union Delegation to Tajikistan joined forces to raise attention to violence committed against women and girls. They invited UN agencies and Development Partners to mark the launch of the 16 Days of Activism campaign by lighting the EU Building in orange. Her excellency EU Ambassador Marilyn Josefson and Aziza Hamidova, UN Women Country Program Manager, emphasized the importance of the campaign and encouraged everyone to actively take part in eliminating all forms of violence against women and girls. 50 people participated at the event.