LBTIQ women in Ukraine put discrimination in the limelight 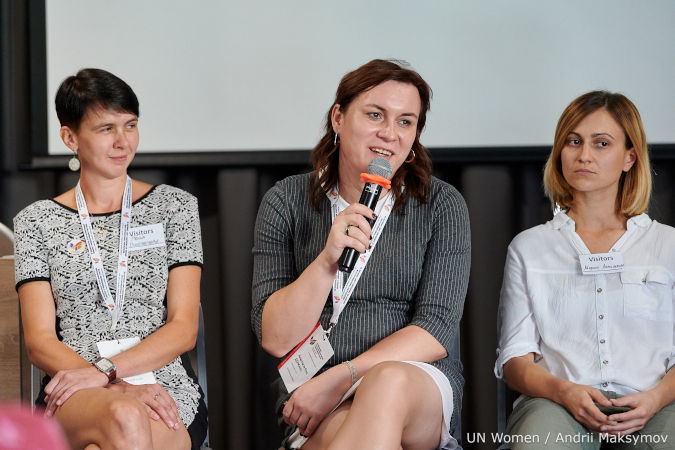 LBTIQ women gathered in Kyiv on 12 September during the XII National LGBTIQ Conference to share their diverse experiences as women veterans, internally displaced people, women with disabilities, trans women, women living with HIV and human rights activists. The meeting aimed to put a limelight on the discrimination that LBTIQ women face and address their concerns and needs.

“When discussing women's rights, one must understand that our experience is shaped through the lens of combining or combating different identities. After all, women are a diverse group and may belong to various ethnic, national or age groups, have different sexual orientation, gender identity and expression, have a disability, among other factors. All of the above can also lead to multiple discrimination or violence,” said Olena Shevchenko, Head of LGBTIQ NGO Insight.

The participants shared their stories of creating change and successful advocacy for women’s rights.“I am a vocal trans woman because I can be of help to others who reach out to me with questions about the trans community across Ukraine,” said Anastasia Eva Domani, a Trans Coalition activist. 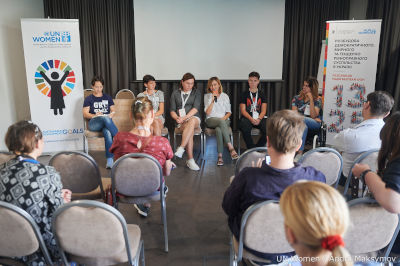 Social stereotypes, stigma and prejudice are the primary factors that shape women’s experiences and result in discrimination. Panellists discussed the diversity of LBTIQ women living in Ukraine and the violence and multiple discrimination they may face because they belong to several vulnerable groups at the same time.

“When I had to move from Donetsk to Kyiv, I faced a choice: to stay in a conflict-affected city that’s full of homophobic attitudes or to become an internally displaced person and face discrimination as an outsider,” said Maryna Lemyschenko, an LGBTIQ activist. “Now that I’m the only woman in the management at work, and openly lesbian, I have to constantly brush off sexist and homophobic jokes from my male colleagues and work more to earn the same paycheck as them,” she added.

“In the army, there is this idea that a woman cannot rise above a certain position, because it is ‘not acceptable’. Women must prove themselves twice more than men,” said Nastya Konfederat, a volunteer and military cartographer. 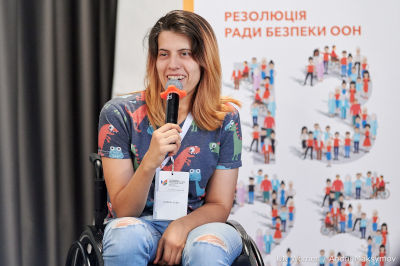 While the experience and discrimination of #LBTIQ women can be very different from that of gay and bisexual men, gender-based systemic discrimination is often not taken into account in LGBTIQ communities as a matter of priority and is often ignored.

“Now I laugh off people’s ignorant and sexist comments about my disability, such as ‘you should have a child and then you will walk again’ or ‘you need a man to take care of you now,’” shared Sofiya Grubova during the panel discussion.

“I have been to many LGBTIQ conferences, but this is the first event that truly addresses intersectionality in a comprehensive way,” highlighted Konstyantyn Scherstiuk, one of the participants of the discussion.

The panel discussion was organized by the UN Women Ukraine project “Building democratic, peaceful and gender-equal society in Ukraine” funded by the Government of Norway.

Related News
25/06/2020
In the words of Olena Hryhoriak: “The issues of violence and discrimination should not be silenced”
16/03/2020
International Women's Day around Europe and Central Asia
09/12/2019
Women living with HIV from Europe and Central Asia convene in Tajikistan to spotlight their role in combatting AIDS
29/11/2019
In the words of Yana Panfilova: “You can talk about HIV a lot, but a personal example is what can really change people’s attitude”
07/11/2019
HeForShe Congress examines how to speed up gender equality in Ukraine
END_OF_DOCUMENT_TOKEN_TO_BE_REPLACED