In the words of Guljahon Bobosadykova: “What did I do today to improve the situation of women and girls?” 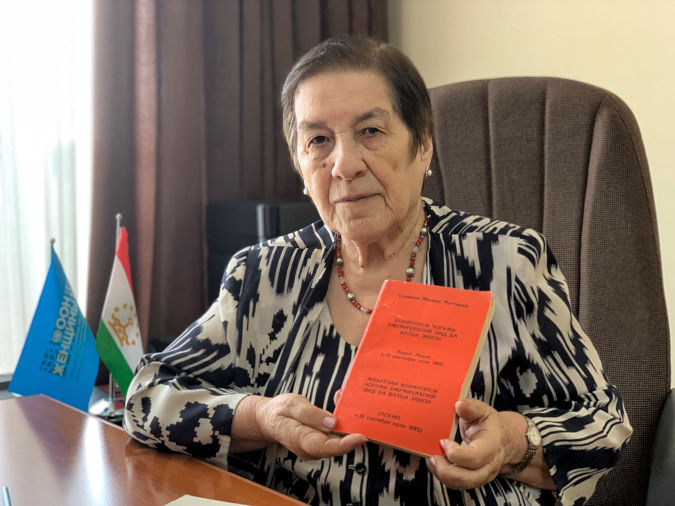 Guljahon Bobosadykova is the chairperson of the Tajik coalition, From Equality de Jure to Equality de Facto. Nearly 25 years ago, she represented her country at the Fourth World Conference on Women in Beijing, China, which was the largest gathering ever held of gender equality advocates. During the Conference, she was the chairwoman of the Association of Women with University Education. She offers her perspective to UN Women on gender equality and the challenges that women still face in Tajikistan and Central Asia.

In 1995, the world was on the threshold of the 21st century and a new millennium. Humanity faced ambitious challenges that couldn’t be tackled without equal participation of women in development. Inequality between men and women persisted. The world lacked a unified global vision on the status and role of women, something necessary for the welfare of all of humanity.

That was about to change. The representatives of 189 countries at the Fourth World Conference on Women adopted the Beijing Declaration in China, in September 1995. It was a Declaration built on the firm belief in a world where every woman and girl would enjoy freedom, independent choice, realize her rights, live her own life free from violence, participate in decision-making, obtain education and a profession, and receive equal pay for equal work.

The last 25 years have seen unprecedented political, economic and social transformations in Central Asia. For Tajikistan this period meant the creation of an independent state and new institutions, structures and mechanisms.

Notably, Tajikistan ratified international conventions on human rights, including the Convention on Elimination of all forms of Discrimination Against Women.

National legislation helped to raise the status of women, empowering them with constitutional rights and freedoms, and eliminating vestiges of prejudices under the law.

The aftermath of the Beijing Conference meant new attention to the education of girls in Tajikistan, following a drastic enrollment decline in secondary, primary schools and high schools. Quotas on higher levels of education for girls from the most remote mountain regions were introduced in 1997. The same quotas were applied in 2006 for boys from the regions as well, which made it possible for girls and boys to obtain higher education and contribute toward development of the country.

Much work remains. In my view, three main gender equality issues persist in Central Asia and Eastern European countries. The first is participation of women in decision-making processes. Women leaders are mainly concentrated in lower - and mid-level management.

The second enormous challenge that must be tackled is violence against women. Such violence can be eliminated only when societal views shift and institutional mechanisms improve to implement the laws on domestic violence.

Third, women are sometimes restricted within their families and held back from realizing their potential. Women have strengths that can be brought to bear for society`s development.

Women can do a lot!

That’s why we need to fight for equality and women`s rights. Ask yourself every day: ‘What did I do today to improve the situation of women and girls?”

Related News
12/11/2021
Call for Proposals to support the establishment of a regional funding mechanism for the Central Asia women’s movement.
21/04/2021
In the words of Natalia Idrisova: “It is necessary to find ecological options in which women can realize themselves and bring benefit to their communities”
19/10/2020
Press Release: Women’s rights advocates from Central Asia discuss challenges and seek new pathways to systemic change for gender equality
07/09/2020
Press Release: Women’s rights advocates from the Western Balkans and Turkey gather to discuss new pathways to gender equality and call for urgent action
23/06/2020
Gulbahor Majidova: Overcoming loss with a determination to help others in Tajikistan
END_OF_DOCUMENT_TOKEN_TO_BE_REPLACED