UN Women is doing its part to encourage girls in Kyrgyzstan to follow a career in STEM. With a coding caravan, rural girls learn some important basics of programming. 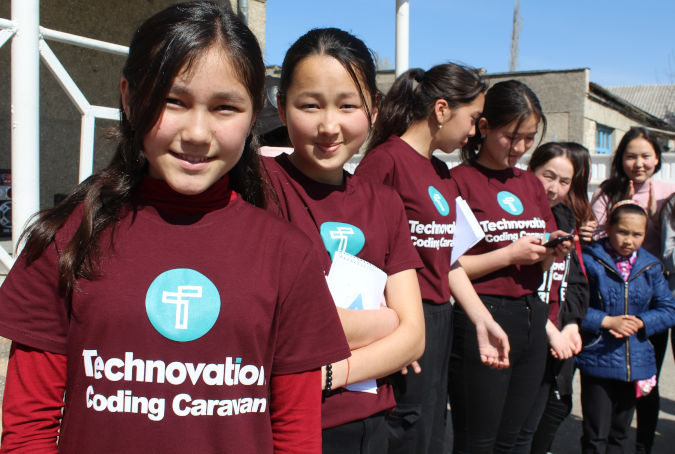 Women are underrepresented in STEM — science, technology, engineering and math. UN Women in Kyrgyzstan is helping to do something about it. Hundreds of rural girls across the country participated in the first Technovation Coding Caravan on programming for girls in spring 2019. The coding caravan, which kicked-off with two days of training, was launched in Talas Province and moved on to Issyk-Kul, Naryn, Jalal-Abad, Batken, and Osh provinces.

“I used to think that only men can code and become a programmer. Now I want to study programming and pursue my career in STEM,” says Erkinai Omurzakova, 17, from Jalal-Abad Province.

“I always wanted to become a programmer, but others used to tell me that this career is not for me. After receiving training, all my doubts and fears disappeared. I decided to follow my dream,” explains Alina Baktybekova, 16, from Issyk-Kul Province.

Erkinai and Alina are two of more than 600 school girls, ages 10-18 years old, who learned programming basics, and how to make prototypes of mobile applications, work in a team, conduct marketing research, write business plans, produce videos and presentations, and use technology to tackle socioeconomic problems of Kyrgyzstan. 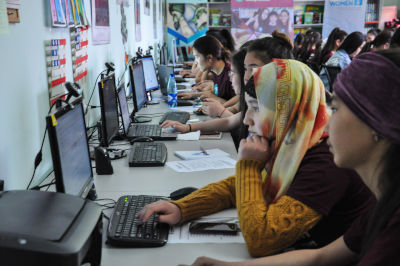 The caravan has inspired rural girls to reach even higher and take part next year in the annual Technovation Challenge, the world’s largest global tech entrepreneurship competition for girls. The programme offers girls around the world an opportunity to learn the necessary skills to emerge as tech entrepreneurs and leaders.

“I grew up in Talas Province. The fact that I came from a rural area made girls believe in themselves even more,” says Ainura Sagyn, a UN Women partner and official Regional Ambassador, representing the Technovation Challenge in Kyrgyzstan. “The Technovation Coding Caravan is just a small seed which, I hope, will lead to empowerment of hundreds of rural girls pursuing a career in STEM.”

“Unfortunately, in Kyrgyzstan and all over the world there is a low representation of women in STEM. UN Women promotes empowerment of women and girls, especially those who have limited access and resources to pursue a future in STEM,” says Ulziisuren Jamsran, Representative of UN Women.

Technovation Coding Caravan for girls is led by the UN Women partner Technovation, with support from the UN Women Kyrgyzstan Country Office, the US Embassy in the Kyrgyz Republic, and a network of the top talent in business, design, and technology in the world, known as TopTal.

Related News
09/08/2021
I am Generation Equality: Jasmina Zahirović
29/06/2021
Take Five: “What we read to children today shapes their actions tomorrow”
22/04/2021
In the words of Dinara Ruslan: “Confidence should be built in the family from childhood”
12/12/2019
I am Generation Equality: Zere, feminist singer
06/12/2019
Altynai Omurbekova: “We must offer our unconditional support to the youth so that they can further advance gender equality”
END_OF_DOCUMENT_TOKEN_TO_BE_REPLACED