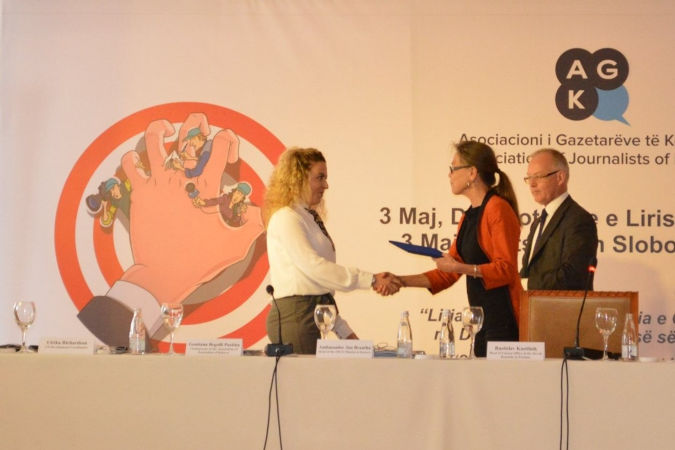 To mark World Press Freedom Day on 3 May in Kosovo[1] this year, the Women’s Empowerment Journalism Prize was awarded for the first time. The prestigious prize, supported by UN Women, showcases reporting that promotes women’s leadership, including their role in peacebuilding, political life, advancing human rights, economic and social development. It also throws a spotlight on the importance of advancing gender equality and women’s empowerment through the media in Kosovo.

Journalist Artinë Muçiqi from Kosovo 2.0 won the Women’s Empowerment Prize for her article “Life and Death: The Harsh Reality of Pregnancy in Kosovo,” which features the story of a Roma girl who lost her baby and calls to end exclusionary health treatment against women from minority communities.

The Prize announcement was part of several high-profile activities in Pristina and on social media aimed at bringing to the fore issues around journalists’ safety and security to freely inform the public and contribute to Kosovo’s development. Organized in partnership between the Association of Journalists in Kosovo, UN Women, the Organization for Security and Co-operation in Europe and the UN Kosovo Team, a highlight of the day’s events was a dynamic roundtable discussion. 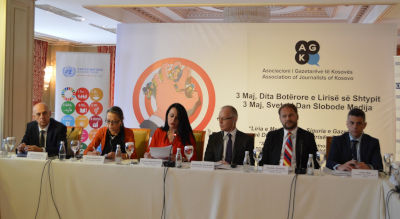 Panelists in the roundtable “Challenges to Freedom of the Media and the Safety of Journalists in Kosovo” Photo: UN Women in Kosovo

Exploring the topic: ‘Challenges to Freedom of the Media and the Safety of Journalists in Kosovo’, this discussion brought together media, civil society, rule of law, academia, as well as international and local development agency representatives. It helped advance respect for the right to expression, while also discussing the state of the media in Kosovo, with a focus on gender equality.

In pointing out the critical role that journalists play in advancing gender equality, Ulrika Richardson, UN Development Coordinator in Kosovo, said that: “media is dominated by politics, minimizing the space for societal issues such as gender equality”. She also expressed concern about the global trend towards the “erosion of citizens’ trust in what is written, constituting the biggest threat to democracy”.

“Gender inequality is present in the media, where women journalists remain discriminated against and men benefit greatly from the space reserved for them on prime time, their salaries as well as leading positions within the media,” Gentiana Begolli Pustina, Head of the Association of Kosovo Journalists, said during the event. “A lot remains to be done in order to change this reality of the Kosovo media,” she said.

The day also featured a multimedia installation entitled: ‘The Noise’ by artist Driton Selmani. The installation used a white truck parked in Pristina’s centre to symbolize the obstacles media face, including journalists’ different experiences based on gender. Take home messages in the specially designed postcard format with information regarding the situation of journalists, including the additional risks of women journalists from a global perspective of gender-based violence and male dominated media sphere, were distributed

Activities on World Press Freedom Day were organized as part of the Empowering Youth for a Peaceful, Prosperous, and Sustainable Future in Kosovo project. This project is supported by the UN Peacebuilding Fund, and implemented by UN Women, UNDP and UNV, as well UNICEF.

Related News
08/12/2022
In the words of Mrika Nikçi: “Even though he left me with trauma, I know I am strong enough to overcome it.”
27/09/2022
Documentary and Short Film Festival Celebrates the Power of Women in Kosovo
15/03/2022
The Mountain Climber
10/11/2021
From Where I Stand: “When we do not give up, when women support each other, we can always succeed” says Hive director
11/08/2021
Giving young people the tools to overcome stereotypes
END_OF_DOCUMENT_TOKEN_TO_BE_REPLACED