In the words of Ayşegül Özdil: “Being here with refugee children has had a big impact on my life’’

Ayşegül Özdil is a kindergarten teacher at the SADA Women Empowerment and Solidarity Centre, in Gaziantep, near Turkey’s southern border with Syria. Established by UN Women and funded by the EU Regional Trust Fund in Response to the Syrian Crisis (the EU “Madad” Fund) and the Government of Japan, the SADA Centre supports the empowerment of refugee and host community women, their engagement in social activities and integration into the labour force. It helps trainees acquire skills and knowledge to take up new jobs, establish businesses and improve their lives and overall safety under the “Strengthening the Resilience of Syrian Women and Girls and Host Communities in Turkey” project, implemented by UN Women in partnership with ILO, SGDD-ASAM (Association for Solidarity with Asylum Seekers and Migrants) and Gaziantep Metropolitan Municipality. 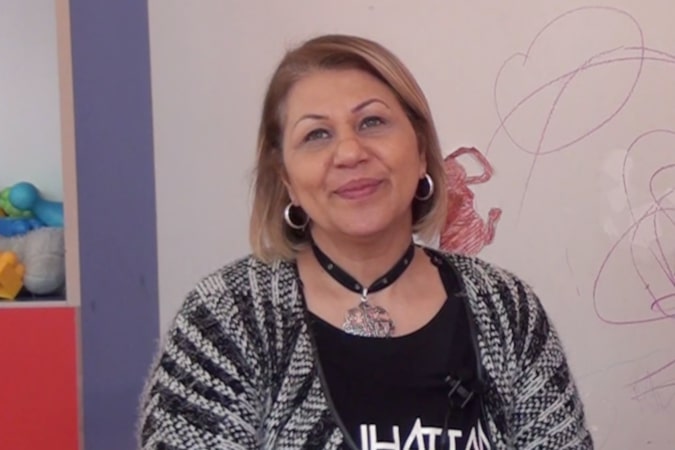 Before joining the SADA Centre, I only had experience working with Turkish children. But being here with refugee children has had a big impact on my life.

Now, I teach not only Turkish children, but also Syrian, Afghan, Iraqi and Turkmen children whose mothers are the beneficiaries of the SADA Centre.

While teaching children Turkish and playing games with them, I observe them very carefully. I monitor their psychological and cognitive development to guide them when needed. Children who regularly come to this nursery have improved their cognitive skills a lot. They learned how to make friends. They learned the language and played an important role in building relations between mothers from the host and refugee communities.

When women come here, they leave their children with me, knowing that their kids are in a safe place. The success of the SADA Centre in reaching over 5,000 refugees and host community women is partly due to the childcare services that we provide.

While teaching Turkish and the pre-school curriculum at the nursery, I also learned from children how to create an intercultural dialogue. We play their traditional games, I teach them Turkish and they teach me their languages. This multicultural environment at the kindergarten encouraged communication between refugee and Turkish women. Mothers began to interact with each other and talk about their children. Gradually, they started sharing their experiences of their children’s adaptation, nutrition and learning processes. This creates friendship and dialogue as well as a better understanding of each other.”

Related News
09/12/2021
In the words of Rahime Hasan: “We should not overlook the place of men in the fight against violence”
18/08/2020
In the words of Zeynep Denli: “Women support women. We understand and empower each other”
19/07/2019
Donors and partners visit Syrian refugee women in Turkey, vowing continued support to SADA Women-only Center
19/06/2019
Compelled and empowered, Syrian refugees changing traditional gender norms
19/06/2019
From where I stand: “A whole new life began and now I have a dream”
END_OF_DOCUMENT_TOKEN_TO_BE_REPLACED