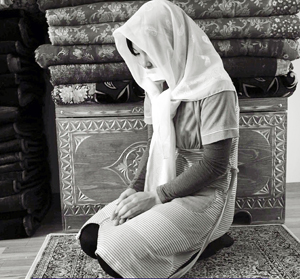 This poster of a woman with tape on her mouth, symbolizing her inability to speak out, depicts a bride who was kidnapped. The poster was produced by the UN for the 16 Days of Activism against Gender Violence Campaign 2011 in Kyrgyzstan. Photo credit: UN Gender Theme Group Kyrgyzstan/Baktybek Meimanbekov

BISHKEK, 31 May 2018 – The United Nations System in Kyrgyzstan is concerned about the crime reported in the media when a victim of bride-kidnapping was murdered by her abductor.

According to the latest available data in Kyrgyzstan, 13,8 per cent of women aged under 24 married through some forms of coercion. The United Nations in the Kyrgyz Republic are committed to support for the eradication of this unlawful practices a matter of priority in line with the agreements signed with the Government of Kyrgyzstan valid until 2021.

Child and/or forced marriage is a fundamental violation of human rights with far-reaching consequences not only to the individuals directly involved but to the well-being of the entire society. Practices such as bride kidnapping, forced marriage or Ala-Kachuu do not belong to the culture and tradition of Kyrgyzstan but are a violation of the rights of vulnerable people.

Kyrgyzstan has taken significant steps to strengthen its laws such as the prohibition to perform child religious marriages. However, more work needs to be done in the prevention and prosecution of perpetrators as well as ensuring the protection of victims.

UN agencies in Kyrgyzstan are calling on Kyrgyzstani authorities to take all appropriate measures to stop such practices and fulfil its domestic legislation and international treaties that the country has joined.

Related News
21/04/2022
In the Words of Ayşegül Küçükafacan: “Thanks to the small grant by UN Women, I am stronger in combatting violence and abuse”
04/03/2022
UN Women and the Ministry of Justice take concrete steps to advance women’s access to justice in Turkey
20/04/2021
A new, first of its kind service provision has proved useful in protecting survivors in Albania
28/08/2017
Kazakhstan’s new plan to end domestic violence demonstrates multi-disciplinary action
09/12/2015
We must focus on changing attitudes and realizing women’s human rights" — Executive Director on ending violence against women
END_OF_DOCUMENT_TOKEN_TO_BE_REPLACED