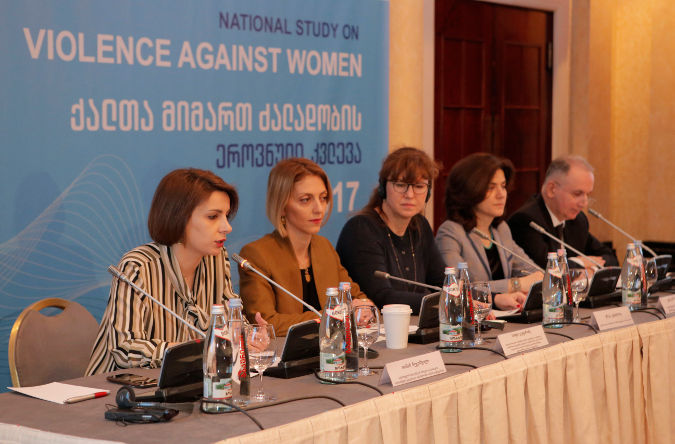 Opening of the presentation of National Study on Violence against Women in Georgia. Photo: UN Women/Maka Gogaladze

The key findings of the Study were released by UN Women, EU and GEOSTAT together with partners from the government, development sector and civil society at a presentation of the study’s summary report in Tbilisi on 6 March 2018. The study findings provide data on the prevalence of domestic violence and non-partner physical and sexual violence, as well as the perceptions and awareness of women and men on gender and violence in Georgia. For the first time in Georgia, the study also generated data on the prevalence of sexual harassment and stalking at the national level. This is the first nationwide research on violence against women conducted in Georgia since 2009 (UNFPA).

The study was implemented throughout 2017 and combined quantitative and qualitative research. In total, 6,006 women aged 15-64 and 1,601 men aged 15-64 have been interviewed across the country. If one combines all forms of violence, the study found that one in every four women has experienced gender based violence in their lifetime. Among those, some 15,000 women have experienced physical violence from intimate partner during pregnancy and 9% of women in Georgia admitted being subject to sexual violence in childhood, before the age of 18.

The study findings indicate that women and men show a high degree of tolerance and acceptance towards the use of physical violence against women in relationships, and share inequitable views on sex and sexual violence. Of those surveyed, almost one quarter of women (22 per cent) and one third of men (31 per cent) believe that wife-beating is justified under certain circumstances. Moreover, almost one quarter of all women (23 per cent) and nearly half of all men (42 per cent) believe that a wife should obey her husband even if she disagrees. 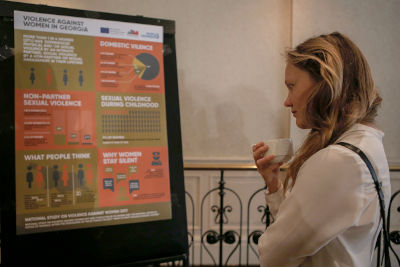 1) The key findings of the Study were released in the form of infographics. Photo: UN Women/Maka Gogaladze

“The study findings fill the gap in the nationally representative data on the prevalence of violence against women in Georgia and provide baseline for the nationalized Sustainable Development Goals indicators. The data analysis will further inform policymaking as well as awareness raising interventions aimed at prevention and effective response to violence against women and girls in Georgia.” – Erika Kvapilova, UN Women Country Representative in Georgia stated.

Gogita Todradze, Deputy Director of GEOSTAT highlighted importance of technical assistance provided by UN Women to GEOSTAT in developing national capacity on conducting violence against women studies in line with the globally established methodologies and standards, stressing that this will “enable GEOSTAT to replicate similar prevalence surveys in future as prescribed by the obligations undertaken under the Istanbul Convention.”

Related News
28/02/2018
In the words of Ketevan Khidasheli: “To counter today’s lack of volunteerism, more female activists are needed”
22/05/2017
Call for Proposals: Regional Forum for the Promotion and Monitoring Progress of the Implementation of Istanbul Convention in Western Balkans and Turkey
22/05/2017
Call for Proposals: Support the establishment and strengthening of regional platforms of civil society organizations
29/04/2017
Gender equality drives Georgia's future
14/04/2016
New shelter offers refuge to survivors of domestic violence in Georgia
END_OF_DOCUMENT_TOKEN_TO_BE_REPLACED