The 2018 Global Open Day on Women, Peace and Security in Kosovo focused on women’s political participation, and the key factors that inhibit their full engagement in the public sphere.

Women face cultural and societal obstacles in Kosovo[1] that inhibit their political participation, according to attendees at a dialogue held on 5 March in Pristina for the UN Global Open Day on Women Peace and Security. 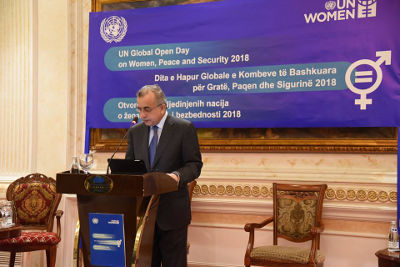 Zahir Tanin, Special Representative of the Secretary-General and Head of the United Nations Mission in Kosovo. Photo: UNMIK

Examining the personal experiences and obstacles faced by women candidates from the 2017 elections in Kosovo, participants agreed that a lack of sustainable support from political parties, discrimination and stereotyping of candidates, and limited capacity-building opportunities were key challenges inhibiting women’s participation in politics and decision-making in Kosovo.

Speaking at the event, Zahir Tanin, Special Representative of the Secretary-General and Head of the United Nations Mission in Kosovo, noted that women needed political representation and access to political decision-making before they could exercise equal influence for good governance and sustainable peace.

Xhavit Haliti, Deputy President of the Assembly of Kosovo, emphasized the importance of equal engagement of men and women. 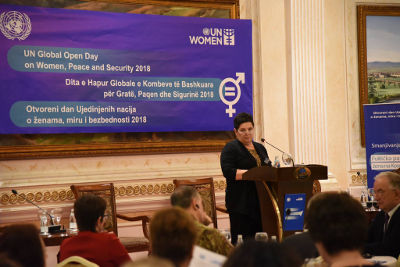 Calling for an increased engagement with men and boys to ensure that women have more equal opportunities in politics, Flora Macula, UN Women Kosovo Head of Office, said: “Democratization of political parties is key for women’s inclusion in decision-making.”

Women candidates pointed to cultural and societal barriers which inhibit women’s political engagement. CSO representatives agreed, noting that the current patriarchal society contributes to a lack of political will that limits public engagement space for women.

Discussions also addressed gender quotas. Panellists pointed to the shortfalls in Kosovo in the Law on Elections, which requires political parties to list 30 per cent female candidates, and the Law on Gender Equality, which stipulates that political parties should take measures to achieve equal representation of women and men.

Related News
27/05/2020
Take Five: “Women leaders around the world have demonstrated successful management of the pandemic”
15/12/2022
Turkish Parliamentarians set sights on new policies and a road map for ending violence against women in politics
24/08/2022
Kyrgyzstan hosted the second "Women's Leadership – A Breakthrough into a New Era” National Forum
10/03/2021
This is what leadership looks like: Meet Elena Crasmari, the only woman in her local council in Moldova
09/03/2021
This is what leadership looks like: How three women mayors in Moldova are making a difference every day
END_OF_DOCUMENT_TOKEN_TO_BE_REPLACED