Take Five: “Preventing early marriage is a key priority for ending violence against Roma, Ashkali and Egyptian women in Kosovo” 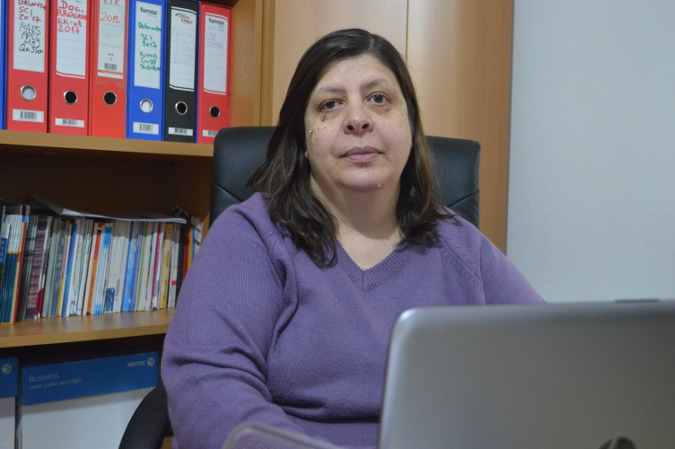 Shpresa Agushi is a leading activist for the rights of Roma, Ashkali and Egyptian Women in Kosovo[1]. She has worked in various non-governmental organizations and institutions dealing with human rights. In 2001, she registered the first Roma women's NGO, ‘Romane Romnja’, and through her work has been advocating for gender equality, as well as supporting the further education of Roma girls and boys. In 2007, Ms. Agushi was elected Executive Director of the Network of Roma, Ashkali and Egyptian Women's Organizations of Kosovo (NRAEWOK) – a position she still holds today.

Your network has extensive experience working with Roma, Ashkali and Egyptian Women in Kosovo. How would you describe their current situation with regards to violence against women and girls?

Although Kosovo’s institutions have made progress in establishing relevant legislation, policies and implementation mechanisms, domestic violence remains one of the most challenging issues for the government and society, especially for women from Roma, Ashkali and Egyptian communities. These women are in a particularly difficult situation due to their lack of education. This is often linked to harmful practices such as early marriage, which result in high rates of school drop-outs among young girls. As women and as members of Roma Ashkali and Egyptian communities, they face discrimination and prejudice on two fronts: from the majority of the population and within their own communities.

What are then main challenges for Roma, Ashkali and Egyptian Women in terms of violence against women and girls?

Although we’ve seen improvements in recent years, it is common for many women in Kosovo, especially in Roma Ashkali Egyptian communities, to accept violence from men as a normal form of social interaction between genders. Generally, being controlled by men is seen as something that women are expected to accept. Early and forced marriages in particular, disproportionately affect Roma, Ashkali and Egyptian girls. The interconnecting challenges related to education, health, cultural traditions and poverty remain a major barrier to women’s empowerment and ending violence against women and girls. While protection from domestic violence is a human right guaranteed under Kosovo Law and International Conventions, their application is currently ineffective.

Moreover, women and men often lack information about existing protection mechanisms and organizations working against domestic violence and gender-based violence in Kosovo – such as the police, advocacy groups for victims, social workers, shelters and helplines. Due to their low level of education, Roma, Ashkali and Egyptian women tend to lack the necessary qualifications and skills for employment. Their difficult economic situation hampers their empowerment and independence, exacerbating unequal power relations and domestic violence. In addition to gender discrimination, marginalization of Roma Ashkali Egyptian communities by the majority of the population is also a factor that indirectly contributes to violence against women.

What do you consider as a key priority for ending violence against Roma, Ashkali and Egyptian women and girls?

Preventing early marriage, gender discrimination and domestic violence, and their consequences for families and children, is a key priority for ending violence against Roma, Ashkali and Egyptian women. In addition, information about the available mechanisms to protect and support victims and prosecute perpetrators needs to be widely publicized. For this reason, the network also includes young boys and men in its awareness-raising campaigns. It is very important to work closely with parents, girls, boys and relevant education authorities, especially when addressing the high rate of school drop-outs and early marriages.

Your organization has been selected to build the capacity of marginalized women’s groups to advocate for the implementation of laws and policies to end discrimination and violence against women and girls. How do you plan to implement this project?

We have been supported by the Kosovo Gender Study Center and UN Women for several years. Since 2007, the network functions as a stand-alone organization and is one of the few ones that has been continuously working with community representatives to increase awareness of protection for women against all forms of violence, and prevention and elimination of violence against women and domestic violence. NRAEWOK is committed to educating women, as well as local and central authorities, about new legal instruments such as the Istanbul Convention. Moreover, we will work closely with NGO members to strengthen their voices, in support of the implementation of laws and policies in line with the Convention on the Elimination of All Forms of Discrimination against Women (CEDAW) and the Istanbul Convention.

An important part of the regional programme is a focus on changing harmful gender stereotypes to end discrimination and violence against women. How can we make this happen and what would be your role in this?

We know that traditions and attitudes cannot be changed overnight. It takes time and intense work at all levels, starting with central government, through to local authorities and communities. More severe penalties alone probably won’t solve the problem of early marriages. Instead, we need to work closely with families and, most of all, support the efforts of Roma Ashkali Egyptian leaders to bring change to their local communities.

Therefore, our approach combines capacity assessments and capacity-building trainings with Roma, Ashkali and Egyptian civil society organizations, and women’s organizations and networks, as well as awareness-raising sessions and campaigns to advocate for the implementation of policies and laws against early marriage and all forms of gender discrimination – in line with CEDAW and the Istanbul Convention. In addition, our organization will provide support and assistance to local and central government to effectively reduce early marriages.

Related News
27/09/2022
Documentary and Short Film Festival Celebrates the Power of Women in Kosovo
08/06/2015
Building businesses, and inclusive peace, in Kosovo
02/02/2023
Interview: “Social norms are the hardest to change when it comes to sexual violence”
23/01/2023
In the words of Lindita Kozmaqi Piraj: “Domestic violence is no longer a taboo topic in our town”
23/12/2022
New protocol for responding to sexual violence cases launched in Kosovo
END_OF_DOCUMENT_TOKEN_TO_BE_REPLACED