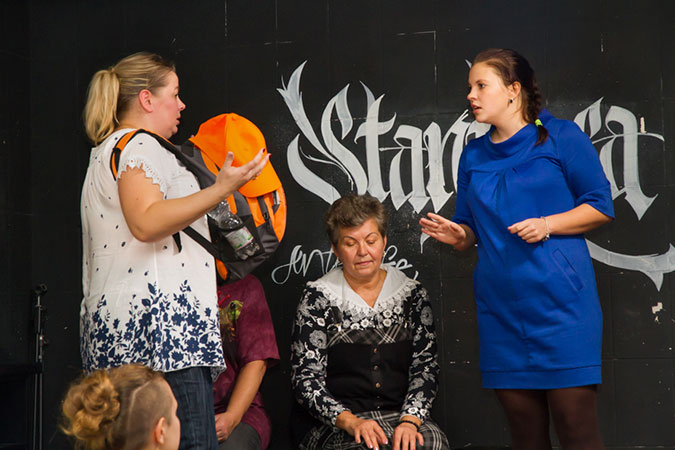 Olesya Arkhypova left her home in the Donetsk region in eastern Ukraine shortly after the armed conflict broke out in May, 2014. A month later, her father died in the conflict. As the government forces lost control over her home town Makiivka, Arkhypova quit her job at an advertisement company and set out to find a safer place to live. She was several weeks pregnant at the time.

Arkhypova travelled through western Ukraine and decided to start a new life in the city of Ivano-Frankivsk, where she gave birth to her son. Raising a new-born on her own, with limited access to social services as a displaced woman, was not easy. Cultural norms in the community dictated that she should stay home and care for her son, and Arkhypova felt increasingly isolated. “I was being constantly told that I shouldn’t work with a young child at home. But I wanted to break the stereotype and prove that it’s possible to be a working mother,” shares Arkhypova. 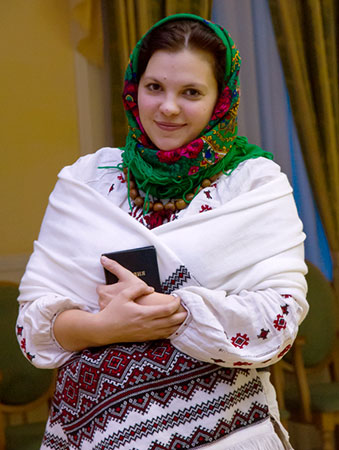 Arkhypova’s life took a dramatic turn in the autumn of 2016, when she participated in an interactive theatre experience organized by UN Women, in partnership with the “Theatre for Dialogue,” a local non-profit organization based in Kyiv. Using the Forum Theatre approach, also called ‘Theatre of the Oppressed’, the initiative empowers internally displaced women like Arkhypova by engaging them, along with women from the host communities, in live theatre. Together with local activists, the women depict and seek solutions to everyday challenges they face in host communities.

The armed conflict in eastern Ukraine, entering its fourth year now, has brought profound insecurity and deepened the already existing gender inequalities in the country. In April 2014, anti-government armed groups seized some parts of Donetsk and Luhansk regions in eastern Ukraine, prompting the Government to launch an anti-terrorist operation. The fighting continues to date, despite various ceasefire agreements, and women and children make up 63 percent of the 1.7 million internally dispaced persons (IDPs) from conflict-affected areas [1]. Left without adequate social support services in the host communities, women shoulder the lion’s share of care work, looking after the children, elderly and the disabled.

“Our ultimate goal is to increase the self-esteem of displaced women and to unleash their potential so that they don’t perceive themselves as victims, but as valuable contributors to the recovery and development processes in their new communities,” says Anastasia Divinskaya, UN Women Ukraine Country Programme Manager.

Since 2016, more than 60 women IDPs and women from host communities have participated in the Forum Theatre workshops and performances in the eastern, western and central parts of Ukraine. Through their performance, participants identify the barriers impeding their social integration and access to opportunities, resources and decision-making in new communities. They collectively suggest realistic solutions to overcoming these obstacles.

“Once I played the role of a woman who does not want to have IDPs in her city,” recalls Olesya Arkhypova. “Suddenly I felt her fears, concerns and her trauma. The experience is priceless when you want to build a dialogue between IDPs and local communities,” she adds.

Arkhypova is now running a non-governmental organization (NGO) that works to eliminate prevailing stereotypes about IDPs in local communities. “Our NGO organizes a number of different initiatives to empower young displaced mothers and their children,” she shares.

“Interactive theatre reveals the hidden fears and needs, which are hard to discover through other activities,” says Nino Khodorivsko, a co-founder of Theatre for Dialogue.

As part of this initiative, funded by the Government of Australia in 2016 and the Government of Sweden in 2017, UN Women also ensured that displaced women’s voices are heard and integrated into national strategies for recovery and peace. In November 2016, displaced women from seven regions, who had participated in Forum Theatre performances, directly voiced their needs and concerns to the Minister of Temporarily Occupied Territories and Internally Displaced Women. Their recommendations were included in the State Programme on Recovery and Peacebuilding, which is expected to streamline the government’s planning and budgeting for recovery, reconciliation and peace-building, as well as for social services, economic and infrastructure development for the conflict-affected population.

Related News
20/05/2022
Meet Yaroslav, a young Ukrainian refugee with disabilities who dreams of becoming a DJ
19/05/2022
Interview: “The war in Ukraine may be changing the women’s movement, but it’s not stopping it”
04/05/2022
Ukraine: New UN Women and CARE report highlights disproportionate impact of the war on women and minorities
20/04/2022
Stronger together: The refugees finding peace and humanity in Moldova
14/04/2022
From Where I Stand: Svetlana Babaș, Ukrainian Roma refugee
END_OF_DOCUMENT_TOKEN_TO_BE_REPLACED