Women survivors of domestic violence might be breathing new life into their organic garden but the green goods empower back. 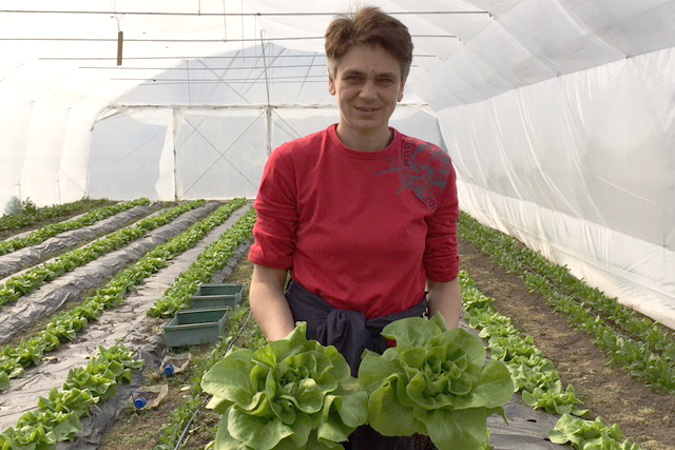 With the first days of spring and the sunlight, “Good Garden”, a social enterprise for growing organic vegetables, has turned into a green oasis packed with organically grown lettuce, spinach and onion. Marigold, as plant protector, is planted on all four sides of the greenhouse to prevent harmful insects reach the plants, while basil, as a plant-friend is everywhere to speed up the growing process.

Proudly watching it, Dalida Macura, coordinator of “Good Garden” admits that there is a reason behind the beauty of this green paradise. “I am singing them [plants] songs, but I cannot reveal which ones. That is our [plants’ and her] little secret I have to keep.” 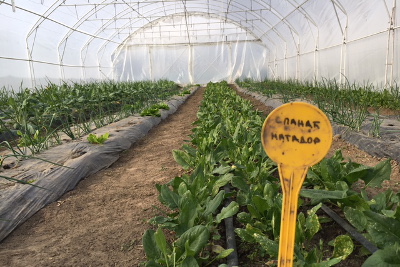 Organic spinach in “Good Garden” is not like any other other as it has been grown with love. Photo: UN Women/Bojana Barlovac

This is one of three greenhouses, which comprise “Good Garden” in the northern Serbian town of Sombor. It is established within the SHE-Empowerment (ONAsnazivanje) project of Belgrade-based B92 Fund and supported by UN Trust Fund to End Violence Against Women. Kicked off in 2015, the main idea of the project is to contribute in an innovative way to women empowerment through economic independence, but also to promote a healthy lifestyle through production and consumption of organic vegetables. The income from greenhouses goes to the Sombor safe house and activities aimed at their beneficiaries’ economic independence.

Therefore, “Good Garden” is not only a social enterprise for growing organic vegetables but also a training center for organic production for women survivors of domestic violence who wish to get involved in this sustainable farming method.

According to Dalida, women survivors of domestic violence and beneficiaries of the Sombor safe house often need to recuperate before they regain enough strength to help in the garden. “Usually only those who are staying longer in the safe house join in,” she noted while being the only one fully devoted to the greenhouses every day. The main functions of the women’s safe house are to provide safe shelter and transitional living services to battered women and their dependent children and to empower women to make informed choices about their future. 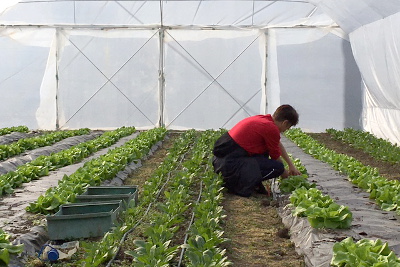 Dalida Macura has told us a little secret — we need to sing to the plants to help them grow. Photo: UN Women/Bojana Barlovac

In addition, the women survivors are able to part in training by leading experts in organic production in the country that are frequently held in the three greenhouses. This is where they can get basic knowledge on organic production and learn to develop their own business plans. The rationale behind this was that almost every house in this area has a garden and women are already growing something, but earning something out of it would be a major success and their path to economic independence.

As described in Wim Wenders’ and Juliano Ribeiro Salgado’s awarded film The Salt of the Earth, growing a garden has a healing effect, Dalida explained: “When you plant a little seed in the soil and it grows into a huge plant which gives you 10 kg of tomatoes, that is an extraordinary feeling. Plants need a lot of love and attention, and you have to invest a lot of energy, and nature always heals and returns with good.”

All these efforts led by Dalida Macura resulted in two innovation awards. Good Garden social enterprise won a Smart Academy award at Serbia’s Regional Forum of Social Innovations in April 2016 for its sustainability, effectiveness, innovation and its good cause. 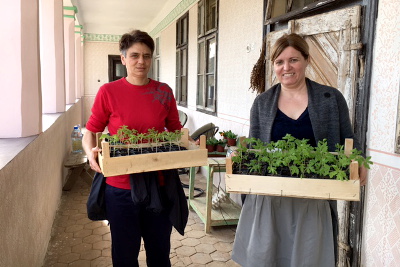 Dalida and Ljiljana are happy to say that new seeds and plants are coming to “Good Garden”. Photo: UN Women/Bojana Barlovac

Challenges, however, remain. Ljiljana Gusic, president of local Breathe Life women’s association, whose Dalida is a member, says that long-term sustainability is still an issue of concern: “Women are working on a voluntary basis which cannot last forever and second is the product placement. People in this area still have prejudice when they see something small, stunted with bugs and worms and they believe the produce is spoiled,” Ljiljana said referring to their organic products are not popular among buyers as they do not see safety in worms.

So far, they are sold in wet markets and at some local stores. According to Ljiljana, the main solution would be to have their organic products shipped to big cities like Belgrade and Novi Sad where awareness on organic vegetables already exists. In a bid to be self-sustainable, “Good Garden” would need to have at least four greenhouses engaged and paid for their work.

Looking ahead, Dalida Macura was pointing to healthy seeds of tomato, cherry tomato and paprika that are next in line for planting in the coming weeks, once lettuce, spinach and onions are gone.

Related News
14/10/2022
Interview: “Rural women must be aware of their value and fight every day, in various ways, in this male-dominated world”
06/04/2020
In a Serbian town, survivors of domestic violence are sewing face masks for those in the front line of COVID-19 response
29/07/2019
In the words of Milica Gudović: “Economic empowerment is crucial, not only for survivors, but for any woman”
12/09/2018
Press release: Her Royal Highness Princess Eugenie of York visits UN Trust Fund grantees in Serbia
29/05/2017
Press Release: UN Women and the European Union launch initiative to focus on ending violence against women in Serbia
END_OF_DOCUMENT_TOKEN_TO_BE_REPLACED