On 8 March 2017 and during the commemoration week of International Women's Day, countries across the Europe and Central Asia region have joined the global call for Gender Equality: Planet 50-50 by 2030 by ensuring that the world of work works for all women. UN Women is organizing a series of diverse, high-profile events in the region, where ordinary citizens, government officials, activists, students, security personnel, scholars and stock exchange officials are among those who commit to “Stepping It Up for Gender Equality.”

Albanians celebrate International Women’s Day with a range of activities The Municipality of Tirana, the only municipality in Albania where women have the majority in the local council, singed the European Charter for Equality of Women and Men in Local Life. The commemoration event also discussed key issues impacting women in Albania, such as women’s right to property. Youth from different faith communities were also engaged through trainings focused on gender equality and women’s rights. They came up with a unified message: “A healthy society promotes, encourages and believes in a woman’s empowerment and her contribution. A handicraft fair by women and girls was organized in the center of the city of Durres, aiming to raise funds for victims of domestic violence and gender based violence. Programme of activities can be found here. Explore more photos on Flickr. In Georgia, UN Women in partnership with the Noosfera Foundation hosted a documentary film festival “Woman in Focus” from 8 to 10 March for International Women’s Day. This year, audiences have the opportunity to see films directed by Czech, Dutch, French, Georgian and Iranian female and male cinematographers. Read more. The performance "The Invisible Women" by the feminist initiative "Fight Like a Woman". Photo: UN Women/Mirjana Nedeva

UN Women Skopje Office supported the performance "The Invisible Women" by the feminist initiative "Fight Like a Woman" ("Бори се женски"). The goal of the performance was to trigger unpaid care work, gender pay gap and minimal wage. The activists/members of the feminist initiative "Fight Like a Woman" ("Бори се женски") addressed these issues by performing home chores and seamstresses labour in one of the busiest and oldest shopping malls in Skopje, the City Shopping Mall (GTC) and interacting with passers-by. Latest data on employment, gender pay gap, free-time use of women and men were presented on visuals during the performance. The big version of the well known 5MKD coin with the missing 18 per cent (gender pay gap in the country) attracted great interest among the passengers. Explore more photos on Flickr.

Women’s Rights Nights have brought together art exhibitions, documentary film screening, thematic discussions, creative workshops and performances related to the role of women in times of crisis and the economic rights of women. This culmination of alternative cultural arts is under the patronage of the City of Skopje, supported by UN Women, in partnership with the Centre for Research and Policy Making and Cc Cyril and Methodius University, Institute for Gender Studies and University for Audio-visual Arts ESRA. Read more. 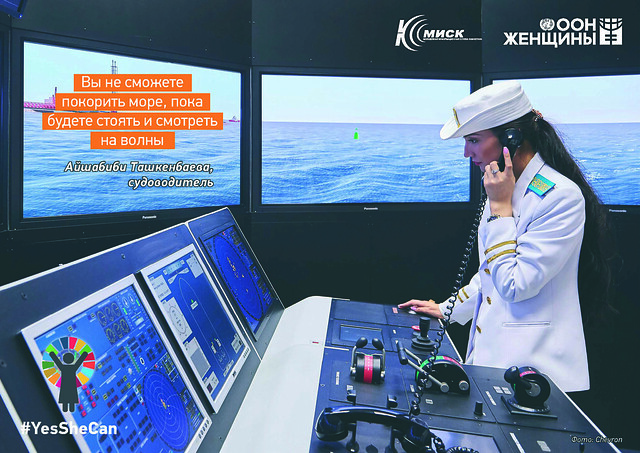 A teleconference connecting 70 young people from five cities of Kazakhstan to discuss economic empowerment of socially-vulnerable women (women with disabilities, young rural women, women living with HIV, former detainees) took place in Almaty on 6 March. Participants had a dialogue on the Government’s accountability to safeguard and promote the rights of the vulnerable groups of people.

On International Women’s Day, two non-governmental organizations working to support former detainees and to advocate for the right of women living with HIV decided to start their joint-advocacy movement for removing criminal record certificate from the mandatory list of employees.

A myriad of activities across Kyrgyzstan engages students and communities Leading up to International Women’s Day, on 3 March 2017 a National Women's Forum of Kyrgyzstan titled "For equal rights and opportunities: dialogue of generations" was held in Bishkek in a spirit to unite the efforts of the government, parliament, international community and civil society to protect the rights of women and girls.

On the same in Bishkek, UN Women Kyrgyzstan along with UNDP, The British Embassy to the Kyrgyzstan, Women Support Center, and IDEA in Central Asia organized quizzes and adventure games on topics of gender equality and women’s empowerment with around 700 students from leading universities of Kyrgyzstan. Among the winners were the peer-educators and young gender advocates who joined UN Women’s My Safe and Peaceful School project.

At another location in Bishkek, newly elected women-deputies of local councils, women-leaders, active gender-advocates of Kyrgyzstan gathered at the monument of Urkuya Salieva to advocate for women's political participation, sexual and reproductive health, violence against women and girls, women's economic empowerment, protection of the rights of the socially vulnerable people. Urkuya Salieva was a Kyrgyz political leader and an advocate for women's rights. Explore more photos on Flickr. The UN organized an event entitled “Women at work: double burden” to discuss the inequalities women are faced with in their everyday life, especially in the field of waged labour and domestic work. In a bid to draw attention to women’s “double burden”, the Coordination Body for Gender Equality of the Republic of Serbia, the UN Country Team in Serbia, the EU Info Center and the EU Delegation to Serbia jointly organized a panel discussion in the EU Info Center. The opening remarks were given by Milana Rikanovic, Head of UN Women in Serbia, Branka Draskovic, Special Advisor to the Deputy Prime Minister and President of the Coordination Body for Gender Equality. Following a short movie, produced by UN Serbia, participants engaged in a lively debate. The event generated 34 reports in the national media. On International Women’s Day, UN Women, UN Global Compact, IFC and Borsa Istanbul (former Istanbul Stock Exchange) came together to organize an opening bell ceremony to highlight the importance of gender equality and women’s empowerment to sustainable development and business. The Minister of Family and Social Policies, Dr. Fatma Betül Sayan Kaya joined the bell ringing ceremony where 74 new companies that signed the Women’s Empowerment Principles (WEPs) were announced. The total number of WEPs signatories in Turkey has increased to 150 now making it the 2nd country in the world with the highest number of WEPs signatories. Read more. UN Women in Turkey, together with the UN Resident Coordinator’s Office in Turkey, and other UN agencies organized a Talk For Equality panel on 8 March where the UN Residential Coordinator, Irena Vojackova Sollorano and UNFPA Representative to Turkey, Karl Kulessa were the speakers on the subject of women's empowerment and gender equality. UN Women Turkey welcomed students from Uludag University in the UN House Building. They were given a presentation on UN Women activities in Turkey and learned about gender equality and women's empowerment. A panel discussion was organized at Dokuz Eylul University, Izmir where Gender Specialist, Zeliha Unaldi spoke on the panel. She represented UN Women-chaired UN Gender Result Group. UN agencies, Turkmen NGOs and community activists jointly organized an International Women’s Day event under the theme, “Planet 50:50 by 2030”. A panel discussion under the subject, “Gender-Oriented Objectives of Sustainable Development Goals (SDGs) and NGOs engagement in the implementation of SDGs” provided a platform for an open discussion among participants. UN Women led the discussion on gender aspects of the Global Goals and facilitated a workshop to share experiences and plans of NGOs in their implementation of the new SDGs. Through the practical exercises civil society organizations found gender linkages between their activities and the Global Goals 1, 3, 4, 5, 6, 8, 10, 16 on reducing poverty, education, health, inclusive societies and access to justice, economic growth and employment. Thirty-two representatives from local NGOs, Y-Peer young leaders network, community consultants working with vulnerable groups of women and other international discussed how their engagement can promote gender equality and women’s empowerment and highlighted the importance of active role of women in NGOs activities.