UN and civil society in Ukraine discuss how to integrate gender equality and women's rights into humanitarian action at meeting organized by UN Women. 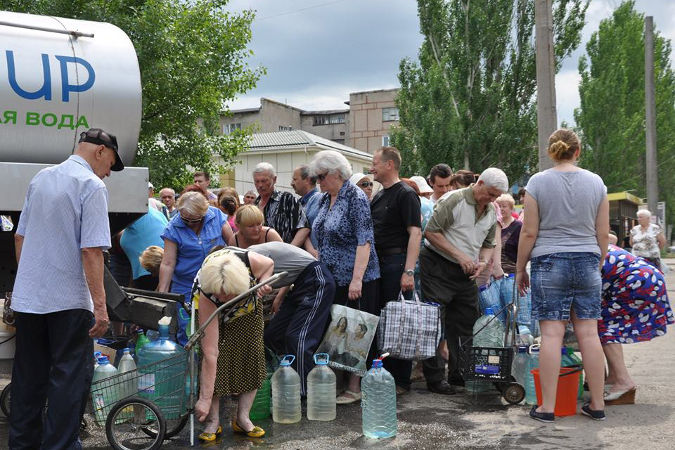 6 October 2015, Kiev (Ukraine) – Civil society including non-traditional UN partners provided information and feedback to the UN humanitarian system today about the most pressing needs of people – women, men, girls, boys, the elderly and people with disabilities – affected by the conflict in eastern Ukraine.

The half-day consultation saw a rich exchange of ideas and produced recommendations on ways to integrate gender equality and women's rights into humanitarian action as the UN begins planning humanitarian assistance for 2016. 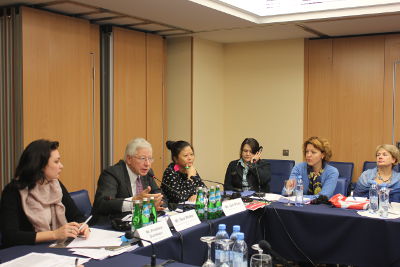 “This is the first event to kick start humanitarian planning for 2016. That we start this process by discussing gender equality issues is a great testament of the importance assigned to this issue by the UN,” said Mr. Neal Walker, UN Resident Coordinator and Humanitarian Coordinator in Ukraine, at the opening.

That conflict has increased insecurity and violence throughout Ukraine. Combined with austerity measures adopted in March 2014, it has deepened gender inequalities and disproportionately affected women, who make up over 63 per cent of the country’s estimated 1.4 million internally displaced persons (IDPs).

The economic consequences of the conflict and the protection risks to women and girls in a militarized environment have manifested themselves in many ways, including concerns about sex work and risks associated with survival sex. A lack of access to social services and childcare and already strained host communities’ resources place additional care burdens on IDP women. 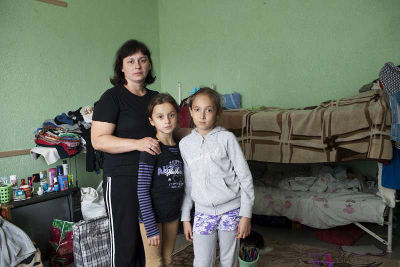 A Ukrainian mother poses with her daughter and a young friend in the room where she lives with her family in a centre for displaced people in Slavyansk. Most of the people are from the Luhansk and Donetsk regions. Photo: UNHCR

“Internally displaced women provide care for children, the disabled and elderly family members,” said Ms. Olena Petrenko, representative of the Ukrainian NGO Donbas SOS. “Lack of access to income support, child care and kindergarten limits women’s employment, leaving them with insignificant amounts of social benefits – if they are lucky to receive them at all.“

“A lack of shelter support leaves people vulnerable and at risk of going back into conflict zones, where they face shelling, injuries and limited humanitarian assistance,” said Ms. Lesia Lytvynova, Coordinator of IDP Support Center (Florovsky 9/11 project), a volunteer organisation that attended the workshop.

Discussions also centred on the specific needs of men, in particular young men, who may miss out on assistance as they do not fit any criteria for humanitarian assistance. 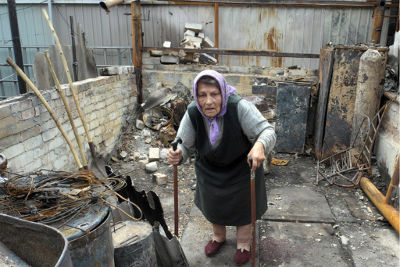 A resident of the Artema suburb of Sloviansk, Ukraine, in the rubble of what used to be her summer kitchen, in July 2014. Photo: UNHCR/Iva Zimova

After examining the impact of the crisis on different groups living in conflict affected areas – women, men, the disabled, the elderly, ethnic and other minorities – the participants proposed responses based on each group’s needs in humanitarian areas, such as protection, shelter, food, livelihoods, recover, and education, as well as health, water and sanitation.

By engaging non-traditional partners and allowing a wider participation of civil society, particularly by women’s organisations, the workshop broadened the discussion of the gender aspects of Ukraine’s humanitarian crisis. This gave UN participants a better understanding of the different impacts of the crisis on women, men and children and helped identify critical issues to be addressed in the 2016 humanitarian planning process.

Related News
04/05/2022
Ukraine: New UN Women and CARE report highlights disproportionate impact of the war on women and minorities
12/04/2022
Executive Director meets with Ukrainian refugees and Moldovans leading the humanitarian response
11/04/2022
Speech: Women’s involvement is both a right and an opportunity for better outcomes
11/04/2022
Press Release: In Moldova, UN Women Executive Director commits to advancing the empowerment and resilience of Moldovan and refugee women
09/12/2021
In the words of Rahime Hasan: “We should not overlook the place of men in the fight against violence”
END_OF_DOCUMENT_TOKEN_TO_BE_REPLACED