The legacy of conflict-related violence endures long after a peace agreement is signed. In too many cases, violence and insecurity continue or even increase for women, facilitated by large-scale impunity, the absence of effective justice systems and an unreformed security sector. Re-establishing the rule of law is the foundation for women’s security, protection of rights, and, ultimately, an equitable peace.

On 18 October 2013, the UN Security Council will convene an Open Debate on women and peace and security with a focus on “Women, Rule of Law and Transitional Justice”.

Held yearly, the Open Debate marks an opportunity to reflect on the progress made, assess gaps, and to accelerate action on the implementation of the historic Security Council resolution 1325 (2000) and related commitments and guiding documents on women and peace and security, one of UN Women’s priority areas of work.

The ground-breaking Security Council resolution 1325, passed in the year 2000, was the first to link women’s experiences of conflict to the international peace and security agenda, focusing attention on the disproportionate impact of conflict on women, and calling for women’s engagement in conflict resolution and peacebuilding. 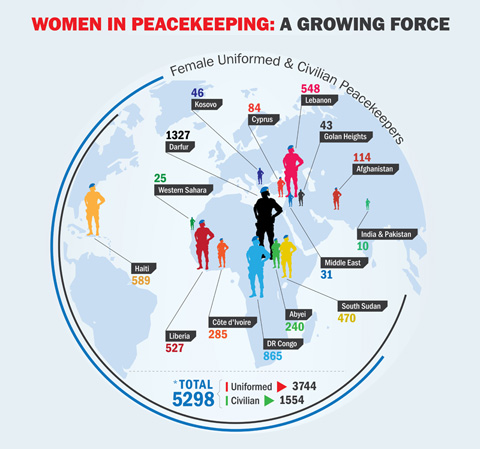 Since its passage, changes in peacemaking, peacekeeping and peacebuilding are clear. For instance, in 1993, women made up only one per cent of deployed uniformed personnel, while by 2012, out of approximately 125,000 peacekeepers, women comprised three per cent of military personnel and 10 per cent of police personnel in UN Peacekeeping missions.

Yet, many gaps remain in increasing this number, as well as in getting more women to be part of peace negotiations, or ensuring their safety and economic recovery once peace accords are signed.

The new report of the UN Secretary-General (S/2013/525) provides an overview of progress since last year in implementing resolution 1325 across four action areas: prevention, participation, protection and peacebuilding and recovery. It also proposes actions for the Council’s consideration to accelerate progress and to prepare for the 2015 high-level review of the implementation of resolution 1325.

In collaboration with partners, UN Women is currently supporting implementation of women, peace and security commitments in over 35 countries. This includes support for strengthening women’s peace coalitions and to help prepare them for engagement in peace processes; work with peacekeepers to help detect and prevent conflict-related sexual violence; support to build justice and security institutions that protect women and girls from violence and discrimination; and initiatives to promote public services that respond to women’s needs, ensure women’s access to economic opportunities, and build women’s engagement in public decision-making at national and local levels.

See our facts and figures on women’s role in peace, security and justice »

Preventing and ending violence against women is at the heart of UN Women’s mission: John Hendra

Watch the archived webcast of Phumzile Mlambo-Ngcuka's statement at the Open Debate:

A range of side events and activities will be organized by Member States, regional organizations, civil society and United Nations entities in connection to the Open Debate to provide opportunities for stakeholders across regions to share experiences, good practices and lessons learned on the implementation of commitments on women and peace and security.
Calendar of Side Events » 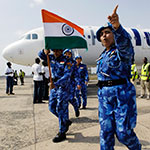 In India, special training and all-women peacekeeping units confront sexual violence
Officers from 16 countries, including India, Cyprus, Tajikistan and Ghana, received training on how to respond to sexual violence in conflict areas. Over the past two years, UN Women India has facilitated more than 20 training sessions on gender and sexual or gender-based violence prevention and response. 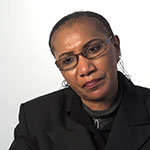 Girls receive a visit from a different man every night, a 'new husband': Saran Keïta Diakité
A lawyer and President of the Malian branch of the NGO Working Group on Women Peace and Security, speaks in her own words about the atrocities occurring in her country and her work to assist survivors of violence, provide access to justice, and ensure women have a say in peace negotiations. 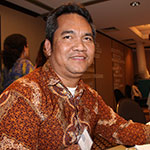 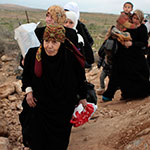 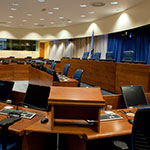 Protecting witnesses of wartime rape in Bosnia and Herzegovina
UN Women is working with partners to monitor wartime rape trials, document the treatment of witnesses by judges and prosecutors, and provide training and technical support to improve prosecutions in a country with as many as 40,000 survivors of sexual violence. 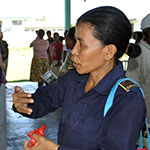 Police and community-based networks in Timor-Leste are working to prevent and respond to sexual and gender-based violence by helping survivors get counseling and judicial assistance. They also raise awareness of the domestic violence law. 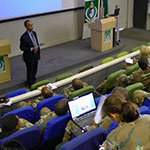 South Sudan became the world’s newest country on 9 July 2011 after decades of civil war and conflict. Working with the Government and other national partners, UN Women is engaging women in peace and security, supporting their economic empowerment and bolstering governance and leadership. Take a look at the impact these efforts are already having in Mundri and Gangura, two communities in Western Equatoria state near the border with the Democratic Republic of the Congo.

Side by side: Women, Peace and Security
Jointly developed by the Australian Civil-Military Centre and UN Women to highlight the role of women in peace and security worldwide, “Side by Side: Women, Peace and Security” explores how the international community has met and can meet its commitments regarding women and conflict. The 30-minute video features an introduction by UN Secretary-General Ban Ki-moon, as well as interviews with Ms. Bachelet and other United Nations personnel, among them peacekeepers, mediators, humanitarian actors, policy-makers and survivors of conflict.

Join the online conversation about the UN Security Council Open Debate on Women and Peace and Security! Use the hashtag #womenpeacesecurity on Twitter to share your thoughts. Images for sharing on social media can be downloaded here.

The #UN Security Council #UNSC is having an Open Debate on #womenpeacesecurity on 18Oct!Watch live,10amET

Re-establishing #ruleoflaw after conflict is foundation for equitable peace #womenpeacesecurity

The UN Security Council will convene on 18 October an Open Debate on women and peace and security with a focus on women, rule of law and transitional justice! The legacy of conflict-related violence endures long after a peace agreement is signed. In too many cases, violence and insecurity continue or even increase for women, facilitated by large-scale impunity, the absence of effective justice systems and an unreformed security sector. Re-establishing the rule of law is the foundation for women’s security, protection of rights, and, ultimately, an equitable peace.

In 2010, on the tenth anniversary of UNSCR 1325, the UN organized the first series of Open Day events on women, peace and security. These Open Days, held in conflict-affected areas, enable direct dialogue between women civil society leaders, activists and senior UN representatives and provide space for women’s leaders to articulate their priorities and concerns to decision-makers. 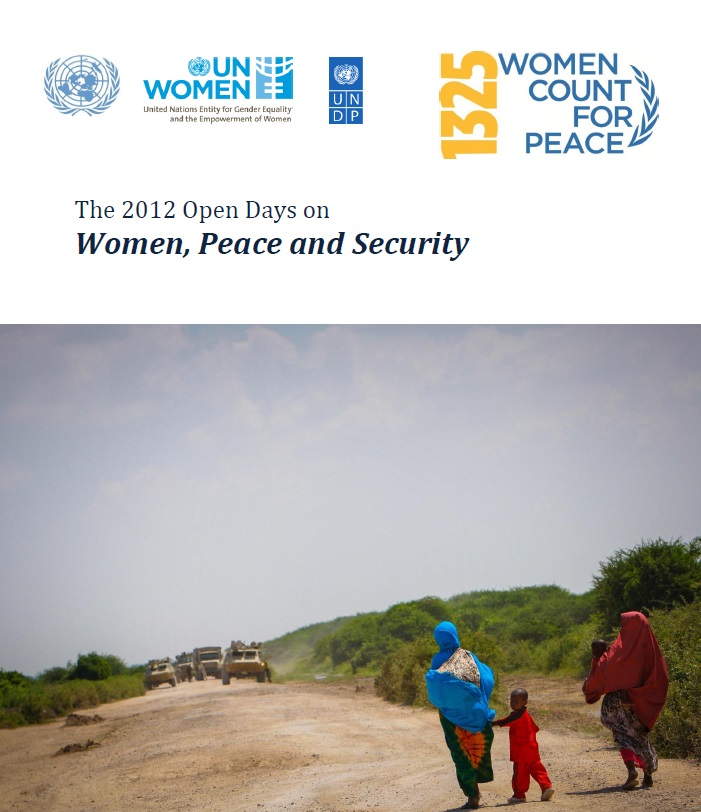 In 2012, a total of 25 Open Day events were organized between July and October 2012, including 22 country events and three regional events, held in West Africa, Central Asia and by the African Union. The findings and recommendations put forward in these meetings are summarized in the 2012 Open Days report.

See our 2012 compilation for the Open Debate on Women, Peace and Security, held 30 November 2012, with a focus on “the Role of Women’s Civil Society Organizations in Contributing to the Prevention and Resolution of Armed Conflict and Peacebuilding.”