Welcome to Equiterra, where gender equality is real

BREAKING NEWS: We found a country that has achieved gender equality!

In Equiterra all people have equal rights and opportunities, regardless of their gender. Women and girls feel safe when walking at night. They get paid equally as men, for work of equal value.

Men and women share chores and care duties at home, and they can access high quality care at affordable rates. Isn’t that fabulous!

No one is talking about ‘at least 30 per cent’ quota for women in political leadership in Equiterra anymore—men and women are equally represented in political offices, corporate boardrooms and factory floors. Women have equal say in decisions that affect their lives, their bodies, their policies, and their environment. Girls are as valued as boys are, and people of all gender and sexuality feel safe and equal.

This is what gender equality looks like. Join us for a tour of its bustling capital! 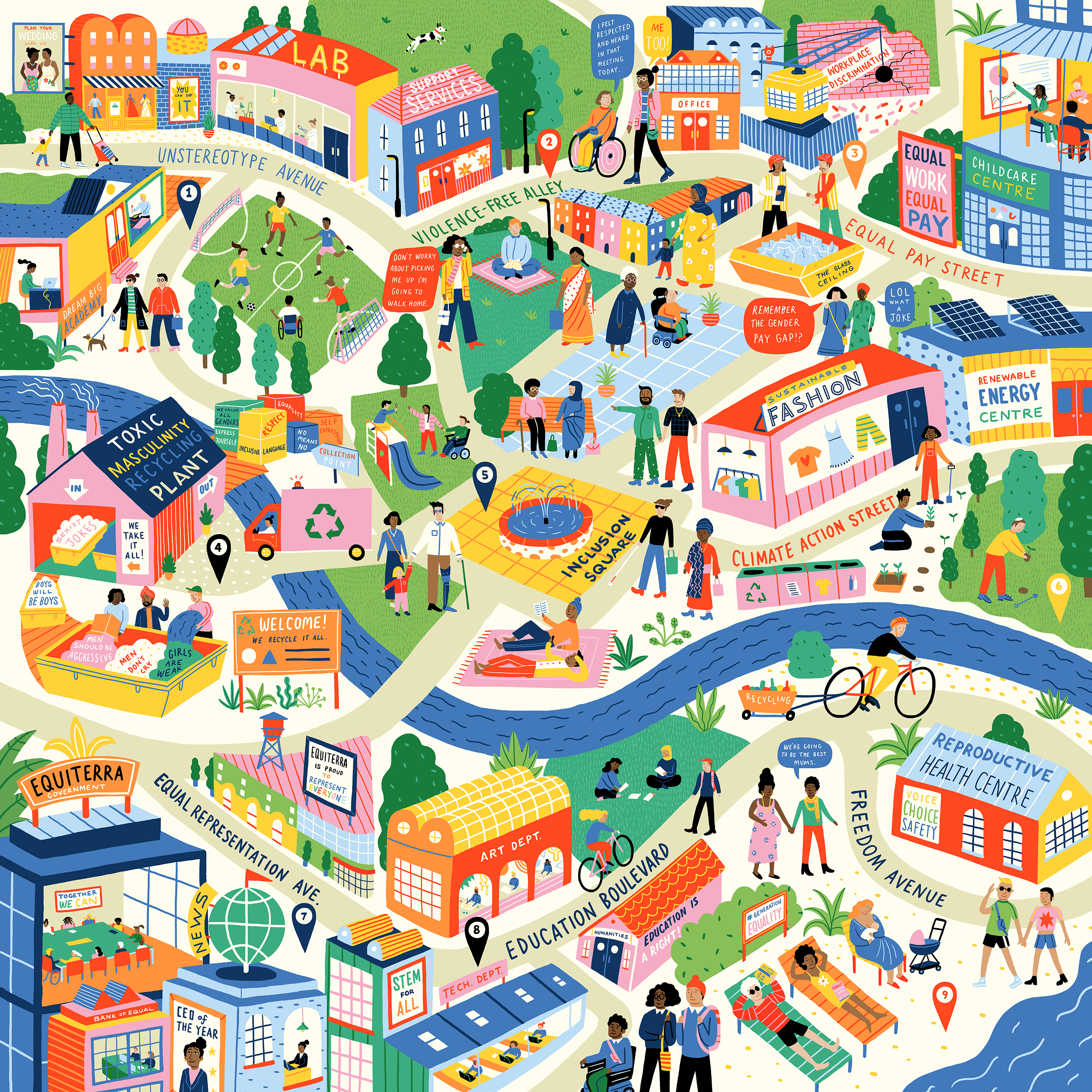 Equiterra exists only in our imagination, but it’s a place that we can all aspire to build.

To date, no country in the world has achieved gender equality.

Twenty-five years ago, 193 countries came together at the Fourth World Conference on Women and promised to take measures that guaranteed gender equality. They signed on to the most comprehensive global roadmap to destination “gender equality”, the Beijing Platform for Action. There has been a lot of progress since then, but many of the promises are yet to be fulfilled. 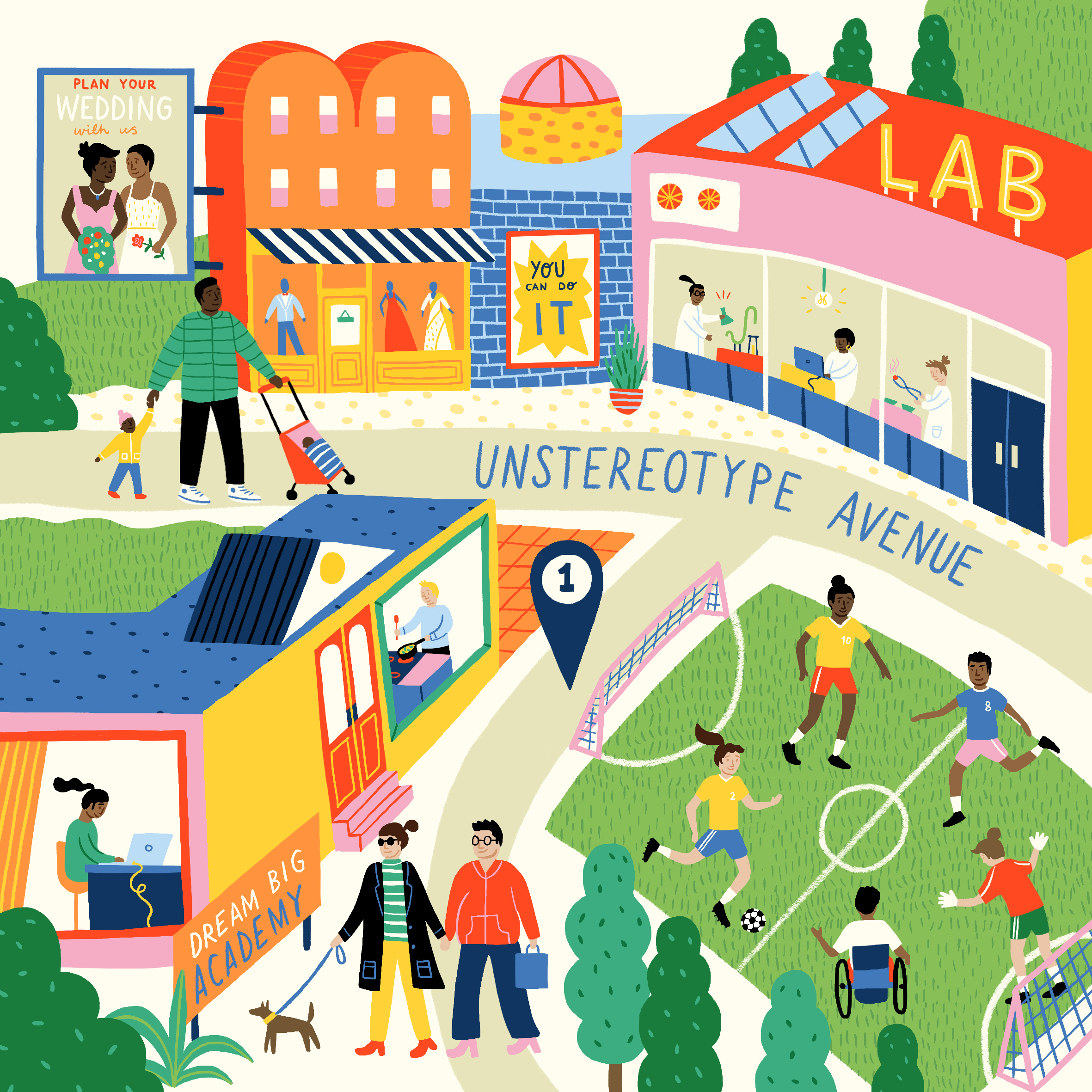 If you ask a little girl walking along Unstereotype Avenue what she wants to be when she grows up, she could tell you I can be anything: a scientist, an engineer, a supreme court judge, an Olympic champion, an artist or astronaut—not even the sky is the limit when it comes to dreaming big.

The word stereotype has lost its meaning in this country. People root for the girl who wants to be a professional football player, not question her capabilities. Teachers encourage all of their students to choose STEM fields instead of assuming that girls wouldn’t be interested in them.

In Equiterra, diversity is celebrated, not feared, and a culture of acceptance dominates the hearts and minds.

In Violence-Free Alley, two women are walking along, discussing their days at work.

“They were respectful, and I was fully heard in that meeting today,” says one.

They don’t face persistent sexual harassment at work or when walking on the streets. They aren’t taught to walk with their keys between their fingers in case they are attacked or worry about being judged for the clothes they wear. There is no such thing as femicide, women are valued and respected here.

Domestic violence is a rare occurrence, because there are strong laws against it and services to support victims. Since gender equality is the norm, the power dynamics between intimate partners are not oppressive or toxic.

On Equal Pay Street (and everywhere else in Equiterra) there’s no question that women and men are being paid equally for work of equal value. There are no systemic barriers that hold women back and since they are encouraged to pursue careers across all sectors, there is no ‘women’s work’ or ‘men’s work’. Women stay in the pipeline and become leaders across industries.

With care work and household responsibilities shared equally, women don’t have to worry about their family choices interfering with the way they are perceived at work and limiting their ability to progress.

There’s unified parental leave across all sectors. Fathers take parental leave as mothers do and enjoy caring for their children. Employers allow flexible arrangements for those who have care responsibilities.

Also, in Equiterra minimum wages are set to provide decent income and there is quality and affordable care available for those who need it. As a result, men and women can equally contribute towards a thriving economy and children are happy and healthy.

Just like in every civilization, citizens of Equiterra are affected by the human history, including patriarchal ideas of gender roles and what it means to be a boy or a girl, a woman or a man, a transgender person or a gender-nonconforming person.

Instead of conforming to these historical gendered stereotypes that have restricted men and women for generations, people of Equiterra question toxic masculinity. In the Toxic Masculinity Recycling Plant, through innovative dialogues and learning, toxic behaviours are transformed into attitudes that perpetuate gender equality.

For instance, expectations such as, men and boys shouldn’t show emotion, or that they are naturally aggressive, have been transformed into healthier attitudes that respect every person’s right to live as their true self, with their full range of emotions, dreams and capabilities. Binary definitions of gender turn into a spectrum of gender identity and expression.

Freed from oppressive gender roles, people of Equiterra are not held back by dominant forms of masculinity, and they are happier and mentally healthier than any other society.

Two men stand together, watching their son play on the jungle gym. He’s made friends with a child in a wheelchair, and another little girl. They’re playing pretend: they’re all knights guarding their castle against imaginary enemies.

Inclusion square is where families and friends meet to relax and spend time outside. Anyone and everyone can enjoy the space: It’s accessible for those living with disability; people don’t feel judged or discriminated against on the basis of their sexual orientation, race, religion or socioeconomic standing. Here, everyone feels welcome and included. Here, everyone is safe and able to enjoy themselves.

In Equiterra there are no deniers of climate change. Everyone does their part to protect the earth and takes action to stop rising temperatures and the destruction of resources. Along Climate Action Street, you’ll see recycling and compost bins. There is sustainable and safe public transport that reduces the need for everyone to own and use cars. Sustainable, recycled fashion is the rage here, limiting waste.

And, you see women leading the charge, in equal footing with men. Women leaders in business and government have been key actors in making the policies that are protecting the environment. With the inclusion of women’s experiences, talent and perspectives, Equiterra has found new ways of sustainably reducing the country’s carbon footprint and food waste.

Along Equal Representation Avenue are some of the most important institutions: government headquarters, leading businesses, and a major newspaper office and TV station.

They all have gender balanced leadership. The Parliament has equal representation of women and men, and the boardrooms show women and men of diversity working towards common goals. In the media, you don’t see harmful stereotypes and sexism.

In Equiterra, education is a top priority. On the school grounds, you see young girls and boys reading history books that include stories of both women and men who have shaped their communities and culture.

Children attend school without worrying about their safety, and girls and boys share chores at home. They have access to all the books and technology they need to learn and grow.

Girls are taught science and math without the presumption that it’s not for them. Boys learn humanities and art and learn the importance of gender equality. There’s no such thing as child marriage that pulls girls out of school to become brides. 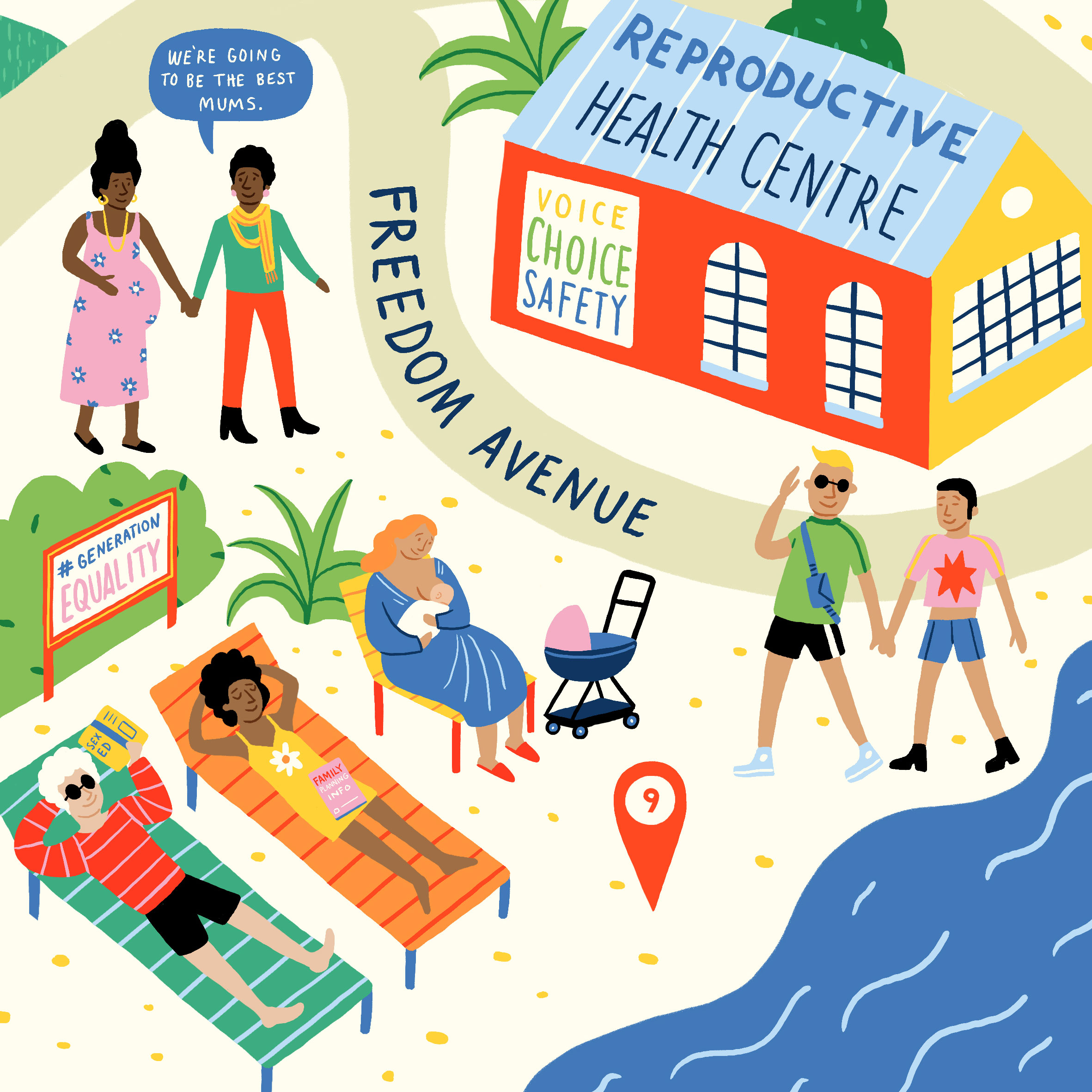 Freedom is one of the guiding principles of life in Equiterra. Freedom of expression and movement, freedom to choose your identity, and freedom to choose how many children you have and to have control over your own body.

Along Freedom Avenue are the resources to guide some of these choices. Here, you will find access to safe, voluntary family planning information. Comprehensive education about sexuality and sexual and reproductive health and rights is part of the school curricula and available to everyone.

In Equiterra since everyone is empowered to access such information and services, couples and individuals can plan if and when and how many children they want to have, women can complete their education, pursue their careers and enjoy better health. They are leaders in shaping health policies and budgets that affect their lives.

Every woman or girl, whether young or old, can get HIV testing and treatment without stigma or discrimination. In Equite rra, public health systems are fully funded and staffed, user-fees are a thing of the past.

Now that you have seen Equiterra join #GenerationEquality to make this a reality in your family, community and country