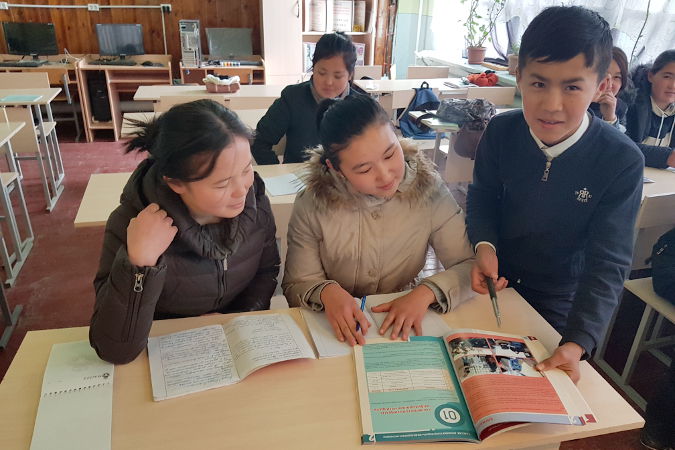 Erlan is conducting peer education sessions for his peer mates on effective use of water resources. Photo: UN Women/Dildora Khamidova

Zhyrgalbek uulu Erlan is a skinny boy with a serious expression. He lives in Naiman, a small village in Southern Kyrgyzstan, bordering Uzbekistan, with a dwindling population of about 1,500 residents. Most young people have migrated, seeking better prospects in the cities.

Naiman also has a water crisis spanning decades. During the Soviet era, Naiman had a mercury factory that employed people from the village. After the factory closed, the site was not cleaned up and unaware of the hazards, the residents dumped the mercury in the canal—the main source of water for irrigation and domestic use in the village. Over the years, the village has received little investment from the state to develop safe water sources. The polluted water from the canal brought diseases, affecting women’s reproductive health and the health of their children.

Adding stress to an already grim situation, when farmers from the nearby communities decreased the amount of water flowing into the village during irrigation season, water disputes erupted.

Today, things are starting to shift in Naiman, and 16-year-old Erlan and his team of young peers are forces behind that change. Trained and supported by a UN Women project funded by the Government of Finland, they have organized a series of initiatives to raise awareness about gender equality in access to water and sanitation, and effective use of scarce water and land.

As a peer educator, Erlan provides advice, tips and practical guidance to his peers on a range of issues—starting with gender equality and human rights and equal access to natural resources, including water.

“The thing that makes me feel happy is that people of all ages turn to me for advice or help. It feels so great that I can contribute towards the development of my village by educating my peers and by spreading the seeds of tolerance and friendship,” says Erlan. 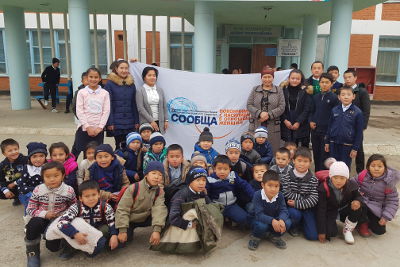 Erlan has started the march from his schools and passed along the streets of his home village to respond and to tackle the discriminatory cases against girls and women. Photo: UN Women/Dildora Khamidova

To advance gender equality and promote safe and peaceful communities, UN Women has been mobilizing youth in seven municipalities across Kyrgyzstan since 2015. The project, titled “Securing livelihoods for vulnerable women, men and children”, connects youth with water associations, local governments and a variety of women’s self-help groups from marginalized communities, to empower local communities and enhance equal access to natural resources.

To date, some 2000 young people have gained advocacy skills on gender equality and promotion of equal access to water resources. As a result of these local initiatives, over 20,000 households in southern and northern regions of Kyrgyzstan have improved access to water.

“The project has also worked towards securing livelihoods for vulnerable women, men and children through efficient use of water and equitable community governance of water resources,” adds Tatiana Prokhorova, UN Women Programme Specialist in Kyrgyzstan. “These young advocates have reached about 28,000 people from local communities through campaigns and awareness raising events.”

Erlan was also a peer educator in the “My Prosperous Farm” course of the project, where he learned how to effectively use a small plot of land and apply innovative approaches to save water, such as by installing a drip irrigation system. The system uses water efficiently by allowing it to drip slowly and directly into the roots of the plant, minimizing waste. 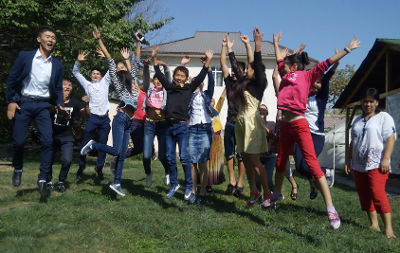 Erlan is with his peer mates during the ToT in southern city of Osh to learn the effective tools of advocacy. Photo: UN Women/Dildora Khamidova

Erlan enjoys his role as a peer educator and believes that influential role models can create positive impact in a community. His inspiration is Roza Shamaeva, the first female deputy and now the head of the municipality in Naiman. Shamaeva, who worked closely with UN Women, has successfully advocated for clean water and quality education in her village, among other issues.

In a series of meetings organized by Erlan and his team of peer educators, Shamaeva discussed with students about ways to tackle harmful practices and discrimination, such as bride kidnapping, early marriage, domestic violence and low participation of women in politics and the labour force.

“Despite his age, Erlan is a very tough boy. He does such an incredible job for the development of our village that men should learn from him,” says Shamaeva.

“Becoming a peer educator is very important to me as it is my way of giving back to my peers and my community and to inspire other boys,” says Erlan, adding, “Girls can achieve as much as boys. Just because you are a boy does not mean you should get more opportunities.”

The young people of Naiman agree that gender stereotypes have reduced in their school since the peer education project started. Girls play football and boys help clean the classes after school. Most recently, the project also supported the community in rehabilitating one out of the six water wells which had not been functional since the collapse of the Soviet Union. The well directly supplies safe water to 57 households, which accounts for almost a quarter of the total population.