Invest and mobilize to end violence against women

One in three women around the world experience violence in their lifetime, often in the hands of someone they know, love and trust. Of all women who were victims of homicide globally in 2012, almost half were killed by intimate partners or family members.

“The price of no change is unacceptable”

In her statement for International Day for the Elimination of Violence against Women on 25 November, UN Women Executive Director Phumzile Mlambo-Ngcuka highlights effective interventions, and reiterates that the pandemic of violence against women and girls can end, but it will need commitment and investment, nationally and internationally. Read more»

Violence against women and girls, a gross human rights violation, devastates lives, causes untold pain, suffering and illness. It also incurs high economic costs. A recent study estimated that the cost of intimate-partner accounted for 5.2 per cent of the global economy [1].

Beyond the direct medical and judicial costs, violence against women takes a toll on household and national budgets through lost income and productivity. In Viet Nam, for example, expenditure and lost earnings resulting from domestic violence was estimated at 1.4 per cent of GDP in 2010 [2]. In the United Kingdom, the cost of domestic violence in 2009, including service-related costs, lost economic output and human and emotional costs, amounted to GBP 16 billion [3].

Deep-rooted inequality in the roles, rights and opportunities of men and women, and attitudes and social norms that condone or normalize such violence, have made the problem tenacious, but not inevitable. With laws to protect women and punish perpetrators, services to rebuild women’s lives and comprehensive prevention that starts early, ending violence against women and girls can become a reality. Yet, robust funding for efforts to end this violence remains woefully insufficient.

Why money matters in ending violence against women and girls

When world leaders adopted the Sustainable Development Goals in 2015, they recognized that ending violence against women and girls is a pre-requisite for the achievement of the development agenda. Goal 5 on gender equality includes a specific target to end all forms of violence against women, including trafficking, other forms of sexual violence and harmful practices. Yet, the resources dedicated to addressing the issue do not match the scale of the challenge.

Allocating adequate resources to prevent and address violence against women is not only a legal obligation and a moral imperative, but a sound investment too.

The US anti-violence law of 1994 provided USD 1.6 billion in programmatic support over five years through increased penalties for perpetrators, improved resources for police, prosecutors and those providing services for survivors. Researchers estimated that savings of USD 14.8 billion were achieved by cutting direct property losses, physical and psychological health-care needs, policing, victim services, lost productivity, reduced quality of life and fatalities [4].

A recent multi-country study in the Lao People’s Democratic Republic and Timor-Leste found that the cost of delivering a minimum package of essential services (over three fiscal years) for women and girls who experience violence amounted to 0.31 per cent of the GDP for Timor-Leste and 0.25 per cent of the GDP for the Lao People’s Democratic Republic in 2015 [5]—a fraction of the cost of the consequences of violence.

All available evidence shows that even relatively small-scale investments that are timely and well integrated can bring enormous benefits to women and their communities. Donate to support efforts to end violence against women and girls worldwide.

Snapshots of Orange the world events in 2015 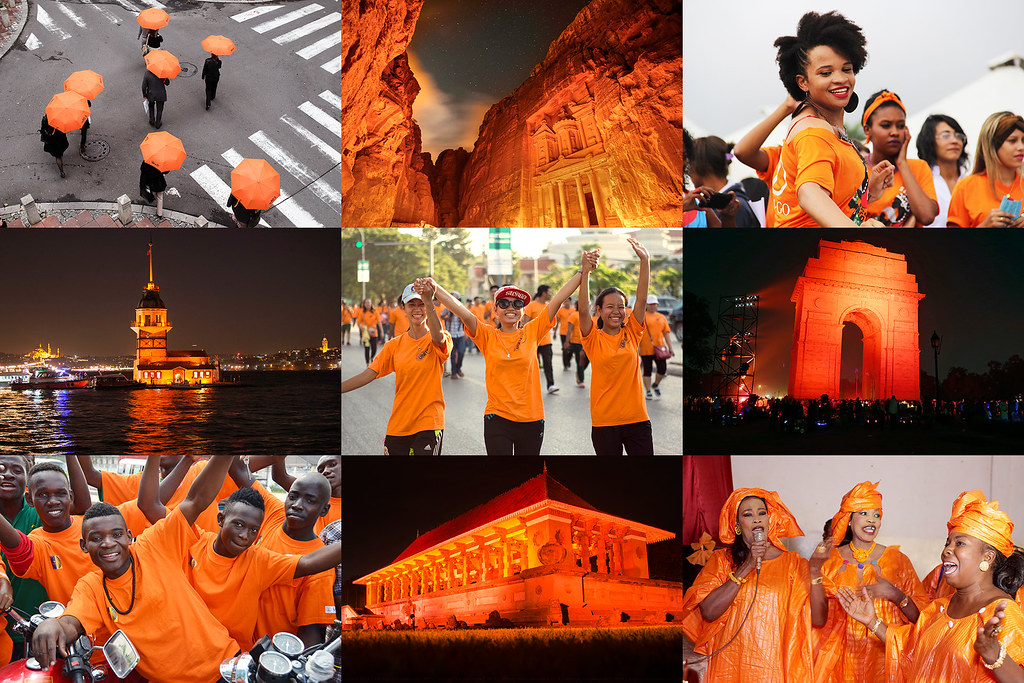 Made in Cambodia, a day in the life of Chhun Srey Sros, a garment factory worker
In Cambodia, 70 per cent of women are engaged in vulnerable employment; more than 500,000 work in garment and footwear factories. Empowering women to exercise their rights to decent work, UN Trust Fund to End Violence against Women (managed by UN Women on behalf of the UN system) is working closely with partners to ensure discrimination and violence-free work environments in Cambodian factories.

From where I stand “Since my childhood I have seen girls and women not being treated equally as boys and men. I see this in everyday life and in the films we watch...”

Aiturgan Djoldoshbekova is participating in a school-based programme to empower girls and change attitudes to prevent bride kidnapping and early and/or forced marriages. Her mother, Aigul Alybaeva, supports her daughter’s work. Read more»

See also: Religious leaders at the forefront of ending gender-based violence in Ethiopia “In Mali, violence against women has reached a point that we couldn’t have imagined before. We are burying our sisters today, tomorrow it could be our daughters...”

Balla Mariko, 40, a father of two young daughters and a son, is a member of a Malian network of men and women working to end domestic violence and promote women’s rights. Read more»

Sarah’s Story: Improving essential services for survivors of violence against women and girls

Despite extensive commitment by women’s organizations, governments and other partners, many women and girls subjected to various forms of violence still lack access to essential services. This lack of access to such services by women and girls means that they continue to suffer from the physical and mental impacts of violence. To improve the quality of and access to essential multi-sectorial services UN Women has partnered with four UN agencies to develop the Joint Global Programme on Essential Services.

Ending Violence against women and girls: If not you, who?

Violence against women remains one of the most pervasive global human rights violations. The Sustainable Development Goals include the elimination of all forms of violence against women and girls as a specific target. UN Women, together with all its partners, is working to support countries in the area of comprehensive laws and policies for ending violence, prevention, provision of quality essential services and improved data collection and analysis. Making public transport safe for women and girls in Papua New Guinea
In Papua New Guinea, more than 90 per cent of women and girls have experienced some form of violence when accessing public transport. UN Women’s Safe Public Transport for Women and Children has launched safe buses, trained transport authorities and engaged communities in awareness raising. Young people in Viet Nam organize to end dating violence
The first-ever survey on dating violence in Viet Nam showed that almost 59 per cent of young women have experienced violence perpetrated by their partners. Presented with the findings of the survey, the CEDAW Committee has recommended the Government to review the criminal law and penalize all forms of violence against women, including dating violence.

See also: From where I stand: Elizabeth Chatuwa Rebuilding lives after Boko Haram
More than 2,000 girls and women have been abducted by Boko Haram in Nigeria. The international community continues to advocate for their safe return. But after the girls are back, what happens to them? What happens to the children of rape and their young mothers? A programme by UN Women is working to ensure that the humanitarian response addresses the specific and unique needs of women and girls.

See also: From where I stand: Francesca De Antoni See also: From where I stand: Maia Țaran Advocacy and laws confront trafficking across the Arab States
A three-year anti-trafficking programme supported by the UN Trust Fund to End Violence against Women is boosting legal enforcement against the crime in Egypt, Jordan and Morocco. In Brazil, new law on femicide to offer greater protection
With the new law, Brazil is the first pilot country adapting the Latin American Model Protocol for the Investigation of Gender-related Violent Deaths, promoted by UN Women and OHCHR

“The price of no change is unacceptable”
In a statement for International Day for the Elimination of Violence against Women, UN Women Executive Director Phumzile Mlambo-Ngcuka highlighted the importance of national and international commitment to and investment in ending violence against women and girls. A framework to underpin action to prevent violence against women
Prevention cannot be a short-term effort, but rather an endeavour that requires ongoing commitment from governments and other stakeholders, increased research to inform and monitor progress, and persistent action that addresses violence against women at its source. The joint UN framework draws together contemporary knowledge and practice in violence prevention. Its focus is on addressing the root causes as well as risk and protective factors associated with violence against women. Orange your profile picture to show your support!

Help us raise awareness about gender-based violence and the need for funding to stop it.

Spread the word on all social media platforms using the hashtags #orangetheworld and #16days! You can get orange graphics, infographics and sample messages here.

Join the ‘Orange the World’ Event page on Facebook now and post photos and actions happening in your country during the 16 Days of Activism.

[1] Anke Hoeffler and James Fearon, Benefits and Costs of the Conflict and Violence Targets for the Post-2015 Development Agenda, 2014, available at http://docplayer.net/20788510-Benefits-and-costs-of-the-conflict-and-violence-targets-for-the-post-2015-development-agenda.html

[3] Anke Hoeffler and James Fearon, Benefits and Costs of the Conflict and Violence Targets for the Post-2015 Development Agenda, 2014, available at http://docplayer.net/20788510-Benefits-and-costs-of-the-conflict-and-violence-targets-for-the-post-2015-development-agenda.html