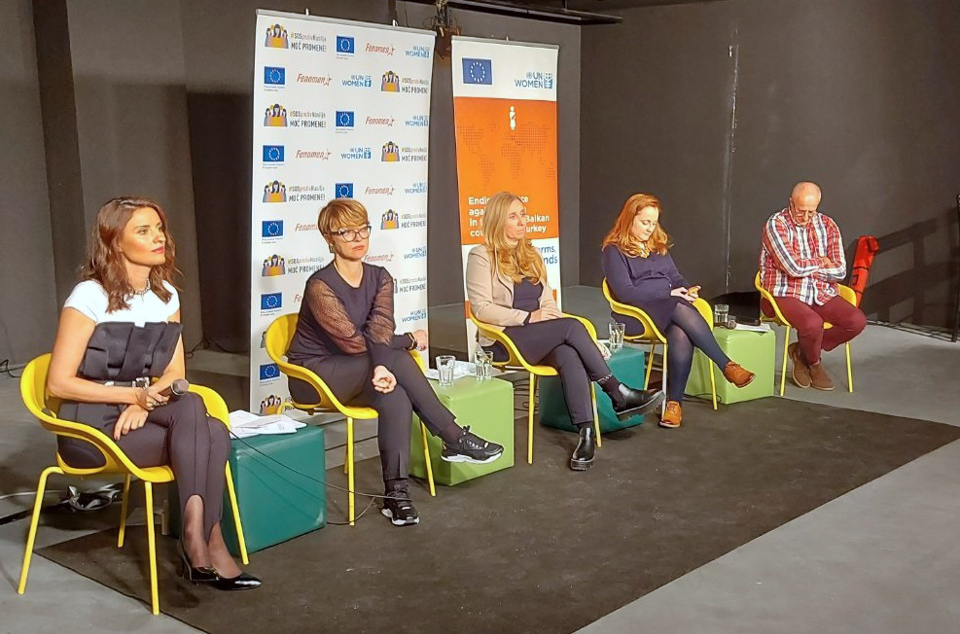 The COVID-19 pandemic showed that home is not always a safe place for women and their children, especially during the lockdown. UN Women Serbia and non-governmental organization Fenomena teamed up to organize a national campaign, named “#SOSagainstViolence,” aimed at decreasing violence against women during and after the COVID-19 pandemic, within the regional programme on ending violence against women “Implementing Norms, Changing Minds,” funded by the European Union. The campaign, which was kicked off in November 2020 and lasted till November 2021, included an extensive media campaign, a mentorship programme for journalists and a course for high school girls on gender-based violence.

“Through the media campaign, we were seeking to raise public awareness about the decline of gender equality during the pandemic and the importance of reporting violence,” says Marija Petronijevic, program coordinator at Fenomena, one of the organizers of the nation-wide campaign “#SOSAgainstViolence”. She added, “The media plays an important role in promoting zero tolerance for violence, as well as in informing the public about the problem of partner violence, legal provisions regarding perpetrators and victims, protection of women survivors and the responsibility of each of us in relation to violence against women.”

The 12-month long media campaign resulted in more than 250 minutes of TV programming and 150 printed articles related to the prevention of violence against women and the need to report violence, as well as issues of toxic masculinity and gender roles, which have a direct impact on rolling back women’s rights during the health crisis and isolation.

“It is good to know how to report on this topic as responsibly as possible because we need to think about the wellbeing of women survivors and their families and to report in a way that doesn’t add to women’s suffering. One of the most important things we learned is how to report ethically, which terms to use and how to encourage women to report violence and to whom. Now, it’s up to us to adhere to the principles we learned,” says Trajković.

Although the national campaign aimed at increasing knowledge and raising awareness among the general public, special attention was given to high school girls for violence prevention. Marija Petronijević points out that, according to the research “Men in Serbia – changes, resistance and challenges”, 69 per cent of high-school girls and 64 per cent of boys agree with the sentence “A girl dressing in short skirts and tight shirts is personally guilty of being attacked.” Another survey of the Autonomous Women’s Center shows that each tenth girl still thinks that one slap in the face is not violence. Propelled by these findings, a course on gender-based violence, named “The Power to Change,” was designed for high school girls.

Anđela Milovanović, one of the participants of the course, says that violence is present and normalized in our everyday lives. “This course was an opportunity to learn more about the support we can provide to someone who is in a violent situation. I learned how important it is to take that first supportive step and how to do it safely. Before the workshop, I wasn’t aware of the consequences that standing aside can have on a person who suffers from violence. The power of change lies in each one of us, and we need to use it. We shouldn’t be silent observers,” she says.

Programme manager of UN Women, Natalija Ostojić, says the crisis caused by the pandemic resulted in uncertainty and frustration related to fear of contracting the virus, but also economic loss and uncertainty, lockdowns, restrictions in movement and deprivation, contributed to increasing levels of violence against women. “Recognizing the current high and unacceptable level of violence against women in Serbia, UN Women is devoted to supporting the development of innovative solutions that contribute to communities’ greater understanding of and favourable attitudes towards gender equality, as well as to their mobilization to end violence against women. Therefore, it was clear that we needed a campaign targeting the eradication of the increasing patriarchal discourse that occurred during the health crisis, the necessity of reporting violence, and the accountability of the government to provide continuous support to women victims of violence,” explains Ostojić.

Related News
22/03/2022
Take Five: “New video communication service is a step towards removing invisible barriers in access to justice for women victims of violence who are deaf or hard of hearing”
19/01/2022
Take Five: “Continuous education changes the attitudes and awareness of all professionals in the system, in order to achieve zero tolerance to violence”
07/12/2021
Take Five: “It is crucial to strengthen the capacities of institutions to provide online support to women survivors of violence”
15/11/2021
Take Five: “It was my job to scream for the victims!”
21/04/2021
Call for Proposal for civil society organizations in Serbia to submit project proposals for improving the quality standards for shelters and advancing free legal aid service
END_OF_DOCUMENT_TOKEN_TO_BE_REPLACED