“Light the Dark” exhibition shines a spotlight on violence against women

Artists from different fields are displaying their artwork at a lighting installation exhibition dedicated to ending violence against women. Organized by UN Women in partnership with the Istanbul Metropolitan Municipality and with the financial support from the European Union, the exhibition was opened with a ceremony on 27 November. 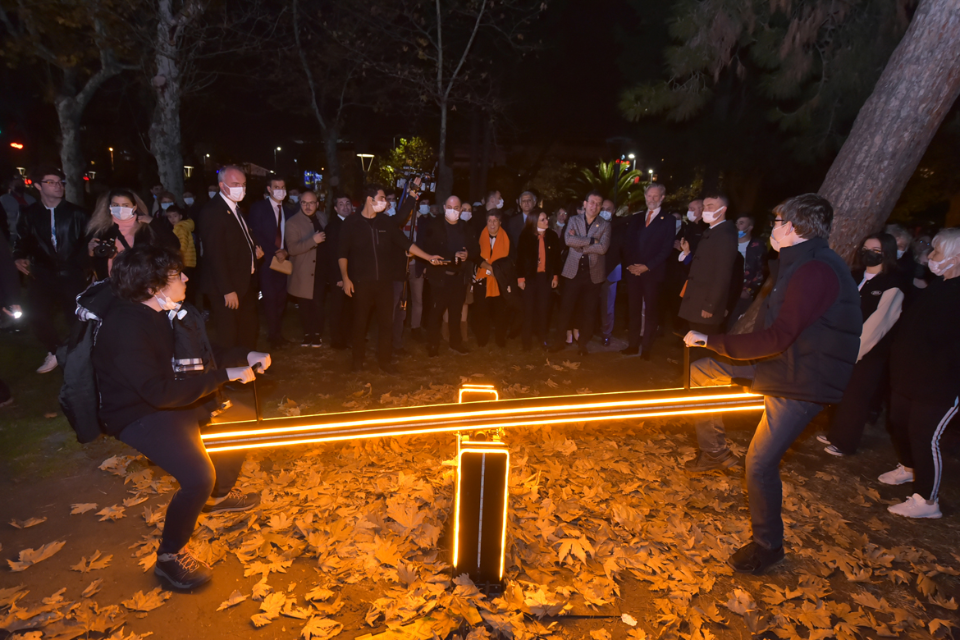 Drawing attention to violence against women, the “Light the Dark” art exhibition kicked off at Yoğurtçu Park, Kadıköy on 27 November 2021 with the participation of Ekrem İmamoğlu, the Mayor of the Istanbul Metropolitan Municipality; Eleftheria Pertzinidou, the Minister Counsellor and Deputy Head of the European Union Delegation to Turkey; Peter Ericson, the Consul-General of Sweden; Alia El-Yassir, UN Women Regional Director for Europe and Central Asia; and Asya Varbanova, UN Women Turkey Country Director.

The “Light the Dark” exhibition – organized during the 16 Days of Activism Against Gender-Based Violence Campaign, which runs yearly from 25 November to 10 December, depicts different forms of violence against women and girls through the creative use of lighting designs and installations.

“Violence against women and girls remains pervasive but is not inevitable. Together we can end this ‘shadow pandemic’ by taking action. We must step up our efforts to make our homes, cities, and public and digital spaces safe and secure,” said El-Yassir.

“We will not stay silent to violence against women on the street, at work, on social media and at home. I would like to express my gratitude to everyone especially civil society organizations who have supported the women’s rights struggle. We stand with women and we are against all forms of violence,” said İmamoğlu, during his opening remarks.

“We are here today to express our solidarity to all women that are victims of gender-based violence; whether they can or they cannot raise their voices against it. Violence against women and girls is a pervasive human rights violation. Domestic violence had been a ‘shadow pandemic' even before COVID-19 broke out. Gender-based cyber violence is spreading fast. With the ‘Light the Dark’ exhibition, we support civil society organisations in advocating for the advancement of women’s rights in Turkey,” stated Pertzinidou.

The first display of the “Light the Dark” art exhibition was held at Seğmenler Park, Çankaya, a district of Ankara, in 2019 by UN Women in partnership with the Ankara Metropolitan Municipality, Çankaya Municipality and the Embassy of Sweden.

This year, the exhibition is organised in partnership with the Istanbul Metropolitan Municipality, under the “Strengthening Civil Society Capacities and Multi-Stakeholder Partnerships to Advance Women’s Rights and Gender Equality in Turkey” project funded by the European Union and implemented by UN Women.

The exhibition will remain open at Yoğurtçu Park in Kadıköy between 27 November – 10 December.

Within the exhibition, an interactive “mapping” art piece, that brings together sound and light, will be displayed at Şişhane Metro Station between 27 November and 4 December. Created by Ecem Dilan Köse, it invites everyone to an open microphone to record their messages in solidarity with the movement to end violence against women.

The 16 Days of Activism Against Gender-Based Violence Campaign runs globally every year from 25 November (International Day for the Elimination of Violence Against Women) to 10 December (Human Rights Day) under the leadership of the United Nations Secretary-General. Leading the campaign in Turkey, UN Women Turkey has been drawing attention to violence against women and girls with fireflies since 2018. The fireflies, which communicate with each other and light the dark through their blinking lights, have been the main symbol of the 16 Days of Activism campaigns of UN Women Turkey since 2018.