UN Women kicks off #RaiseYourVoice to end violence against women

Under the 16 Days of Activism against Gender-Based Violence campaign, UN Women urges everyone to take a stand when they witness violence against women and girls. The #RaiseYourVoice (#KayıtsızKalmayın) campaign informs people what to do when they witness violence at https://fireflies.digital/. The platform invites visitors to join the online solidarity movement by recording voice messages and sharing them on social media. 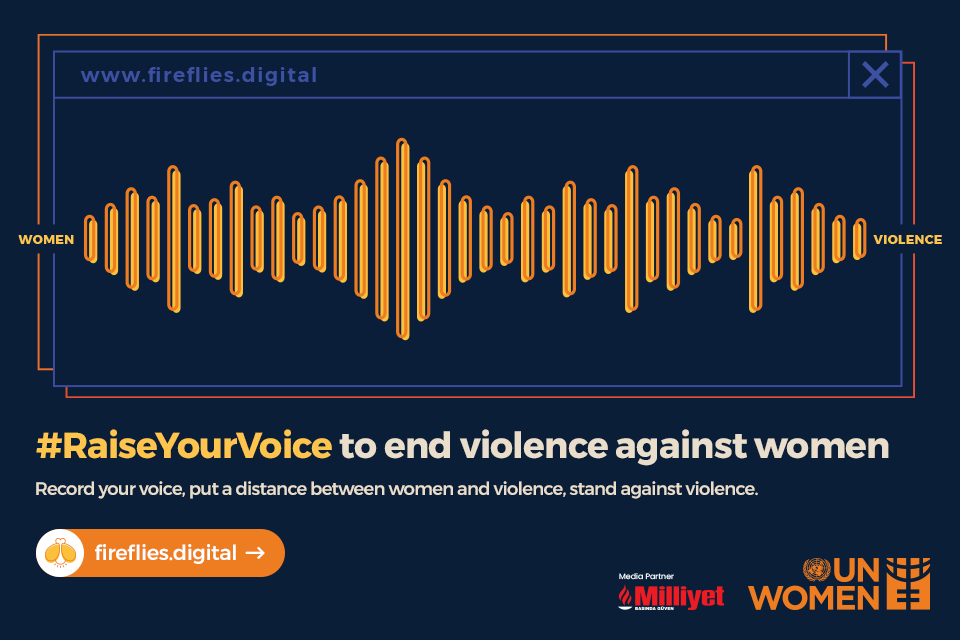 The “16 Days of Activism against Gender-Based Violence” is an annual international campaign that kicks off on 25 November, the International Day for the Elimination of Violence against Women, and runs until 10 December, Human Rights Day.

During the 16 Days, this year UN Women Turkey kicks off the #RaiseYourVoice campaign to raise awareness on what to do if one witnesses violence against women and girls. UN Women has been using fireflies as the symbol of solidarity against violence since 2018.

This year’s campaign hands the mic to everyone to say “I am raising my voice”. Visitors can download their voice recordings, share them on social media, and invite their friends to join in solidarity.

The campaign details individual actions that can be taken in response to incidents of violence in different settings, such as at home, among a group of friends, on social media, at work or at a sports club. Visitors can listen to cases to learn about ways to take action against an act of violence. The cases are recorded by well-known celebrities from Turkey who take a stand against violence against women, including Demet Evgar, Ceyda Düvenci, Deniz Bayramoğlu, Emre Sakçı, Pınar Deniz and Gupse Özay. The media partner of this campaign is Milliyet newspaper, which is a members of UN Women’s Media Compact.

“Violence against women often goes unreported, silenced by stigma, shame and fear. Misconceptions that it is a private matter and lack of awareness on where and how to seek support, emerge as key reasons that contribute to victims’ and witnesses’ reluctance to report crimes. To eliminate violence against women we all need to know our rights and where to access existing services when needed. Only together can we put an end to violence and secure an equal and just future free from violence,” says UN Women Turkey Country Director Asya Varbanova.

Light The Dark exhibition and mapping

Previously displayed in Ankara, “Light the Dark” exhibition is also kicking off in Istanbul, Yoğurtçu Park. Hosted by the İstanbul Metropolitan Municipality and funded by the European Union, the lighting installation aims to raise awareness on gender-based violence by fusing art and activism in a public space. An interactive “mapping” art piece, that combines sound and light will be displayed at the Şişhane Subway Station between 27 November–4 December. Created by Ecem Dilan Köse, it invites everyone to an open microphone to record their messages in solidarity with the movement to end violence against women.

Started by NGOs and women’s rights activists in 1991, today the 16 Days of Activism campaign is used as an organizing strategy and platform by individuals and organizations around the world to call for the prevention and elimination of violence against women and girls.

In support of this civil society initiative, under the leadership of the UN Secretary-General, the campaign calls for individuals and organizations to take action to increase awareness about violence against women and girls and galvanize advocacy efforts. To this end, individuals and organizations use the campaign’s signature colour, orange, which symbolizes light and hope.

UN Women in Turkey has been organizing campaigns, events and activities since 2012 as part of the 16 Days of Activism to raise public awareness about violence against women in Turkey and call on citizens to join the movement to prevent gender-based violence.

Data on violence against women