A new coalition to drive greater action on economic rights and justice for women in Bosnia and Herzegovina (BiH) was launched at a high-level event on 5 October. The new Action Coalition for Economic Justice and Rights will focus on the economy of care. 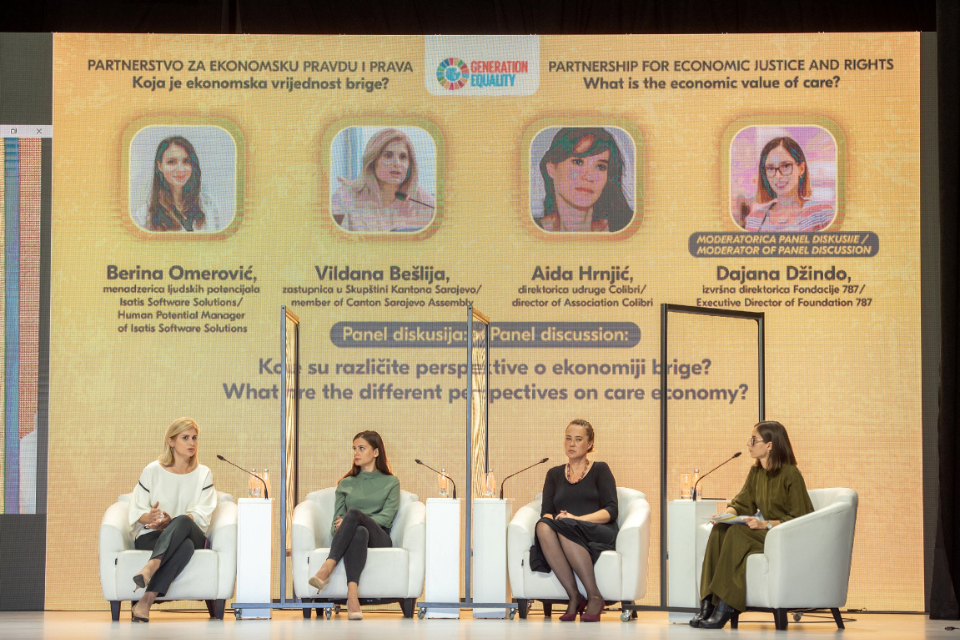 In Bosnia and Herzegovina, the focus of the new Action Coalition will be on the care economy as a part of a global UN Women campaign dedicated to improving gender equality throughout the world by responding to critical constraints women and girls face in the economy. Photo: UN Women BiH/Denis Ruvic.

The new Coalition was launched on 5 October in Sarajevo at an event entitled, ‘Partnership for economic justice and rights: What is the economic value of care?’. It is part of a global UN Women campaign dedicated to improving gender equality throughout the world by responding to critical constraints women and girls face in the economy. In Bosnia and Herzegovina, the focus of the new Coalition will be on the care economy. The work will begin by kickstarting the dialogue on the topic of care with institutions and civil society organizations and raising awareness about both paid and unpaid care work. A crucial part of this process is advocating for women to realize their full potential by encouraging them to participate in the labour market and supporting start-ups led by women.

“With only 36.5 per cent of women active in the labour market in Bosnia and Herzegovina, one of the key goals for the United Nations is to see as many women as possible join the workforce. We are dedicated to cooperating with all line institutions on finding systemic solutions in the areas of childcare, elderly care, and care of vulnerable people, who are often under-reported or disregarded. Related to this, the lack of sex-disaggregated data on the care economy represents a substantive challenge that we also hope to work on with our key partners,” said UN Resident Coordinator in BiH, Ingrid Macdonald at the event.

“Services of childcare, social services, care by members of the family and community, have an immense economic and social value, but they are not valued in terms of financial remuneration. Both paid and unpaid labour, especially when done by women, needs to be valued equally. We will work on this together,“ said Samra Filipović-Hadžiabdić, Director of the Agency for Gender Equality of BiH of the Ministry for Human Rights and Refugees.

The event was held in the International Youth Center Novo Sarajevo and was broadcasted via Zoom and Facebook Live to more than 100 participants from across the country. H.E. Matthew Field, British Ambassador to BiH, said: “Gender equality benefits everyone – this is why the UK champions it globally. In BiH we are working to help the country become a place where there are equal chances for girls and boys, for women and men. A partnership approach helps us catalyse collective action, drive investment and deliver change. We are proud to have worked closely with our partners at UN Women, Sweden, and Foundation 787, and we are looking forward to continuing this collaboration. This initiative means greater awareness in government of the issues women face, and better access to finance and gender-responsive products and services to give women those opportunities that men often take for granted.”

The new Action Coalition for Economic Justice and Rights will address critical constraints that women and girls face in the economy by advancing bold, game-changing actions by 2026, including advocating for quality pre-school education and accelerating investment in the care economy. Sweden is one of the strategic partners of this process at the global level.

“Sweden hopes that a broad spectrum of stakeholders, including civil society organizations and activists, will use this opportunity to demand change, to hold duty bearers to account, and to make bold decisions to improve the situation for women, girls, men and boys,” said Lisa Curman, deputy head of Development Cooperation at the Embassy of Sweden in BiH.

After the keynote speeches, Elvira Ganibegović, entrepreneur and owner of kindergartens, Kidtropolis, from Zenica, shared her experiences and challenges in starting her own business. Later, a panel discussion featured change-makers including Berina Omerović, Human Potential Manager at Isatis Software Solutions; Vildana Bešlija, Member of Canton Sarajevo Assembly and Aida Hrnjić, Director of Association Colibri. The panel discussion was moderated by Dajana Džindo, Executive Director of Foundation 787.

Event participants agreed that economies and societies depend on providing care to survive and thrive, and women make up most of the labour force in both the paid and unpaid economy of care.

The event was organized by UN Women, with the support of Sweden, and in partnership with the Agency for Gender Equality of BiH, Gender Center of Republika Srpska, Gender Center of Federation of BiH, the United Nations in BiH and the British Embassy in BiH.