The HeForShe University Tour has kicked-off in Ukraine in September and has sparked a lively debate among students and staff of Ukrainian universities on gender equality, with a focus on stereotypes and discrimination on campus. From 16–27 September 2021, the HeForShe University Tour visited five universities across Ukraine. In Chernivtsi, Lviv, Kyiv, Dnipro, and Mariupol, the Tour facilitated conversations with more than 500 Ukrainian students and professors, emphasizing the urgency of addressing gender inequality and stereotypes in their universities.

To kick-off the conversations about gender equality and inequality with university students, HeForShe Ukraine created an educational film, Stereotypes do not define you, staring famous Ukrainians.  Specifically made for students, the film shows that discrimination should not be normalized and tolerated. It also shows viewers how to distinguish between different types of inappropriate behavior and how to act against them. The Ukrainian celebrities who starred in the film talked about how they had faced stereotypes in their lives and built their inner confidence to free themselves from others’ opinions. The celebrities urged university students to raise their voices and challenge gender discrimination and sexism by classmates, university administration and teachers.

After the film was screened at the universities, panel discussions saw students and professors reflect on their role in promoting gender equality and eliminating gender stereotypes.

“We need to fight for gender equality and not feed gender stereotypes,” said Maria Vakuliuk, a student at the National University of Kyiv-Mohyla Academy.

“People need to speak up about their rights,” said Denis Ribalkin, a student at the Donetsk State University of Internal Affairs.

“Everyone needs to have a choice and equal opportunities. Be yourself regardless of your gender,” said Solomia Yavorska, a student at the National University of Kyiv-Mohyla Academy.

Students were able to share their opinions during the public dialogue after the film screening on how gender stereotypes and gender-based discrimination affects individuals from all walks of life.

“UN Women Ukraine believes that young people have the power to positively transform our societies, economies, and political systems and to put human rights and gender equality at the center of all reforms. We are excited to have joined forces with Ukrainian universities and to bring this conversation directly to students,” remarked Erika Kvapilova, UN Women Country Representative in Ukraine. 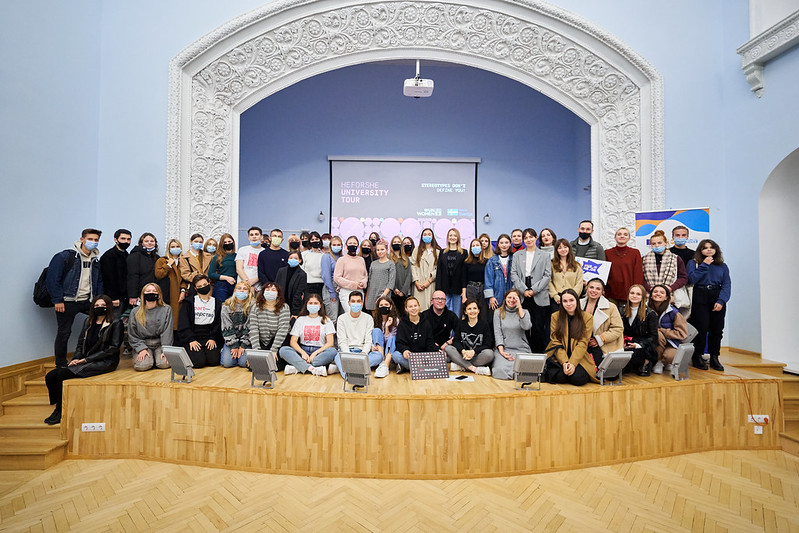 Created by UN Women, the HeForShe solidarity movement for gender equality provides a systematic approach and targeted platform where men and boys can engage and become change agents towards the achievement of gender equality. Since its launch in 2014, hundreds of thousands of men from around the world and all walks of life, including Heads of State, CEOs, and global thought leaders, have committed to gender equality. The HeForShe movement in Ukraine is implemented with the financial support of Sweden.

Related News
16/07/2021
Meet the editorial team of “Awake Not Sleeping: Reimagining Fairy Tales for a New Generation”
25/06/2020
In the words of Olena Hryhoriak: “The issues of violence and discrimination should not be silenced”
24/08/2016
Summer school promotes empowerment of Roma girls in Moldova
09/12/2021
In the words of Melek El Ahmed: “Violence begins when we do not give our daughters the same opportunities that we give our sons.”
02/12/2021
I am Generation Equality: Amiran Karatsev, advocate for women’s rights and feminism
END_OF_DOCUMENT_TOKEN_TO_BE_REPLACED