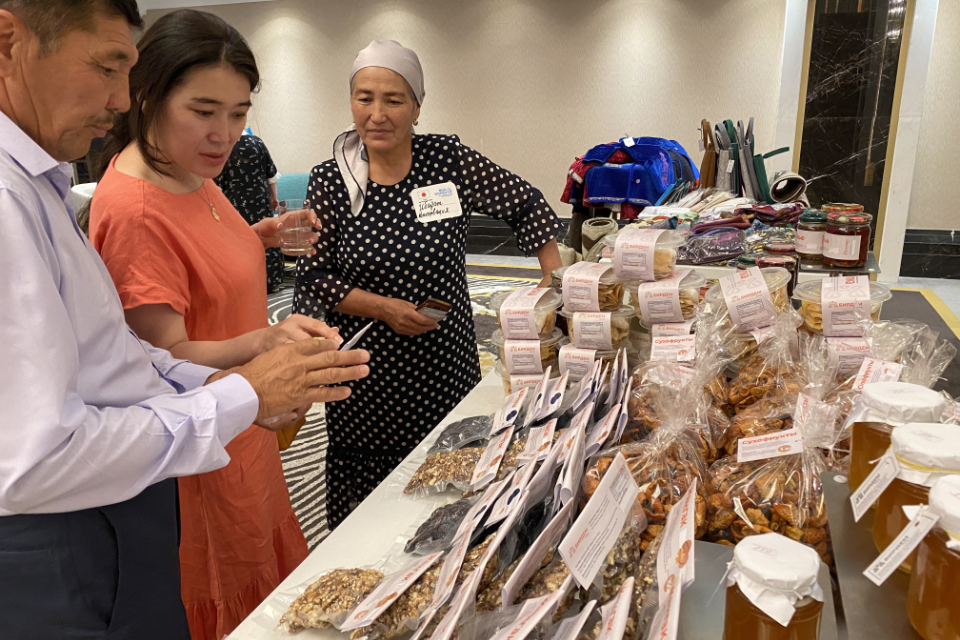 On 26 May 2021, the UN Women country office in Kyrgyzstan held a final conference presenting the result of the project entitled: Responding to the urgent needs of women and girls in a vulnerable situation aggravated by COVID-19 in Kyrgyzstan.

This UN Women and Government of Japan project has supported rural women in Naryn, Osh and Jalal-Abad regions to revive their economic activities. A special focus was placed on increasing rural women’s access to economic resources; also developing their potential in implementing projects, considering energy-saving technologies; and ensuring their participation in local self-government, as well as in measures to prevent and respond to emergencies.

“We are very pleased to have carried out a project in which girls and women from rural areas participated. I believe we have contributed to solving the issues of expanding the economic activity of women and migration issues as well. More than 500 women and girls took part in the project, and 156 of them were given the opportunity to continue their economic activities in the future,” said UN Women representative in Kyrgyzstan, Ulziisuren Jamsran.

“As part of the project, we have raised up many women leaders who are now showing successful results. Such a large project is closing, but I believe that this is only the beginning of a big step in realizing the rights of vulnerable girls and women. We will continue to attract women to entrepreneurship,” said Deputy Minister of Health and Social Development, Aliza Soltonbekova. 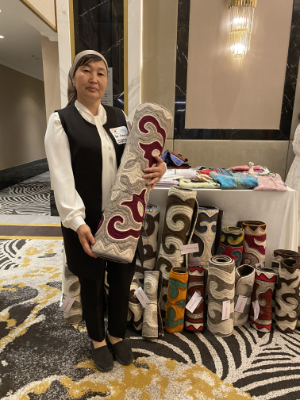 “The pandemic has affected all countries of the world and all people, but statistics show that it was women who suffered the most. And we were happy to UN Women project, which has brought very positive changes in society,” said Japanese Ambassador to Kyrgyzstan Shigeki Maeda.

The event also hosted an exhibition of products that women-beneficiaries of the project produced, they also created a united brand Birdem, which is uniting the products from different project regions.

Various types of textile products, jams and bakery items were showcased at the exhibition. For example, under the Birdem brand, craftswomen from the Naryn region presented shyrdak – a national rug using a complex mosaic technique – while businesswomen from the Jalal-Abad region displayed dried fruits, and entrepreneurs from the Osh region presented an ecologically clean semi-finished product called zhupka.

“Because of COVID-19 a lot of families were left without income and thanks to the project women had a chance to get engaged in income generating activities. We started producing and selling products that once we were just doing at home,” said a project beneficiary Ibadat Ergeshova from Nookat rayon, which is in South Kyrgyzstan’s Osh region. Ergeshova started to produce home-made jam under the brand Birdem.

The main results achieved during this project:

The project applied innovative approaches to address gender inequalities, such as the burden of unpaid and invisible women's work. 42 families were identified among the target villages, they had trainings and sessions about unpaid care work, fair family relations and others, which led to positive changes in their family lives. Through the project, a series of dialogues were held among community members on unpaid care work. Facilitated self-reflection sessions with family members were also held. Advocacy aimed at changing norms and behaviours was also undertaken, promoting equality, mutual respect, and consent in defining roles and responsibilities within households.

Sixty-eight women activists affected by the COVID-19 crisis gained broader leadership skills and opportunities to participate in decision-making process and access to opportunities for improving their livelihood. The groups participated in local planning and developed local-level crisis response plans. They implemented six social projects set out in the response plans, enabling women to access the necessary health services on time, despite the crisis.

Related News
29/06/2022
Hundreds of rural women across Serbia are job-ready with new skills and confidence
18/05/2022
Families start businesses, redistribute chores, and transform gender norms in Kyrgyzstan
14/04/2022
Interview: “In organic production, rural women in southeast Serbia can earn more and ensure steady source of income”
08/11/2021
Improving livelihoods of rural women across Ukraine
08/09/2021
Diana Crudu: “If tomorrow women refused to harvest, to tie, to milk, the entire agriculture of the Republic of Moldova would be paralysed”
END_OF_DOCUMENT_TOKEN_TO_BE_REPLACED