Take five: “Gender-responsive budgeting is a tool to empower women and to reduce inequality in our society” 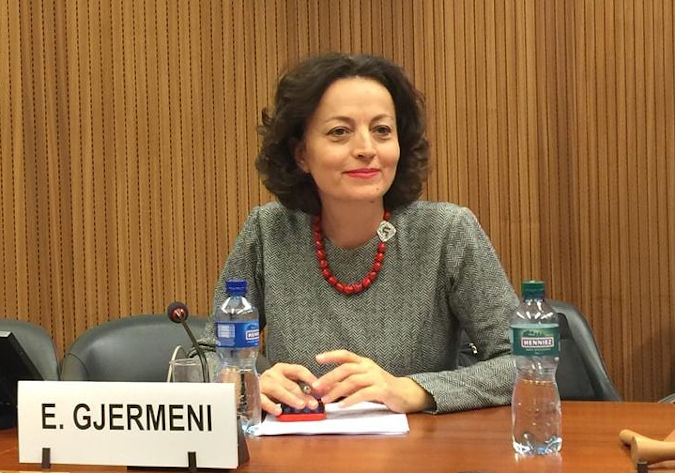 Ms. Eglantina Gjermeni, chairwoman of Parliamentary Sub-Committee on Gender Equality in Albania, was a key speaker at the “Smart investments: Financing for gender equality” side event, held during the 25th year anniversary of the Beijing Platform for Action (Beijing+25) Regional Review Meeting for the UN Economic Commission for Europe (UNECE) Region. This important event took place in Geneva between 29-30 October 2019. In this interview, Ms. Eglantina shares Albania’s experience with implementing gender-responsive initiatives, and why gender-responsive budgeting gives women a tool to voice their needs and hold their governments accountable.

What are considered to be best practices in gender-responsive budgeting in Albania?

Gender-responsive budgeting is a relatively new initiative in Albania. The full government commitment that we had for addressing gender inequalities helped to establish all the needed legal and institutional frameworks. Gender-responsive budgeting started with the support of UN Women in different areas: in social and healthcare, in addressing violence against women, and in-home care. These have been smaller initiatives that had an impact on women and on addressing gender inequality in general. Growing from 2015, we now have 35 programmes within different ministries that have gender budgeting initiatives. I think it is a good start and we should continue doing this.

What have been the pitfalls in developing good practices in gender-responsive budgeting?

Besides improving the legal framework and having concrete initiatives, at the same time, we have trained and built the capacities of public administration staff in order to understand, and secondly, to really implement these initiatives. Even so, we still faced some challenges. We realized that we need more gender-disaggregated data, not only in our country, but in the Western Balkans as well. We also need to use all the gathered data for designing policies or measuring the impact. For our initiatives in gender budgeting, we always tried to combine knowledge in terms of gender equality and knowledge on fiscal or financial management. We should increase these complementary relationships by building capacities and fostering more economists who are feminists.

Can gender-responsive budgeting ensure that budget allocations and spending meet the needs of men and women equally?

When we talk about addressing women’s needs, this cannot be done only through discussions or only through women’s participation in decision-making, we also need money and resources. At the end of the day, what is gender-responsive budgeting? It is, in fact, a tool to empower women, in order to reduce inequality, which still persists in our society, and to allocate financial resources to women that have been side-lined till now.

What are the prerequisites for having more gender-sensitive policies?

I think besides the political commitment, another important factor is women's participation at the decision-making level. In Albania, almost 30 percent of people in parliament are women. And, more than 50 percent of those in government are women. We have many women in local councils, and all women in these positions are open and sensitive to implementing gender-budgeting initiatives or programmes focused on women’s empowerment. So, since political commitment exists, since there is a high percentage of women in decision-making, and there is an improvement of the legal and institutional framework on gender equality, we are working step-by-step on further promoting gender-responsive budgeting initiatives that already started. We are also trying to broaden them in other areas of our economy. It is a big challenge and we are starting with small steps.

What is your message to those who are reluctant to promote gender-sensitive policies?

We need to challenge gender stereotypes, to make sure that politicians, government officials, and people see that gender inequality exists. I think that civil society representatives, women’s rights activists, women researches should bring data demonstrating gender inequality first to make them aware that these problems do exist, and to calculate the costs of, for example, domestic violence. This kind of data will get people thinking. This is the strongest way of challenging traditional stereotypes. The increase of women’s participation at all levels in decision-making is a guarantee that these reforms and legislation will be more gender-sensitive and will address the needs of more women.

We also need to remind our governments time-after-time that they did make commitments and this a way to remind them that they are living in a global world and they have commitments towards equality. The other thing is to involve them and help them learn from other’s experiences.