In the words of Sanem Öztürk: “Our aim is to build a strong and enduring solidarity network that brings together women from Turkey and Syria”

Sanem Öztürk is a sociologist and activist based in Istanbul, Turkey. She holds a sociology degree from Middle East Technical University and a master’s degree from Mimar Sinan Fine Arts University. She has been working for the Women’s Solidarity Foundation (KADAV) since 2011. As part of the ‘Implementing Norms, Changing Minds’ programme, KADAV is partnering with UN Women to build the capacity and maintain a network of Syrian and Turkish women CSOs, to work together to develop tools for combating sexual and gender-based violence within the framework of the Istanbul Convention and CEDAW. 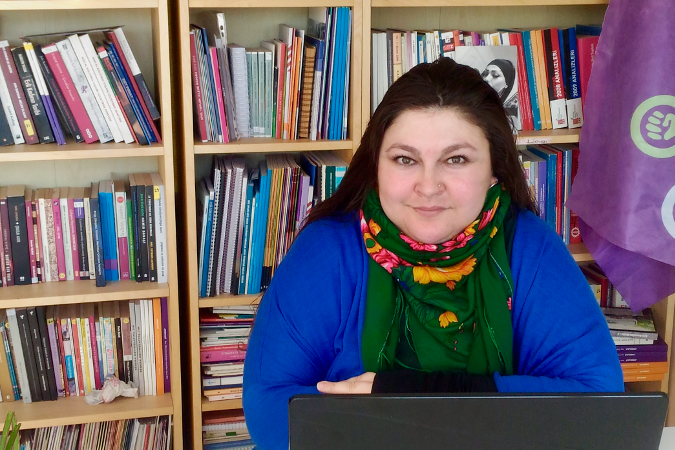 I think the first step to ending violence against refugee women is to take a holistic approach: taking into account both specificities and intersectionalities. Violence against women is a huge problem for all women in Turkey and unfortunately, as the numbers show, it is getting worse. Being a refugee, of course, exacerbates the situation: most Syrian women are not aware of their rights under ‘temporary protection’ or the mechanisms they can access in cases of violence. To change attitudes in Turkey, we have to start talking about the ‘rights of refugees’ and ‘women’s human rights’ instead of ‘the aid and services given to refugees’. Unless we talk specifically in terms of rights, Syrians will not be perceived as equals in the eyes of ordinary people – helping to perpetuate violence against them in our society.

Syrian women have fled from a conflict zone where there was little freedom of expression or freedom of organization. The women we work with in the field frequently state that, for the first time, they now have the opportunity to be part of women’s organizations or initiatives in Turkey. Of course, refugee women still face many challenges in setting up their own initiatives. First of all, there are many legal obstacles they have to contend with. And then there is the issue of survival; for many, the main priority is to ensure a life for their children and for their families in a country where xenophobia and anti-refugee sentiment are on the rise. For refugee women, establishing a group or initiative is not the first thing that comes to mind when their very presence in the country is still being questioned.

Another important challenge is the lack of connection with the women’s movement in Turkey. This is important, because women’s organizations or initiatives are largely built on mutual support, the exchange of ideas, and learning from the experiences of others.

But despite all these challenges, there are many women’s organizations initiated by Syrian women, especially in the cities on the Turkish border. Now, our primary aim is to create a strong network that will include women from both Syrian and Turkish organizations, as well as independent feminist women.

It is also necessary for women’s organizations to work together to develop ideas on how we can more effectively protect women from violence. Despite issues with their implementation, CEDAW and the Istanbul Convention are among the best tools for combating gender-based violence. It is important to note that in some recent cases in Turkey, legal decisions have made reference to the Istanbul Convention – which is a very important development for us. For this reason, it is essential to organize trainings all over Turkey, to learn how to utilize and protect these international legal instruments, as well as our national laws and policies, to fight gender-based violence. It is my belief that we have to hold on to both the Istanbul Convention and CEDAW and try to formulate ways of using them more effectively. And of course, all this work should also include refugee women.

Our aim is to build a strong and enduring solidarity network that brings together women from Turkey and Syria; in practice, this means strengthening an existing solidarity platform and transforming it into a sustained network that will not only support women in their particular experiences, but also formulate and develop policies that will protect all women in Turkey from violence, regardless of their legal status.

Related News
21/04/2022
In the Words of Ayşegül Küçükafacan: “Thanks to the small grant by UN Women, I am stronger in combatting violence and abuse”
01/02/2023
Interview: “Non-governmental organizations remain the vital force that drives all action towards ending violence against women”
23/01/2023
Interview: “Women’s organizations need to cooperate directly with local healthcare providers to ensure survivors are adequately supported”
19/01/2023
A new safe space for women opens its doors in Istanbul
20/12/2022
Gender-based violence prevention and response project launched in Tajikistan
END_OF_DOCUMENT_TOKEN_TO_BE_REPLACED