In the words of Sanja Pejović: “Applying a gender perspective contributes to the success of military operations”

Captain Sanja Pejović is the highest-ranking woman officer in the Armed Forces of Montenegro (AF MNE). She is deputy chief of the Sub-centre for Peacekeeping Operations, and a gender equality coordinator for AF MNE. Captain Pejović was the first woman officer to serve in AF MNE. She serves as a regional gender trainer, training military personnel from all over the world, and has actively participated in regional and international projects on the inclusion of gender perspectives in security sector reform. Captain Pejović recently spoke at the Regional Conference "Parliamentarians for gender equality and women's empowerment," organized by UN Women, UNDP, and the OSCE Office for Democratic Institutions and Human Rights (ODIHR) in partnership with the Parliament of the Republic of Moldova and with support from the Government of Sweden. 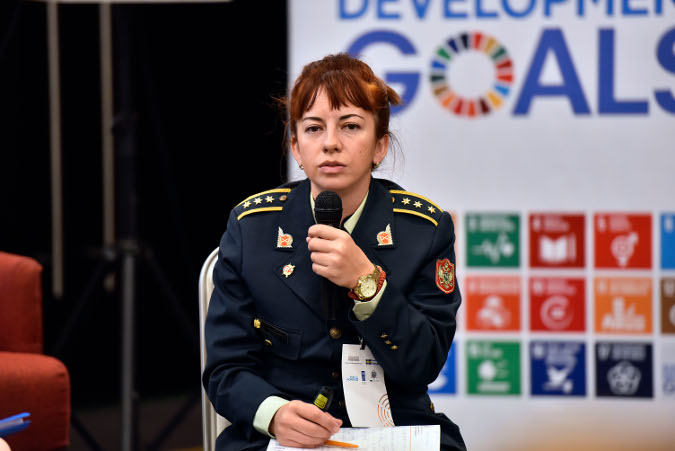 “I’ve always been interested in working in the defense sector. When I was young, I had family members who wore uniforms and I simply liked the idea very much. I still like it.

Working in the defense sector is challenging, interesting and dynamic. I’ve been part of the defense system of Montenegro since 2007. I joined the army and became the first female officer in the Armed Forces of Montenegro (AF MNE) in 2008. At the beginning, it was challenging for me to find my place and role in the system. However, I was willing and determined to learn and work hard. Now I am the first female captain in the AF MNE.

I truly believe that hard work and professionalism bring success to everybody. Loving your job is also a prerequisite for success. That’s why I insist that we have to give younger generations a chance to choose their own career path and not constrain them with gender roles.

Security is important for everyone. All segments of society; women, men, boys and girls; have the right to live in a safe and secure environment. Can we really provide security to the entire population if we have only men working in the security and defense sector? Having in mind the complexity of peacekeeping operations these days, can we provide full protection to everybody, especially the women and children in conflict areas, if we don’t have qualified female and male personnel? The answer is simple– No! New security threats, risks and challenges require new approaches and there is a lot of space for women and men to build and shape our future in a better and more equal way.

We can increase the number of women in the security sector in two ways. First is to raise awareness among women that there is plenty of opportunities within this sector and second is to raise awareness in our institutions and armed forces about the importance and benefits of having equal representation of male and female personnel. Some people are simply not aware that they are living their whole lives constrained by gender stereotypes and this must be changed.

Besides many advantages, there are some challenges when it comes to the integration of women in the security and defense sector. Many of the challenges arise from gender stereotypes, for example stereotypes about women in uniform. Another challenge facing women in the army is parental leave which is still predominantly taken by mothers, and exercises and mission abroad that require women to be away from home. Because of these challenges, women’s careers often advance more slowly than it should or they choose what is believed to be “easier professions” to balance their work and family. However, the overall situation is changing in a positive way.

The current situation in Montenegro is promising. Thanks to its strategic foreign policy goals and national obligations and laws regarding gender equality, defense sector of Montenegro achieved concrete results. We have adopted the National Action Plan for the implementation of the UN Security Council resolution 1325 and we have an Action Plan for the Achievement of Gender Equality.

Ministry of Defense (MoD) uses gender sensitive language, including separate military ranks for women and men. We have two gender coordinators for MoD and AF MNE and MoD has a link on its website called “Women in the Armed Forces.” There are also no restrictions for women to apply to any of the positions in the AF MNE.

Implementing a gender perspective from strategic through to operational down to tactical level is our obligation under mandatory international and national documents and policies. Applying a gender perspective increases operational effectiveness and contributes to the success of military operations. We also have a moral and human obligation to treat everyone in the same way, with dignity and respect.”

Related News
09/03/2021
This is what leadership looks like: How three women mayors in Moldova are making a difference every day
15/10/2020
Three women mayors from rural Moldova speak about how they gained the trust of their citizens
01/06/2020
Women confront pandemic-related violence against women across Europe and Central Asia
21/05/2020
Over 50 women leaders from Moldova met online for #DemocracyTalks to share their experiences as front liners
28/06/2019
Meet the women who want to become the voice of people with special needs from the Republic of Moldova
END_OF_DOCUMENT_TOKEN_TO_BE_REPLACED