In a IPU-organised study visit in partnership with UN Women, Turkish deputies discussed best practices in gender equality – including gender mainstreaming in policies and gender responsive budgeting – with Finnish and Swedish parliamentarians. 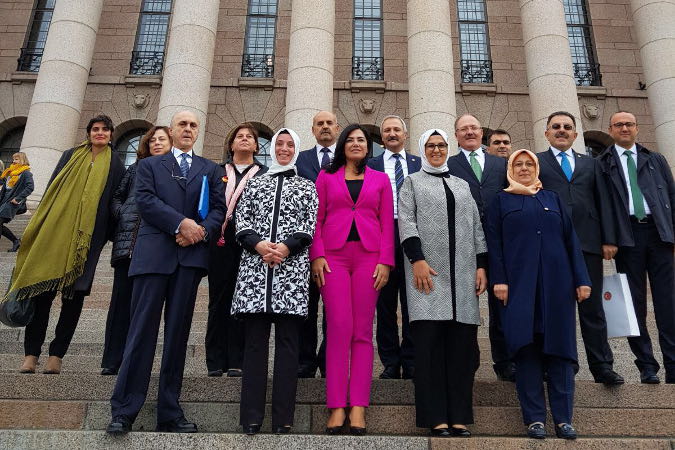 Members of the Committe on Equality of Opportunity for Women and Men of the Turkish Grand National Assembly. Photo: UN Women

On 14-20 September, members of the Committee on Equality of Opportunity for Women and Men (EOC) of the Turkish Grand National Assembly (TGNA) visited the Parliaments of Finland and Sweden to review best practices in gender equality, share information about Turkey’s gender equality work and improve cooperation between gender equality parliamentary committees and bodies of the three countries.

Finland and Sweden are leaders in gender equality, ranking 2nd and 4th respectively in the Global Gender Gap Report of the World Economic Forum.

Led by EOC Chairperson Radiye Sezer Katırcıoğlu, the nine-member Turkish delegation first met with the Head of the Finnish Parliament, its Ombudsman for Equality, International Affairs Group Employment and Equality Committee, the Ministry of Social Affairs and Health, the Council for Gender Equality and the Gender Equality Unit.

They then travelled to Sweden and met with the Head of the Swedish IPU delegation, the Deputy Speaker of the Swedish Parliament and members of the Committee on Labour.

“Turkey has taken important legislative steps in equal opportunity for women and men and is now working so these laws are reflected in real life. Therefore, information and experience sharing is important for us,” said Radiye Sezer Katırcıoğlu.

“The visit helped Turkish deputies gain an in-depth understanding of the gender equality, budgeting and mainstreaming work of the Finnish and Swedish Parliaments. UN Women aims to facilitate the exchange of best practices so a gender perspective is integrated into Turkey’s laws, budgets and policies,” said UN Women Project Manager Neşe Çakır Sayran.