From where I stand: “I was seven-months pregnant when displaced by conflict”

Svitlana Chychyrko was displaced by conflict in eastern Ukraine when she was seven-months pregnant. She delivered her baby away from home and shortly after received news that she had cancer. With determination and support from her peers, she overcame barriers and started a support club for internally displaced women with children. She now advocates for the rights of internally displaced persons (IDPs) in host communities. 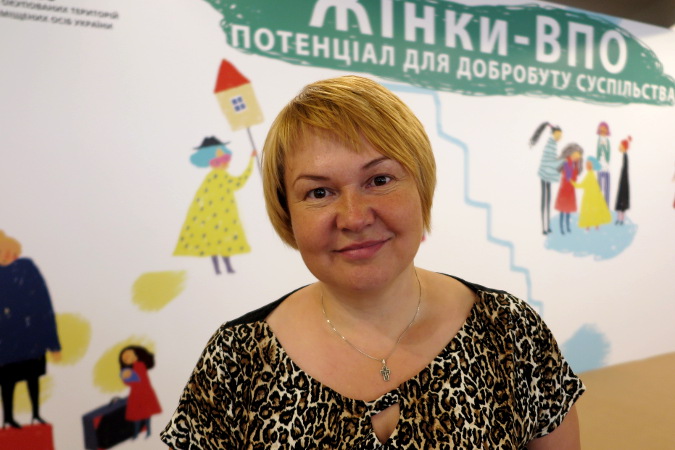 Svitlana Chychyrko at the rehearsal of the performance on women IDPs. Photo: UN Women/Eugenia Kuznetsova

“In June 2014, I went on vacation to the seaside but ended up displaced from home. I was seven-months pregnant. The airport close to my home town was under shelling and I decided to take two weeks off from my work as a culture and tourism specialist at the local council to get some rest. I crossed the front line and went to Berdyansk, a small town by the sea. I never made it back. Our house was damaged from constant shelling. A friend of mine offered me a place to stay in Pavlohrad, a small town nearby. Back then, we thought the war wouldn’t last long.

In September 2014, I gave birth to a girl, Vasylyna. Shortly after, I found out that I had cancer. I spent six months in the hospital. We didn’t receive any state support. There were no state programmes to support internally displaced persons (IDPs). I had to spend all my savings.

I survived, but I felt absolutely drained. I didn’t know where to go and what to do. I didn’t want to see anyone. Then, I saw a call for participants on social media for interactive theatre workshops organised by UN Women and its partner NGO Theatre for Dialogue, and I applied.

It literally changed my life. I realized I was not alone. We talk about “empowerment” at these workshops. Now I understand what it is. I feel empowered. I started a support club for IDPs with children – we called it “From Heart to Heart”. We advocate for important social issues, such as IDP children’s access to kindergartens in new communities. It’s interesting that locals joined us as well. It feels like we are a part of the community now.”

Svitlana Chychyrko runs a social support club for IDPs with children called “From Heart to Heart,” where she advocates for the rights of IDP mothers and their children in new communities. She participated in interactive theatre workshops and performances organized by UN Women and Theatre for Dialogue, where participants, through their performance, identify the barriers impeding their social integration and access to opportunities, resources and decision-making in new communities. They collectively suggest realistic solutions to overcoming these obstacles. Since 2016, more than 60 women IDPs and women from host communities have participated in the workshops in the eastern, western and central parts of Ukraine. Her work directly contributes to Sustainable Development Goals: SDG 16, which promotes peaceful and inclusive societies.

Related News
15/02/2016
Regional gathering helps foster women’s solidarity in their push for peace in Europe and Central Asia
15/02/2016
Peace activists call for more women in peace negotiations and the security sector
04/11/2015
Women must play active role in Ukraine’s peacebuilding and post-conflict recovery efforts, say women’s groups
20/05/2022
Meet Yaroslav, a young Ukrainian refugee with disabilities who dreams of becoming a DJ
19/05/2022
Interview: “The war in Ukraine may be changing the women’s movement, but it’s not stopping it”
END_OF_DOCUMENT_TOKEN_TO_BE_REPLACED