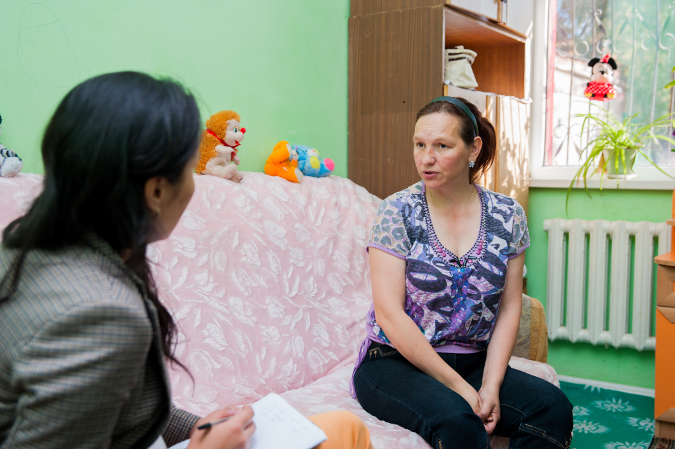 Violence against women and girls remains widespread and a key challenge to achieving gender equality in Central Asia. Adequate support services for victims are rare. As part of its efforts to prevent and respond to violence against women and girls, UN Women supports initiatives that increase survivors’ access to services like Kazakhstan’s non-state domestic violence crisis centres.

On 6 and 7 October in the country’s capital, Astana, the Union of Crisis Centres held a forum to discuss getting more financing for non-government domestic violence crisis centres. Co-organized by UN Women MCO Kazakhstan, the forum Life free from violence in the family as an inviolable right of everyone brought together more than 50 representatives of the Government of the Republic of Kazakhstan, non-state crisis centres, international organizations and NGOs. 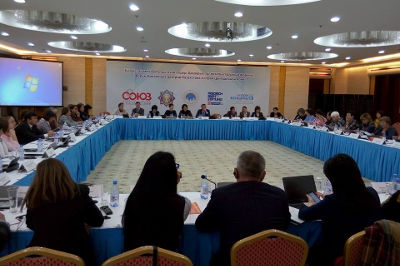 “Crisis centres are not just shelters where women find peace. They are multifunctional centres that provide comprehensive housing, psychological, legal and social support. Kazakhstan’s crisis centres are under-funded, so we set up the crisis centres forum to draw the state’s attention to this problem and to attract sufficient funding,” said Zulfiya Baysakova, chairman of Kazakhstan’s Crisis Centres Union and a member of the advisory group on civil society to UN Women.

In 2015 Kazakhstan’s non-state domestic violence crisis centres got more than 9,000 helpline calls, gave consultations to 8,449 women and placed 592 women in shelters. Despite this heavy workload, these crisis centres receive little or no state funding.

More than a third of the 341,291 crimes committed in 2014 involved violence against women, according the Statistics Committee of the Kazakh Ministry of National Economy. In the first half of 2016, the Ministry of Internal Affairs said that 40,000 women filed reports of violence, and more than 3,500 women referred to crisis centres, both government and private.

Opened by the NGO My Home in 2013, the My Home Crisis Centre in Temirtau, about 185 km from Astana, has given refuge and social, psychological, legal and medical support to more than 300 women in the past three years. For many of them, this was a last chance to return to a normal life.

“Right now, eight people are staying with us, three women and five children. One woman is pregnant. At some point, each one of them slept rough and had no place to stay. They came here, we heard their stories and could not turn them away,” said My Home director Irina Zhdanova. 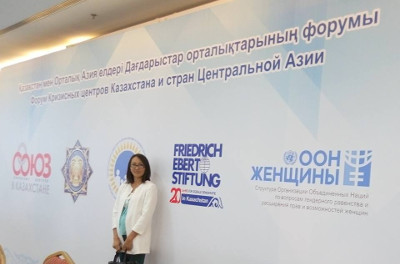 Participant of a Forum of Crisis Centres. Photo: Ainagul Bekebayeva

Marina, for example, was brought to the My Home Crisis Centre by her mother-in-law after her husband beat her while she was pregnant with their fourth child, as she was holding their three-year old daughter in her arms. To that point, with her two other children in an orphanage, Marina’s life was one of endless violence at the hands of her husband, step-brothers and employer and despair.

“I wanted to take my own life, and wondered why my fate was so unfortunate,” says Marina.

“When Marina came here, she had no documents,” said Ms. Zhdanova. “She didn’t know her basic rights or that she was entitled to child benefits.”

At the My Home Crisis Centre, Marina received legal and psychological support and basic health care. She gave birth to a daughter, brought back another daughter from the orphanage – and learned her rights and what to do and where to go next time her husband tries to beat her.

“Here, I have found my calm and freedom, and learned to trust people and be resilient,” said Marina.

Now, thanks to the My Home Crisis Centre, Marina has a residence permit and gotten her children’s missing birth certificates. This has allowed her to join the housing waiting list, apply for benefits, get her children in a kindergarten – and start working on a better life, free from violence.

Related News
06/04/2020
In a Serbian town, survivors of domestic violence are sewing face masks for those in the front line of COVID-19 response
06/12/2018
Press Release: International Conference on “Prevention of Domestic Violence through Effective Cooperation: New Step in Development of Crisis Centres”
30/08/2017
In the words of Aliya Assanova: “I encourage women who are subject to violence to speak out”
28/08/2017
Kazakhstan’s new plan to end domestic violence demonstrates multi-disciplinary action
21/06/2017
New home gives hope to domestic violence survivors in Kosovo*
END_OF_DOCUMENT_TOKEN_TO_BE_REPLACED