On and around 8 March 2016, countries across the Europe and Central Asia region will join the global call for a Planet 50-50 by 2030. In honour of International Women’s Day, UN Women is organizing a series of diverse, high-profile events in the region, where ordinary citizens, government officials, activists, students, security personnel, scholars and stock exchange officials will be among those who commit to “Stepping It Up for Gender Equality.”

Albanians celebrate International Women’s Day with a range of activities 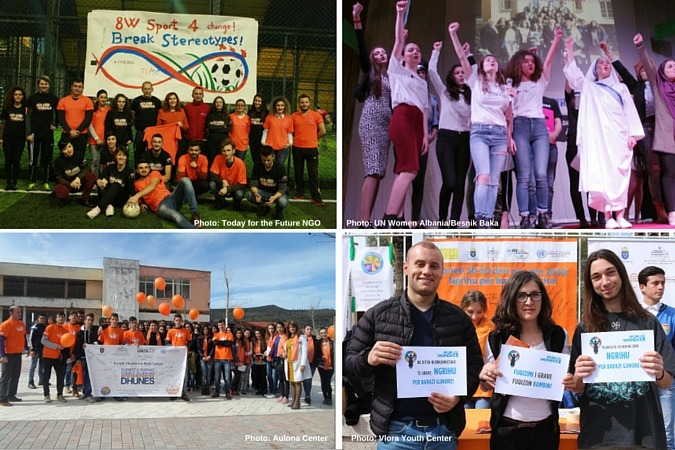 Albanians celebrate International Women's Day with a range of activities.

To mark International Women’s Day around 60 people including students, teachers and local officials marched for women’s rights in Selenica, a city in the south of Albania.

In the small town of Rreshen, young girls and boys raised their voice for more rights and freedoms for women and girls. They asked, "If not now, when? If not me, then who?" Around 500 people participated at the event.

Artists, students and activists organized a football match as Goodwill Ambassadors for Gender Equality to say no to gender stereotypes.

To mark International Women’s Day, UN Women and the EUFOR Mission to Bosnia and Herzegovina released two videos to promote gender equality in the armed forces and in the society at large. The videos, Women, Peace and Security, and HeForShe, star female and male military staff from both EUFOR and Bosnia and Herzegovina. Both videos stress the indispensable need to include women in military undertakings – and throughout society. Read more. 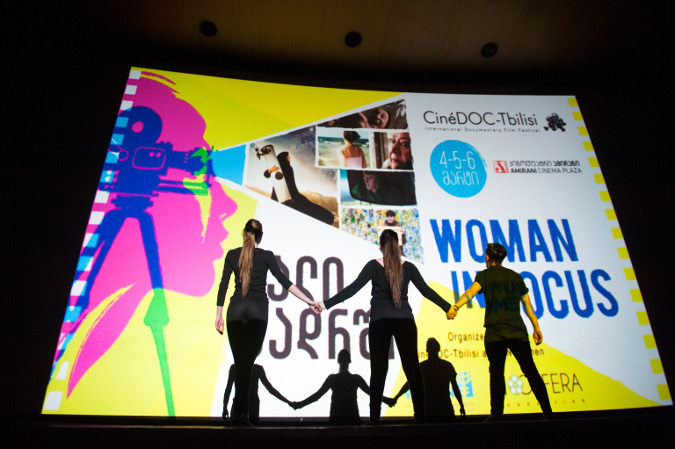 In Georgia, UN Women in partnership with the Noosfera Foundation hosted a documentary film festival “Woman in Focus” from 4 to 6 March for International Women’s Day. The films presented during the festival were mostly directed by female film directors from a variety of countries, including Denmark, Georgia, Israel, Poland and Belgium and focused on women’s and girls’ lives and rights. Read more. 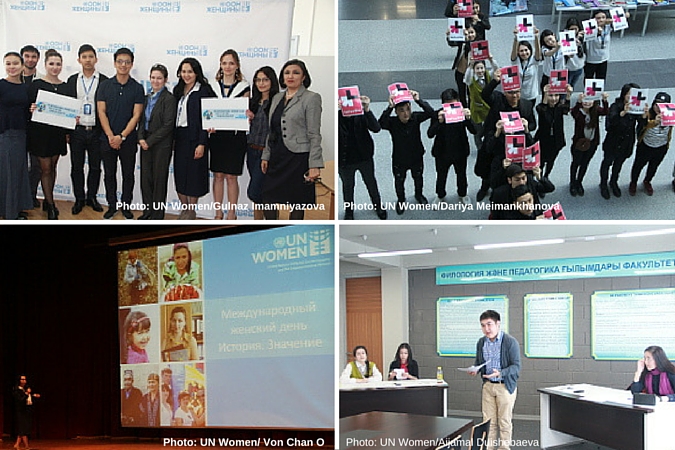 As part of International Women’s Day activities, UN Women Multi-Country Office in Kazakhstan and Suleiman Demirel University organized a range of activities including a debate on gender policy of Kazakhstan, a HeForShe flashmob, a presentation on the state of gender equality in Kazakhstan, a concert and a movie screening. Separately, UN Women MCO Kazakhstan and a prominent Kazakhstani cinema critic Oleg Boretskiy jointly organized a film screening of "Iron Jawed Angels" in Almaty, which was followed by a vivid discussion. The film focuses on the American women's suffrage movement during the 1910s, led by Alice Paul and Lucy Burns, which led to women gaining the right to vote. Also, a Step It Up For Gender Equality press conference was held in Almaty on International Women's Day. 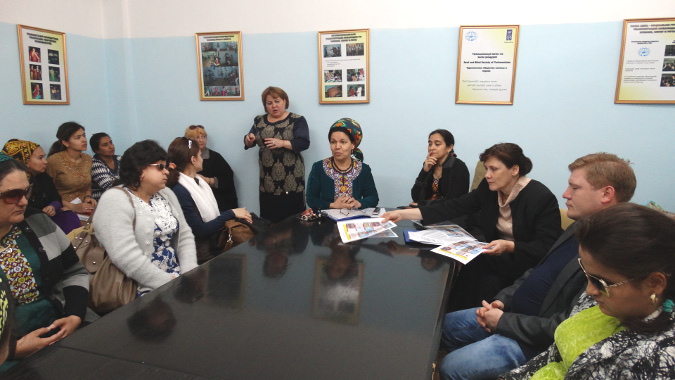 To mark International Women’s Day, a seminar on the role and position of women in Kosovan society was held at the Haxhi Zeka University. More than 50 students participated in the event, where UN Women addressed the issue of gender-based violence. UN Women office in Kosovo also organized a round-table discussion with students on women’s right in Kosovo at the University of Pristina. UN Women brought together more than 20 members of the Security and Gender Group, a multi-stakeholder group composed by nine UN agencies, the EU office, EU Rule of Law Mission, the Nato Kosovo Force, OSCE, UN Interim Administration in Kosovo, Kosovo governmental institutions and CSOs, to discuss how to integrate gender equality into strategic plans in line with the Sustainable Development Goals. 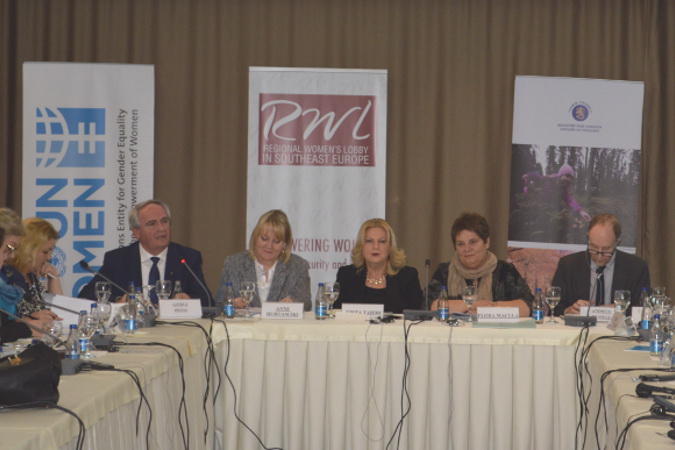 Gjergj Dedaj, deputy Minister for Local Self – Governance addressing participants of the conference on the issue of gender equality and EU Integration. Photo: UN Women/Rudine Jakupi

Women leaders and decision makers from three minority communities in Kosovo, Gracanica, Novo Brdo and Shtrpce, including women from North and South Mitrovica, came together with representatives of government institutions in Kosovo, MPs, mayors and representatives of civil society and international organizations to share the concerns of minority women in their communities and their recommendations for the EU integration process. The event “Kosovan Women Working Together for European Integration” was organized by the Regional Women's Lobby for Peace, Security and Justice in Southeast Europe (RWL SEE) in partnership with UN Women and was funded by the Embassy of Finland in Kosovo. 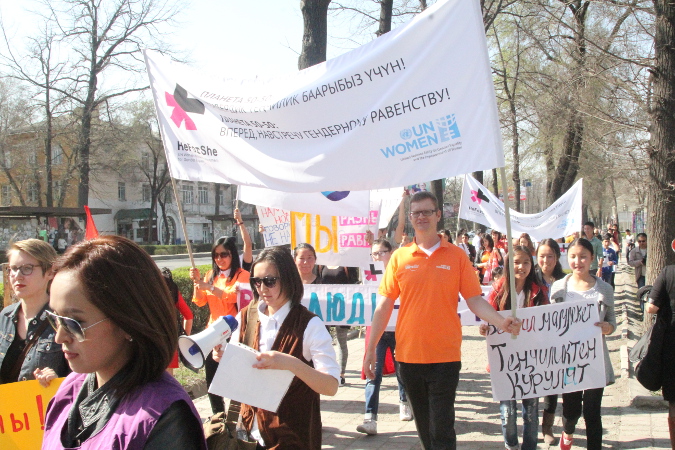 About 80 gender equality champions including activists, representatives of the civil society, international organizations, national movements and the parliament marched to draw public attention to the situation of women in the Kyrgyz Republic and call all everyone to “Step it Up” by taking concrete actions to advance gender equality. The march was organized by the UNiTE movement in the country and included young gender equality advocates, supported by UN Women, who used this opportunity to demonstrate their solidarity with the gender activists and the HeForShe movement. Read more. 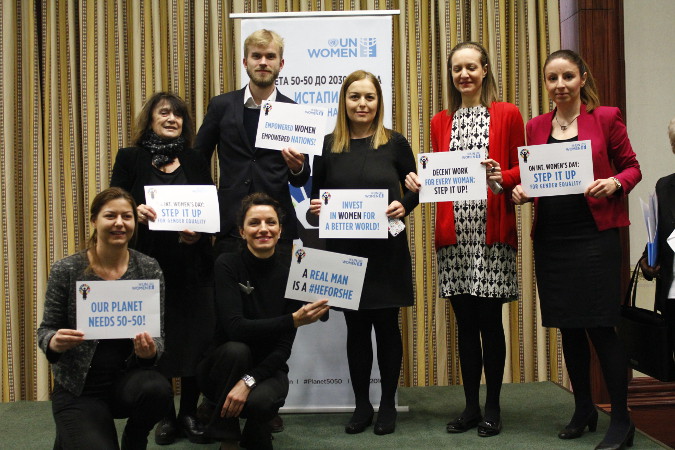 On International Women’s Day, over 100 representatives of the Government, the UN, civil society, experts and academia in the former Yugoslav Republic of Macedonia gathered to reflect on the progress made since the adoption of the Law on Equal Opportunities between Women and Men in 2006. They discussed important challenges ahead to close the gender gap and develop budgets that would advance gender equality. In the evening of 8th of March, the seventh edition of the Women’s Rights Nights was officially launched. Initiated by the UN Women office in Skopje in 2010, Women’s Rights Nights transformed into a traditional event organized by the city of Skopje every year. Read more. 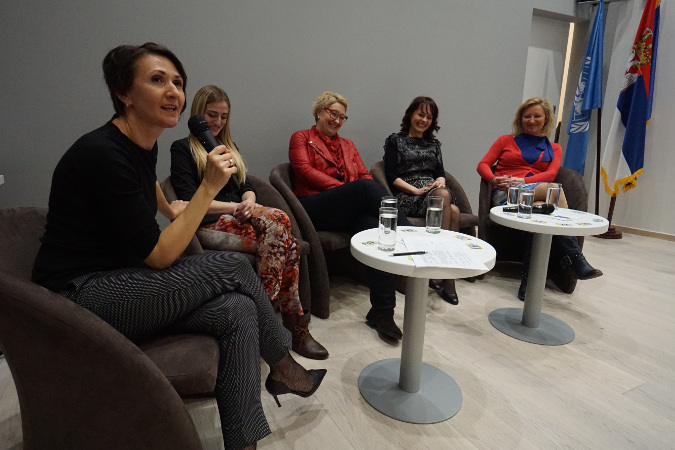 On the occasion of International Women’s Day, the UN and CSO Centre of Modern Skills jointly organized a campaign dedicated to highlighting the unequal position of women in a society, particularly in the areas of labour and employment. Bringing attention to the inequalities faced by women on a daily basis and to promote women’s rights, leaflets containing data about the gender gap in Serbia were distributed on the streets of Belgrade as part of the campaign. A panel discussion was also organized where four women who built their careers in typically ‘male’ occupations, namely a pilot, a firefighter, a mountain rescuer and an orchestra trumpeter, discussed their personal experience in overcoming traditional gender roles imposed by the society. Read more. 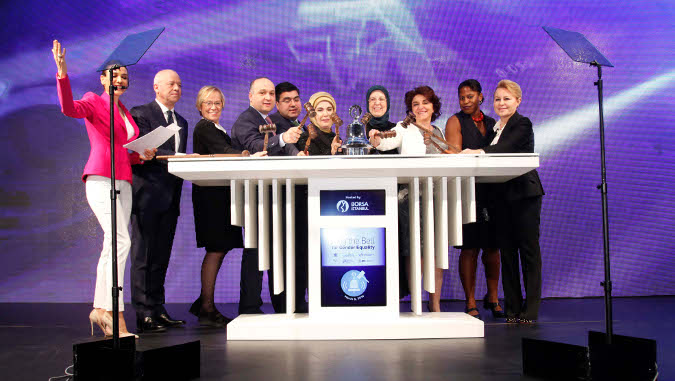 On International Women’s Day, UN Women, UN Global Compact, IFC and Borsa Istanbul (former Istanbul Stock Exchange) came together to organize an opening bell ceremony to highlight the importance of gender equality and women’s empowerment to sustainable development and business. The First Lady of Turkey, Ms. Emine Erdogan and the Minister of Family and Social Policies, Ms. Sema Ramazanoğlu joined the bell ringing ceremony where 33 new companies that signed the Women’s Empowerment Principles (WEPs) were announced. The total number of WEPs signatories in Turkey has increased to 83 now making it the 4th country in the world with the highest number of WEPs signatories. Read more. 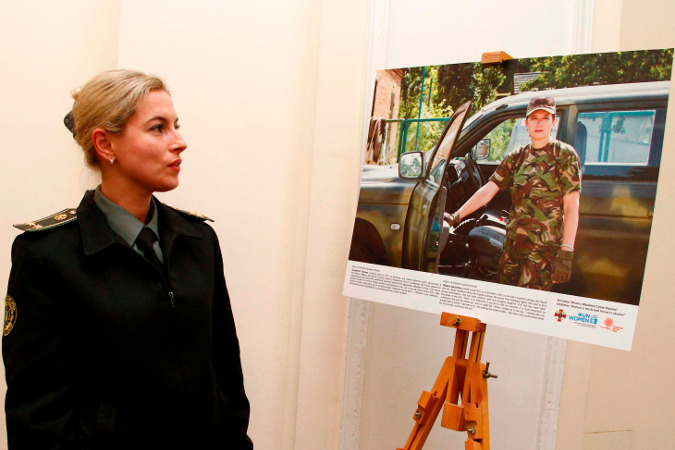 Organized by UN Women and the Ukrainian Women’s Fund in collaboration with the Ministry of Defense, the exhibition Women in Armed Forces in Ukraine showcases 20 women currently serving in the armed forces and anti-terrorist operations and recognises the significant contribution women make to Ukraine’s defence, security and anti-terrorist operations. Stepping up its commitment to promote women’s rights in its armed forces, Ukraine will soon name a gender advisor to the Minister of Defence. The announcement came shortly after the cabinet of ministers adopted the first National Action Plan to implement UN Security Council Resolution (UNSCR) 1325 on Women, Peace and Security on 24 February 2016. Read more.