Central Asian Fathers Are HeForShe...and want others to be, too

Fighting for their daughters and for gender equality everywhere, Central Asian fathers post their hopes for the future and call on others to join UN Women’s HeForShe campaign. 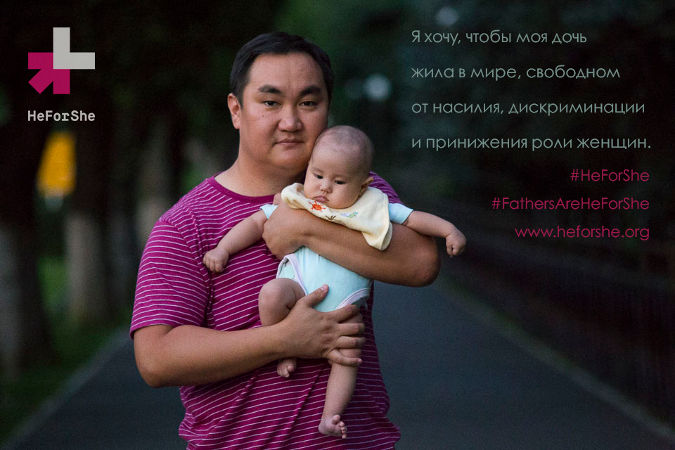 Kubat, Kazakhstan: “I want my daughter to live in a world free from violence, discrimination and the belittling of women”. Photo: UN Women Multi-country office in Kazakhstan

Almaty (Kazakhstan)  - On 11 October, the International Day of the Girl Child, Central Asia fathers helped launch a local HeForShe campaign by sharing their views on the world they’d like for their daughters – and by calling on other fathers to join them in the HeForShe campaign.

"I want my daughter to live in a world where her rights are respected. I want her to make her own choice of profession, of husband and live the life that she wants to," posted Kubat from Kazakhstan at the event. Another, Amir from Tajikistan said: “I want a decent future for my daughter, so she has equal rights and equal opportunities in her education, career and personal life.” 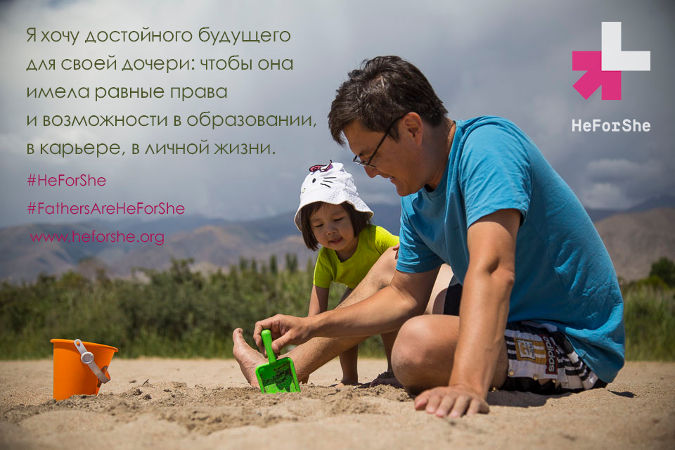 Erkin, Kyrgyzstan: “I want a decent future for my daughter, so she has equal rights and equal opportunities in her education, career and personal life”. Photo: Photo: UN Women Multi-country office in Kazakhstan

At the event, the UN Women Multi-Country Office in Kazakhstan (Central Asia) launched a video that called on fathers to join the HeForShe campaign and post photos or write postcards in support under the hashtags #FathersAreHeForShe and #HeForShe.

"Central Asia is a region with strong family ties. Fathers in the region want a decent future for their daughters and for women everywhere to live in a world free from violence and discrimination against women," said Ms. Elaine Conkievich, Representative for the UN Women Multi-Country Office in Kazakhstan, which covers Kazakhstan, Tajikistan, Turkmenistan , and Uzbekistan. 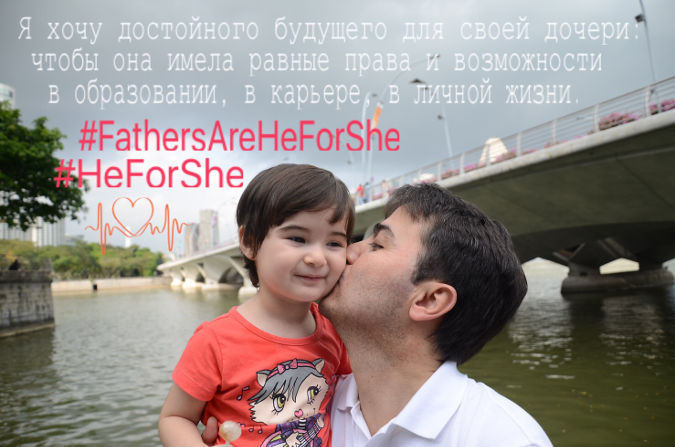 Initiated by UN Women, HeForShe is a global campaign for gender equality that encourages men and boys to take action against gender inequality, which has deep social, economic and political costs for women and men everywhere. HeForShe engages men to act as role models in the fight for gender equality, a human rights issue that affects all – women and girls, men and boys. 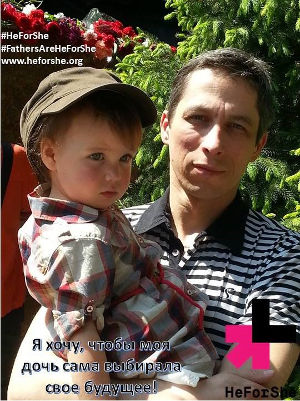 Dmitriy, Kazakhstan: “I want my daughter to choose her future on her own!” Photo: UN Women Multi-country office in Kazakhstan

Getting the men of Central Asia to commit to gender equality is important. Throughout Central Asia, women are disproportionately affected by poverty, gender discrimination, persistent wage gaps between women and men, exploitation and limited opportunities for career advancement. Limited economic opportunities for women limit economic potential for all. Gender-based discrimination in the private space is widespread. In addition, the revival of some cultural and social practices, often mistakenly interpreted as part of religious customs, are placing discriminatory restrictions on women’s rights to control their lives and bodies.

Noting that everyone benefits socially, politically and economically when gender equality is respected, participating fathers called on other fathers to join them by signing up at the HeForShe website and posting photos with their daughters.

“I would like my girls to have equal rights and equal opportunities to get quality health care, education, and employment. I would like them to create their families in a world with equal conditions for women,” posted Evgeniy from Kyrgyzstan.