Breaking the silence: Survivors of violence tell how they used their experience to enact change

Cathy Eatock is an aboriginal woman and survivor of child sexual assault who pressed charges against her assailant despite resistance from her own community. She has since worked tirelessly on policies to protect women and children from abuse and defend the rights of indigenous peoples. She is now Senior Policy Officer for the Minister for Aboriginal Affairs of the Government of Australia.

“My own experience raised a number of issues around legislative and policy approaches which I've since highlighted, she recounted. She was one of five women who spoke at a Survivor's Forum about how they have used their own experiences with violence to successfully promote legislation or public policy reforms in their country. 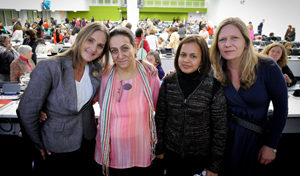 Four of the survivors who spoke at the Forum (from left to right) were: Autumn Burris, Sacide Akkaya, Mayerlis Angarita, and Cathy Eatock. Photo: UN Women/Catianne Tijerina

Their panel was part of the Stakeholders' Forum on Preventing and Eliminating Violence against Women, organized by UN Women and held from 13-14 December in New York. The event aimed to foster dialogue, build alliances and provide a platform for sharing strategies that yield results.

“This month I was the subject of two attacks; one with firearms, the other where the paramilitary attacked us, recounted a passionate Mayerlis Angarita, a survivor of conflict-related violence and activist from Colombia who founded the Narrating for Living Foundation (Fundación Narrar para Vivir). Her non-governmental organization successfully influenced the Victims and Land Restitution Law passed by the Colombian Congress in 2011, which established women's rights to land.

“We went, as a group of 17 women, to the Congress to present our vision for the new law and we achieved the inclusion of a gender perspective in the chapter on land restitution, reflects Mayerlis (for more, watch her video interview in Spanish). “It is also a testimony to … what armed conflict has caused and how they used our bodies as a tool of war. … The struggle wasn't easy… But we have had an effect.

From Turkey, Sacide Akkaya is a survivor of domestic violence and a prominent activist with the women's organization KA-MER. She has been fighting against honour killings and contributed strongly to a decree to prevent violence against women, which came into force on 8 March 2012. “Almost 70 percent of the things we proposed have been included in the law, she said, stressing that her organization continues to lobby for changes.

“I think to have these survivors voices on this panel is ground-breaking and I want to thank UN Women for having this insight, said Autumn Burris, a survivor of sexual assault, rape, sexual exploitation and domestic violence from the United States of America. Burris was instrumental in providing leadership, for many years, at Standing Against Global Exploitation (SAGE) – an organization located in San Francisco which has lobbied strongly for a law against trafficking in the United States. “Some of the challenges are the lack of survivor-informed policies and services, lack of survivor-informed programmes, and coordination between governments and NGOs, she said.

Through a video statement from Brazil, Maria da Penha told her story of perseverance. A survivor of domestic violence, she survived two murder attempts by her husband in 1983, which left her paralyzed. “We lived a life filled with physical and psychological violence, and I could not get out of that relationship because, at that time … women were killed when they tried to leave a violent relationship. … In general, the aggressor got away without penalty.

Maria persisted despite two decades of unsuccessful legal battles against her husband, who was eventually freed on technicalities. She wrote a book and teamed up with two NGOs who helped take her case to the Inter-American Commission for Human Rights. In 2001, the Commission ruled against Brazil, ordering the country to establish a national law to prevent domestic violence. Enacted in August of 2006, the law was officially named after Maria da Penha

The Stakeholders' Forum was organized in preparation for the 57th session of the Commission on the Status of Women in March 2013. The international gathering where countries report on their country's progress on women's rights and gender equality will focus on preventing and eliminating violence against women and girls.

Related News
21/04/2022
In the Words of Ayşegül Küçükafacan: “Thanks to the small grant by UN Women, I am stronger in combatting violence and abuse”
22/05/2017
Call for Proposals: Regional Forum for the Promotion and Monitoring Progress of the Implementation of Istanbul Convention in Western Balkans and Turkey
22/05/2017
Call for Proposals: Support the establishment and strengthening of regional platforms of civil society organizations
04/12/2015
High-level global UN meeting to focus on ending violence against women
26/11/2015
Istanbul goes orange
END_OF_DOCUMENT_TOKEN_TO_BE_REPLACED